The Last High by Daniel Kalla 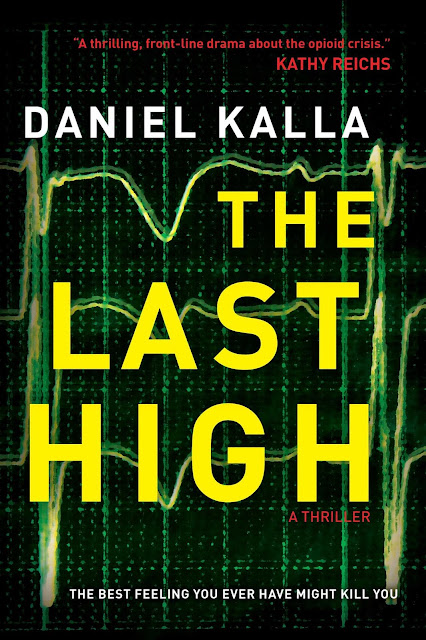 The Last High: A Thriller by Daniel Kalla
Simon & Schuster, May 2020

A medical thriller about the opioid crisis, set in Vancouver.

Who would have guessed that as part of the Shadow Giller project I would read three books in a row that are partly set in the Downtown Eastside neighbourhood of Vancouver? Five Little Indians, No Going Back, and now this. One of the things I appreciate about The Last High is the way it shows the broad spectrum of people who are addicted to opioids. While some are junkies living on the streets, others are wealthy lawyers, project development entrepreneurs, medical doctors, or high school students from stable families.

Julie Rees, an ER doctor and non-using drug addict, is the central character. Author Daniel Kalla is also an emergency room doctor, so I trust the medical details. Like Kaie Kellough does in Dominoes at the Crossroads, the author slips reference to himself into the prose:

"Why do you work two jobs? Is there some issue with the ER doc's union?"
"The issue is we don't have one." She laughs. "I don't work full-time ER. A lot of us at St Mike's have secondary interests. We have two docs who do ICU part-time. And two others who also work palliative care on the side. One guy even writes books -- medical thrillers -- they're not half bad. I happen to have specialized training in toxicology. It's a nice balance, actually."

A particularly lethal form of fentanyl is suspected when overdoses aren't responsive to the naloxone antidote. Opioids are explained:

"All these opioids -- whether you're talking morphine, heroin or the fentanyls -- basically work the same way." She knows it's an oversimplification, but she doesn't want to get bogged down in the insignificant differences in the drugs' actions. "It boils down to potency that separates one from the other. Fentanyl is about a hundred times more potent than heroin. But carfentanil? It's a hundred times more powerful than fentanyl... "
"So we're talking ten thousand times as strong as heroin?"
"Exactly. The stuff was developed for tranquilizing elephants. Literally. A single grain of it can kill a person."

Illegal drugs and their distribution, loan sharking, money laundering: a snarl of criminal gang underworld activities are integral to the plot. There's also a romance developing between Julie and a police detective, Anson Chen. Canadian identity comes up at a dinner party:

Dinner is served over several courses while they discuss everything from politics to films, and even take time to compare their upbringings. Maria grew up comfortably in Manila, the daughter of two doctors, while Goran's parents struggled as farmers in Communist-era Yugoslavia.
After Julie mentions that her dad's parents emigrated from Wales, Anson folds his hands together and proudly announces, "I guess that makes me the most Canadian at this table."
"How do you reach that conclusion?" Goran asks.
"Well, my dad's parents came here from Hong Kong when he was a kid, but my mom's parents were born here. By my calculation, that makes me third-generation Canadian."
Goran laughs. "You win, then."
Anson's expression turns serious. "Never really felt it, though. I always had a bit of an outsider's complex. Like I always had something to prove."

The dinner conversation turns to the recent spate of overdose deaths, until one of them asks, "Can we please talk about Trump instead?"

Giller chances: LOW - While this novel is well-written and will suit anyone looking for an entertaining and informative thriller, there isn't that special quality that would shift it into literary award territory.