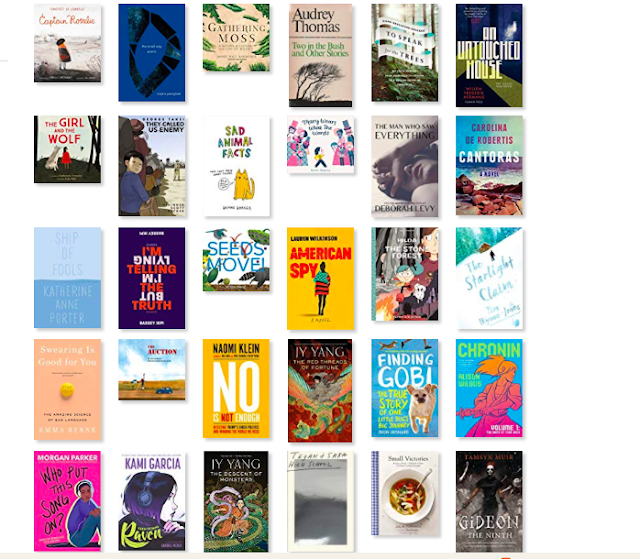 Here are some of my favourites from December 2019. These include some older titles, children's picture books, audiobooks, poetry, short stories, novels and nonfiction. Surprisingly (because I don't seek out books about war), five of them have to do with world wars. Four have queer content, two are created by Indigenous women, and two are in translation from other languages. It's my typical eclectic mix.

In this graceful, heartfelt collection, Onjana Yawnghwe, a Shan Canadian, writes about recovering from the breakup of a relationship, during the period of time that her husband transitioned to a woman. Striking imagery connects the timeless mysteries of the cosmos to the depths of our inner lives. The book (Caitlin Press) has a beautiful cover with a rubberized treatment that accentuates its rich blue colour.

Scientists know little about dark matter, and much less about dark energy, which makes up ninety-six percent of the world beyond earth. We know these things exist because light bends towards and becomes curved.
What exists between two people I know little of. But by the bending my heart I know a kind of truth.
---------------
Dead Name
For a period of a few months I don't know what to call you. You have chosen a name, Hazel, from a shortlist we brainstorm together. Vivian, Irene, Ava. Hazel is botanical and somehow suits you. I rehearse the name on my tongue; it comes out hesitantly, with a fade in the beginning and a question mark at the end. The feeling of a borrowed coat. It tastes of sweetened coffee but is lukewarm and strange in my mouth.
---------------
You had a psychologist and your trans
support group, and the handful of
work friends and family you'd told.
I was tethered to a particular silence
of the lonely, of the inexplicable.
Dimensions shifted: instead of time
and space, uncertainty and doubt.
Secrets were imposed on me,
it was not my place to tell.
Tears stay close to the skin.
Drop by drop, the sea accumulates.

A handful of lesbians create community and relative safety with each other while living under the brutal oppression of military dictatorship in Uruguay. This immersive novel shines with warmth and humanity, and spans decades—1977 to 2013—documenting changes in society along the way.

“I think silence killed her.”
“Yes,” Diana said. “That is the way of silence.”
“What do you mean?” La Venus said gently, knowing there was more beneath the surface.
“That the silence of the dictatorship, the silence of the closet, as we call it now—all of that is layered like blankets that muffle you until you cannot breathe.”

Two in the Bush and Other Stories by Audrey Thomas

I loved everything about this feminist collection of short stories by award-winning Canadian author Audrey Thomas. The richly-evoked settings vary from Ghana to Galiano Island to Mexico and Scotland. The prose style also varies, including stream of consciousness, multiple viewpoints and epistolary. The stories are sometimes enigmatic, yet always offer the pleasure of carefully crafted sentences. Best is that they are about women‘s lives and seem to live on almost like novels in my head.
A big thank you to Shawn Mooney (of Shawn the Book Maniac) who gifted this to me and then buddy-read it with me through the month of December.

He and his first wife had been so shy, so horribly reticent about their bodies. It had nearly killed him. It would, in the end, have killed him. She had written him long, hysterical letters, proclaiming her love, her unhappiness, her desire to try again. Or presenting him with past hurts like unpaid bills.
---------------
The continual muttering in the long ward grew louder, rumbled like a vast stomach as the orderly ladled porridge into plastic cups, stacked up in small towers the toast that had been made three hours before and margarined hastily before dawn.

A powerful and immersive novel set in 1931 aboard a German ship travelling for a month between Mexico and Germany, with sharp insights into the frailties of a large cast of characters who are together at close quarters. Katherine Anne Porter wrote: “I believe that human beings are capable of total evil, but no one has ever been totally good; and this gives the edge to evil.”

The past is never where you think you left it: you are not the same person you were yesterday.
-----------------
People can't hear anything except when it's nonsense. Then they hear every word. If you try to talk sense, they think you don't mean it, or don't know anything anyway, or it's not true, or it's against religion, or it's not what they are used to reading in the newspapers...

Star Trek actor and gay rights activist George Takei was a child in 1942. That's when the US government ordered all Japanese Americans be sent to prison camps in the interior of the country. This gripping memoir in comics format shows that experience from his small boy‘s perspective as well as looking back with the understanding of an adult. Takei learned about loyalty and integrity from his parents during these hard years and those that followed the war. Excellent art and pacing by cartoonist Harmony Becker. Outstanding delivery of history and memoir.


The Man Who Saw Everything by Deborah Levy

“While he listened to my heart murmur and mope, I understood his ears were the listening device hidden inside and outside his head.” This looping, layered novel explores the many ways of seeing and being watched. The bisexual character of the title does not see much. He is beautiful and extremely self-absorbed. Levy‘s lithe, warm prose playfully reveals his gradual realization of how his behaviour affects others and how he fits in the world. 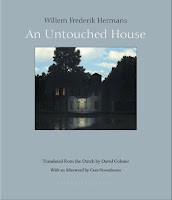 Told in the singular voice of a Dutch partisan who‘s fed up with the chaos of war and having no control over his life, this novella with its clear, unsentimental prose is one of the best depictions I‘ve read concerning the senselessness of war and how it can deform human minds.

“Culture gives no quarter! Extraordinary circumstances are only an excuse! Someone who gives in to extraordinary circumstances, nah! He is simply no longer a person of culture!”
I said nothing.
“In the last war the British barrage began one morning at 6:15. At 6:30 I began shaving. It was too dark in the trench, so I moved to higher ground. That cost me half my little finger. But at 7:30 I was sitting down to eat breakfast!” 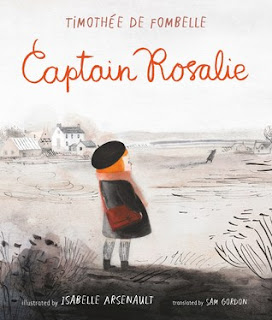 A five-year-old in France lives a rich imaginary life while her father is away fighting in the First World War. The poignancy of her story and her limited point of view are perfectly matched with Isabelle Arsenault‘s moody illustrations. Spots of fiery orange brighten the bleak grey and brown washes of ink. A heartbreaking coming-of-age story for ages six to adult.

To Speak for the Trees: My Life's Journey from Ancient Celtic Wisdom to a Healing Vision of the Forest by Diana Beresford-Kroeger
Audiobook [9 h] narrated by the author

After Diana Beresford-Kroger was orphaned at a young age in Ireland, she was taught Celtic wisdom by her maternal ancestors. She eventually became a respected botanist and moved to Canada with her husband, where she encountered universities who wouldn't hire women -- some of this memoir reminded me of Hope Jahren's Lab Girl. Undaunted, Diana has carried out her own research and is an expert on global forest ecology. Gentle, impassioned and poetic, she shares her vision of the future for our planet in this audiobook.

I want to remind you that the forest is far more than a source of timber. It is our collective medicine cabinet. It is our lungs. It is the regulatory system for our climate and our oceans. It is the mantle of our planet. It is the health and well-being of our children and grandchildren. It is our sacred home. It is our salvation.

Gathering Moss: A Natural and Cultural History of Mosses by Robin Wall Kimmerer
Audiobook [8 h] narrated by the author 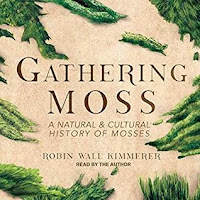 Potawatomi author Robin Wall Kimmerer‘s enthusiasm for moss is infectious and I learned fascinating things about a subject I hadn‘t much thought about previously. This collection of essays combines memoir, Indigenous teachings and scientific knowledge for general readers. She writes about humankind‘s relationship to the natural world and the important gifts that even such humble things as moss have to contribute to the ecological system.

There is an ancient conversation going on between mosses and rocks, poetry to be sure. About light and shadow and the drift of continents. This is what has been called the “dialect of moss on stone - an interface of immensity and minuteness, of past and present, softness and hardness, stillness and vibrancy, yin and yan.“
------------------
I think you cannot own a thing and love it at the same time. Owning diminishes the innate sovereignty of a thing, enriching the possessor and reducing the possessed.
------------------
Moss leaves are only one cell thick.

The Girl and the Wolf by Katherena Vermette and Julie Flett 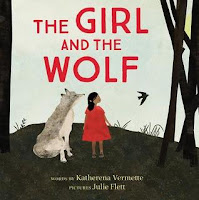 This children‘s picture book is a collaboration between two talented Canadian Métis women and it is absolutely wonderful. The Red Riding Hood tale is turned upside down with a wolf who is a helping spirit, quietly encouraging a lost girl to rescue herself. The gorgeous art, contemporary setting and the extrinsic significance of the red dress (MMIW: Missing and Murdered Indigenous Women) add power to the underlying message. All ages. 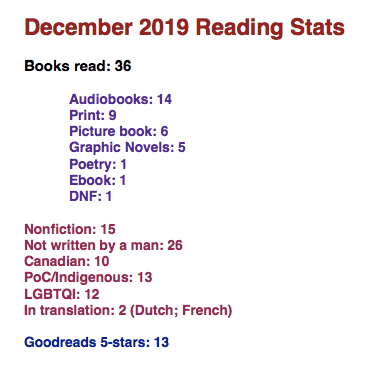