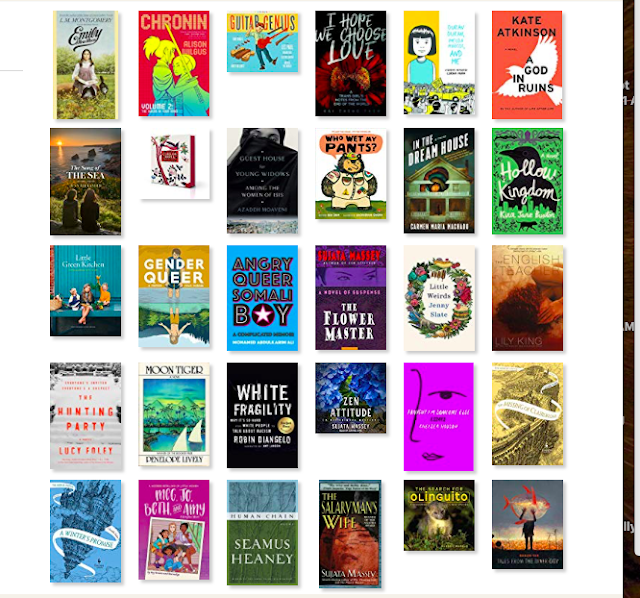 Here are some memorable reads from the first month of 2020:

What is the meaning of an individual life, specifically when viewed through the lens of war? Kate Atkinson creates vivid fictional characters, beguiles with her sentence wizardry and treats time like a plaything. I have loved pretty much all of Atkinson‘s other books and it appears that I have saved the best for last. An outstanding buddy read with my friend Shawn the Book Maniac.

Poor mice, he had thought when he was a boy. Still thought the same now that he was a man. Nursery rhymes were brutal affairs.
------
“I heard they take drugs and dance naked in the moonlight,” the farmer said. (True, although it wasn‘t as interesting as it sounded.)
------
She drew heavily on the cigarette and then, in a touching display of maternal responsibility, lifted her chin so that the smoke blew over her children‘s heads. When she got pregnant the first time, Viola had no idea what it would involve further down the line. She wasn‘t sure she‘d ever seen a baby, let alone held one, and imagined it would be like getting a cat, or, at worst, a puppy. (Turned out it was nothing like either.)
------
She had worked on herself. Years of therapy and fresh starts, although nothing that really required an effort on her part. She wanted someone else to effect change in her. It seemed a shame you couldn‘t just get an injection that would suddenly make everything all right. (“Try heroin,” Bertie [her daughter] said.)
------
His grandfather was a hero too, wasn‘t he? He‘d had a life. Sunny wondered how you went about getting one of those.
------
The Great War had made Sylvie into a pacifist, albeit a rather belligerent one.
------
He had seen the bull with the cows and Maurice had said that was what people did too, including their mother and father, he sniggered. Teddy was pretty sure he was lying. Hugh and Sylvie were far too dignified for such acrobatics.

I Hope We Choose Love: A Trans Girl's Notes from the End of the World by Kai Cheng Thom

Fierce, compassionate and thoughtful essays and poems about interpersonal relationships within the social justice movement and queer communities. Canadian Kai Cheng Thom advocates for nuance where, too often, issues are seen as either right or wrong.

When it comes to trans folks, people are always talking about gender dysphoria—dislike or hatred of the body or self. I want to talk about gender euphoria—the state of joy or delight in your being, your gender presentation.
------
We must encourage love—love that is radical, love that digs deep. Love that asks the hard questions, that is ready to listen to the whole story and keep loving anyway. […] Love for the community that has failed us all. We live in poison. The planet is dying. We can choose to consume each other or we can choose love. Even in the midst of despair, there is always a choice. I hope we choose love. 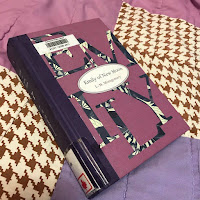 Dear, dear little Emily Starr, an orphan so full of wonder and life. Her spunk, integrity, loyalty, love of words and willingness to stand up for herself make her a charming heroine in this Canadian classic. It's been decades since I first read this. I am grateful to Christine, aka TheBookHippie on Litsy, for selecting it as a read-along for January in her year-long project of reading children's classics, open to anyone who wants to join in. Emily has 31 chapters, so it worked out perfectly to read one chapter per day.
(February's pick is much shorter: The Reluctant Dragon by Kenneth Grahame.)

Elizabeth Murray had learned an important lesson—that there was not one law of fairness for children and another for grownups.
------
It is very exciting to be up on the roof of a house. We had a yelling contest there the other night to see which could yell the loudest. To my surprise I found I could. You never can tell what you can do till you try.

Tales from the Inner City by Shaun Tan 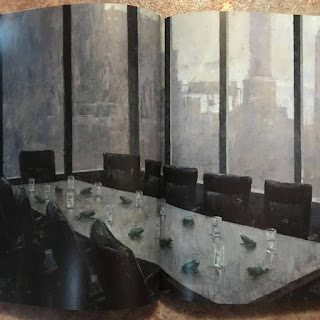 “One afternoon the members of the board all turned into frogs.” The premise behind each piece of short fiction or poetry in this collection is highly imaginative, but they evoke haunting emotions and reflections on the relationships between humans and other animals in urban environments. Shaun Tan‘s surreal illustrations add to the power.

A powerful collection of autobiographical essays about abuse within lesbian intimate relationships. Each one references pop culture—film, tv, literary tropes—in an engaging way. This book brought me back three decades to the shame and bewilderment when I was also abused by a woman I loved. I recognize the truth in her statement: “Fear makes liars of us all.”

This, maybe, was the worst part: the whole world was out to kill you both. Your bodies have always been abject. You were dropped from the boat of the world, climbed onto a piece of driftwood together, and after a perfunctory period of pleasure and safety, she tried to drown you. And so you aren‘t just mad, or heartbroken: you grieve from the betrayal.

Little Weirds by Jenny Slate
Audiobook narrated by the author

Fresh, brief and whimsical personal essays about how to live with gusto and feel safe and discover doors in your heart and appreciate beauty and connect with nature. Jenny Slate writes memos to herself, believes “wildness belongs in people,” her spirit has “an exquisite lacy patterned strength,” and cringes when she sees the tv “loitering like a dumbass.” Loved this audiobook so much I listened to it twice.

I‘d rather live with a tender heart because that is the key to feeling the beat of all the other hearts.
------
I am a geranium that is holy and wild, but I want to sleep in a neat little pot.
------
Before we all got here, there was a garden and the garden was good. I know that this is also the beginning of the bible. The bible is not the only book that is authorized to talk about good gardens. There are magazines about good gardens, there are tv shows; this is just another garden story.
------
Everything is always remaking itself and so are you. Everything is art and nature, and so are you. 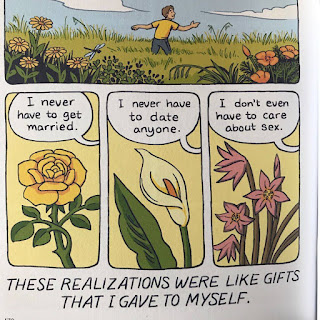 California comics artist Maia Kobabe‘s memoir documents eir journey of feeling nongirly from childhood to realization that e is nonbinary and asexual. E also writes about switching to e/em/eir pronouns; hearing them for the first time gave em the “biggest tingle” down eir spine. (The Spivak pronouns are unusual and I‘m pleased to meet someone who uses them.) Sweet and honest with full colour art.


Duran Duran, Imelda Marcos and Me by Lorina Mapa

A poignant memoir in graphic novel format by comics artist Lorina Mapa, who was a teenager in 1986 during the People Power Revolution in the Philippines. I was moved to tears by her portrayal of the events, the millions who gathered, kneeling and praying in front of tanks, to put an end to the Marcos dictatorship. Moving back and forth between her childhood and her adult married life with four kids in Canada, this story is also about rediscovering oneself.

“Tiger, Tiger” is a little-known instrumental by Duran Duran. […] I once played that song 27 times in a row at full volume, lying on my bed, my head in that timeless space … no beginning, no end, no Rina. Just the music and the feeling that I was everything and I was also nothing. Really … who needs drugs?

My print reading was curtailed in the month of January as I healed from a concussion. I listened to all kinds of audiobooks instead: nonfiction, historical, cozy mysteries, a thriller, and quite a bit of fantasy. I didn‘t realize how much I had been missing character-based literary fiction until I felt myself sink into Lily King‘s prose. I loved this quiet, tender novel about an emotionally shuttered teacher and her complicated relationship with a text she taught every year: Tess of the D‘Ubervilles.

To live even a day on this earth required courage. All these things they read in school—The Odyssey, Beowulf, Huckleberry Finn—all about courage, but the teacher never said, ‘You may not have to kill a Cyclops or a dragon, but you will need just as much courage to get through each day.‘ 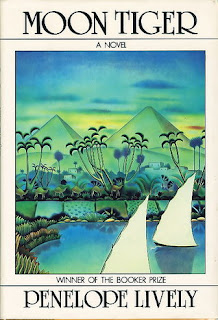 There are good reasons why this haunting novel won the Booker and then was selected Best of the Decade as part of the 50th anniversary of the Man Booker Prize. Those reasons include memorable characters and stylish prose about memory and loss. I am so glad I finally read it!

History is disorder, I wanted to scream at them—death and muddle and waste. And here you sit cashing in on it and making patterns in the sand.
------
Is nausea always a manifestation of grief? Who am I to know? I have never been thus before. Grief-stricken. Stricken is right; it is as though you had been felled. Knocked to the ground; pitched out of life and into something else.
------
Laszlo has always allowed his soul to hang out like his shirt-tails and Gordon found this uncongenial. He did not object to people having souls but preferred them tucked away out of sight where they ought to be. 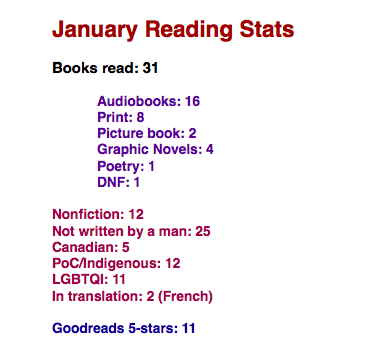