Dominoes at the Crossroads by Kaie Kellough 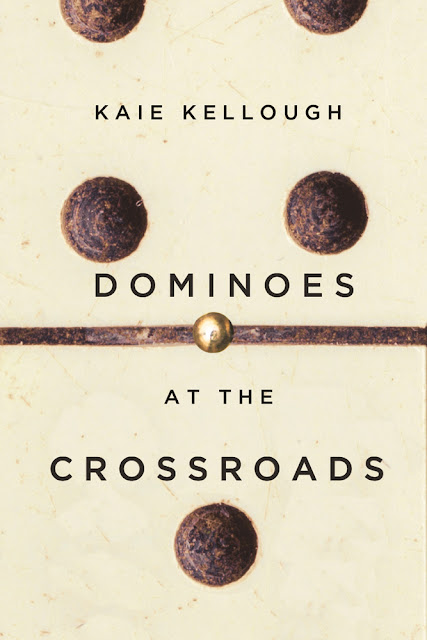 Dominoes at the Crossroads: Stories by Kaie Kellough
Esplanade, January 2020
Pieces of short fiction about Canadian identity as part of the African diaspora -- short stories, autobiographical fiction, science fiction, spy thriller, memoir, metafiction, history, historical fiction: whatever form this hybrid collection uses, by the end it has transformed into a novel. It's safe to call it outstanding.
Writing is read in present time, but it can easily move among different times, from the past through the future. It can disappear into alternate timelines. For that reason, the form of writing that resonates with me most is memoir, a subgenre of fiction. A memoir can begin at any point. It can become a search for origins, or an excavation of memory. It can play double Dutch with time and memory, can illustrate how the past sometimes follows the future, and the present sometimes freezes in its advance.
Told in first person, drawing on Kellough's family history and others', deftly slipping in and out of personas and time periods, occasionally into French (or the French pronunciation of Haiti), the prose has the assurance of a poet's grace.
Somewhere in this story is a break, a portal, a black hole. It may only be the size of a small pothole on Cremazie Boulevard, or the size of a period between sentences, a semicolon, a semicolony, a sixteenth note's round head, or an island that looks like ink spilled onto the blue map. In 1972 a young woman fell through such an inkspill, one called Ayiti, and a young man reached for her hand and was pulled in after her. They were my grandparents.
In several of the stories, the author is himself a character.
A writer like Kaie has to write through race, an expression that I like because it seems to offer hope or an eventual emergence. but I don't think anyone ever emerges from race, certainly not a Black man.
Racism, whether overt or in micro-aggressions, is never the point of these stories, but this is reality and it seems unavoidable.
Standing on the street corner, waiting for the light to change, a person feels the sharp edge of the wind, and a car slows as it rounds the corner and someone sticks their face out the rear window and spits, Negre.
Music is a common thread tying these stories together, whether the characters are busking, or have touring gigs in venues across Canada and Europe, or are listening to the radio in cars stuck in Montreal traffic.
The syncopation struck out geometric patterns in my mind. Y a pas deux calculs. Y a pas deux mesures. The drumbeat suddenly became very focused and unforgiving. It shot forward. Two guitars and the bass dropped out. The drums continued, four on the floor, insisting, with the hi-hat ticking stardust around each beat, making each beat shine and glimmer. The voice rose like smoke off the rhythm, like heat off the asphalt, or like an airplane off the runway. Ou on aime ou on n'aime pas. Ou on aime chaud ou on aime froid. Police sirens raised themselves out of the darkness and flashed off the windows of buildings. The horn section pushed its melody through brazen air. The traffic stopped. The students ran.
It's a slim book, only 208 pages, but it contains a world of lives. Its forward movement embraced and carried me like an ocean current.
I am populated by other people's lives. In my mind the lives blur into a vast anonymous sweep of existence, a movement. The idea that stories are about individuals, that they have protagonists and antagonists is a simplification that fuels the market. There exist no central figures. A person is nobody. No narrator, no voice. A story is a natural force, like the hurricane, that flings individual names apart.
I want to swim back and start again from the beginning.

Giller chances: HIGH - Kaie Kellough was awarded the Griffin, Canada’s most prestigious poetry prize, earlier this year for his Magnetic Equator. Dominoes at the Crossroads has the potential to receive the Scotiabank Giller Prize. Has that double-whammy ever happened before?