Tim Hortons again... popping up in the books I read... 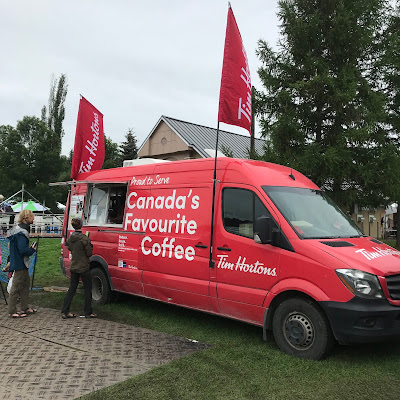 I am tickled every time I come across a Tim Hortons reference in the books I read. So Canadian! Previous excerpts can be found here: Tim Hortons tag

"I scowled. We were almost at the main road, Lawrence Avenue, a busy street for traffic but a lonely one for walking -- all of civilization was at the strip mall with the Tim Hortons and the big-box Walmart, or else inside the grey apartment buildings that stood, washed-out and faded, beside the sidewalk."

I was standing in line at the Tim Hortons on campus when I saw Jonas. He was ordering, leaning forward over the counter and whispering his order to the cashier. She blushed, covered her mouth with her free hand. Her hat was red. If Patty were here, she would have said, "Women dressed in red are more sexually attractive to men."

He holds up a paper bag.
"What's this?"
"Milestones," he says. "Want one?" He shakes the bag of doughnut holes.
"I don't know. Is your own little poison stone crouched in there somewhere?"
"Don't make fun of my mental illness," he says bluntly. "And I'm not telling you if it's in there. You'll never know unless you reach inside."
I take the bait, pull out a Milestone, take a bite. Dark chocolate with pomegranate jelly.
"Yum. So you work at West Edmonton Mall now?"
"Ugh I know, rub it in. I hate this place."
[...]
"If you promise to stick around and chat until my shift is done I'll make you The Great One for free."
"What's The Great One?"
"It's our legendary, off-the-menu Miles Hortons drink. It's like a double-double but it's nine creams-nine sugars. Get it? After Wayne Gretzky. Number 99."
"That sounds horrifying. I think I'll pass."
"Your loss. I drink one every day."

But the road also made her long even harder for Victor. Over the years, road trips were an excuse for them to be neither here nor there, free from their daily lives. Fucking in the back seat behind a Tim Hortons; tipping lamps off desks in motels that still had smoking rooms; enjoying the smell of themselves on each other's hands and faces while ordering breakfast at four o'clock in the afternoon at Denny's.

-from Empire of Wild by Cherie Dimaline, p 89

The Labrador Sea appeared in early 2015. It was at first only a modest success. There was an approving review in the New York Times Book Review, something more equivocal in the Telegraph. The Labrador Sea was overlooked by the London Review of Books. In Merrett Leys's home country, the National Post profiled the author as a "global literary phenomenon," emphasizing his "nearly-million-dollar advance." Merrett Leys told the interviewer, "I consider myself very fortunate that anyone would be interested in this story of longing and sea foam."

The Labrador Sea went on to receive Canada's lucrative Tim Hortons Prize. More surprisingly, it was named as a finalist for the US National Book Award and for the Man Booker. It won the latter, to widespread astonishment -- bookies put Merrett Leys's odds at 100-1. This recognition opened the floodgates.

Without being asked, Al-Karim takes orders for tea. "Tim Hortons! Shabash. Would have brought a thermos of chai from home if we'd known," a senior says, shaking her head. All the seniors request double doubles.

-from Night of Power by Anar Ali, Chapter 14

After Donald Trump was elected president in 2016, writing felt pointless, let alone writing arts criticism. Finally, at a Tim Hortons during a christmas visit to Canada, I managed to hammer out the section of this essay about Trump as a stand-up comic. The one section that I wish I could expand is the relationship between TV news and TV comedy.

-from 'How Jokes Won the Election' in I Like to Watch: Arguing My Way Through the TV Revolution by Emily Nussbaum

...And this one is thanks to my Litsy friend Memory Scarlett:

It took us about fifteen minutes to get to the Tim Hortons on Bloor where Colin was hiding out. Parking was nonexistent -- no surprise there -- so Hudson pulled over and put on his four-ways.

To top it off, there was a bit of a twitter storm in October 2019 when a Hong Kong student shared his perspective on the place Tim Hortons holds in Canadian culture: 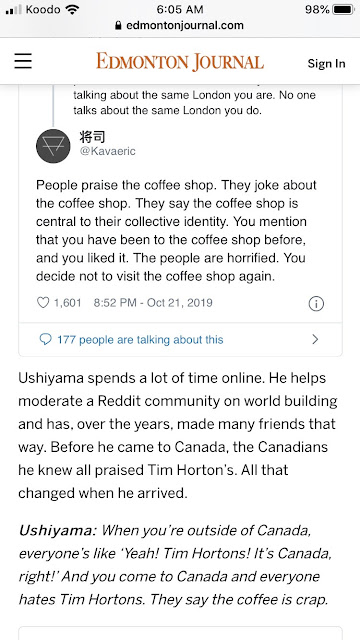 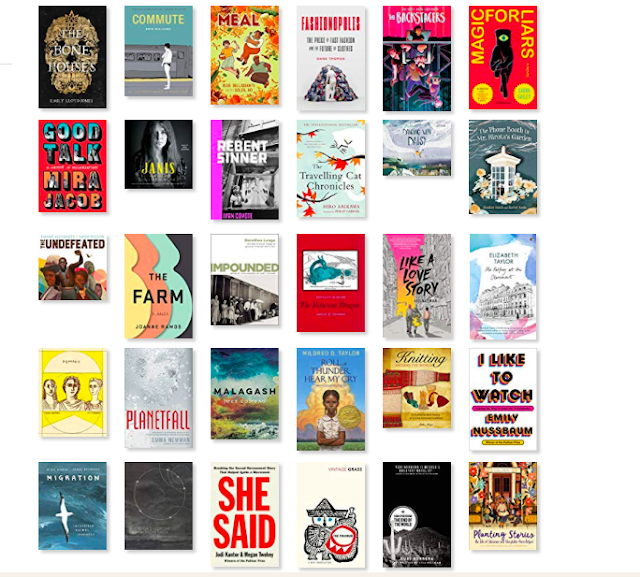 Here are some of my favourites reads from February:

This memoir hits all the right notes: heartbreaking and funny and absurd… it‘s contemporary life as seen through the eyes of Mira Jacob, daughter of Indian immigrants to the USA. Jacob married a white Jewish man. In the volatile time surrounding Donald Trump‘s election, their 6-year-old son has many questions about race and colour. Jacob answers him with care and honesty. The paper doll art and speech balloons collaged against photo backgrounds is unique and really effective.

Conversation between the author and her son:
Was Michael Jackson brown or was he white?Well, he was black but his skin was brown and then it turned white.Are you going to turn white?No.Am I going to—No.Daddy?Daddy‘s already white?But was he always?

This memoir in comics format is a must read for anyone interested in gender dynamics and feminism. Erin Williams, an illustrator and cancer researcher, writes about recovery from alcoholism and how her addiction was tied to her sexual experiences. Simple line drawings with effective use of black and spot colour add grace and power to this honest, uncomfortable, and deeply moving work.

The shame of previous digressions will poison you if you let it.

Men are able to dismiss the deficiencies of other scholarly men as products of their time rather than recognizing them as bigots who helped to perpetuate centuries of oppression.

A brilliant allegory encompassing contemporary latinx experience on both sides of the border between Mexico and the US—or life and the afterworld—told simply, yet with such inventiveness (“he angloed” rather than “said in English”) that I felt frequent thrills deep within my language-loving core. My heart was with the badass heroine and her archetypal quest, echoing with ancient mythology.

The stadium loomed before them. So, what do they use that for?They play, said the old man. Every week the anglos play a game to celebrate who they are.
-----

The city was an edgy arrangement of cement particles and yellow paint. Signs prohibiting things thronged the streets, leading citizens to see themselves as ever protected, safe, friendly, innocent, proud, and intermittently bewildered, blithe and buoyant; salt of the earth worth knowing.
-----
First there was nothing. Then she made out two mountains colliding in the back of beyond: like they‘d come from who knows where and were headed to anyone‘s guess but had come together at that intense point in the nothingness and insisted on crashing noisily against each other, though the oblivious might think they simply stood there in silence.

An excellent collection of mostly short pieces from one of my favourite storytellers. Ivan writes with warmth, humour—and sometimes sadness—about life and being human. Since they happen to be trans, Ivan also writes about that.

Semi-drunk and definitely creepy dude in the lineup at the market says to uninterested young mother: “Is that a new baby?”Young mom retorts coolly: “Is there such a thing as an old baby?”Even the clerk laughed.
-----
Sometimes there you are on the highway, and you drive right through a flock of memories, like ghosts. All you can do is keep your eyes on the road.
-----
A friend told me today, “Don‘t catch a falling cactus.” I did this only once, but still, it needs remembering.

A teenage girl plans to use her mad programming skills to keep her dying father alive forever in the form of a benign computer virus. This warm and funny novella-length audiobook avoids sentimentality while portraying a Nova Scotia family coming to terms with their grief.

Mrs Palfrey at the Claremont by Elizabeth Taylor
-British novel

This quiet, compassionate, sharply-observed novel about loneliness and aging has completely stolen my heart.

Cleft chin, widow‘s peak, Hapsburg lip and five o‘clock shadow. By simply rearranging these words he could later make a poem out of them, he decided. He knew nothing about poetry, apart from assistant-stage-managing The Cocktail Party when he was in the repertory company.
-----
Mrs Post paused on her way out. She was wearing, in spite of the warm afternoon, her mock (and as far as Mrs Arbuthnot was concerned, her mocked at) fur coat of grey shaded stripes. If I were going to copy any kind of fur, Mrs Arbuthnot thought, consoling herself, it would not be squirrel.

I‘m so glad I decided to revisit 9-year-old Cassie Logan before my library hold comes in for Mildred Taylor‘s 2020 conclusion to her multivolume saga about the Logan family (All the Days Past, All the Days to Come). The audiobook of the 1977 Newberry award-winner is expertly narrated by Lynne Thigpen, has a preface written and read by Jacqueline Woodson, plus an afterword in the author‘s voice. The whole thing is a powerfully moving experience, recommended for family listening.

The cover of the 40th anniversary edition (pictured) is by Kadir Nelson, the illustrator who also did The Undefeated, the next book on this month's list.

You have to demand respect in this world, ain't nobody just gonna hand it to you. How you carry yourself, what you stand for--that's how you gain respect. But, little one, ain't nobody's respect worth more than your own.

Kadir Nelson‘s striking paintings accompany a poem that Kwame Alexander wrote to remind everyone that Black Lives Matter, and also about aspects of American history that have been left out of textbooks. Brief biographies at the back help identify historical figures in the illustrations. Further research will reward readers who seek the sources for the snippets of poetry and literary references in the text. An award-winning all ages picture book.

A Japanese man built a “phone of the wind” in his garden as a way to deal with grief. After a tsunami struck his coastal town of Otsuchi, thousands of mourners flocked to the phone booth, longing to connect to their missing loved ones. Canadian author Heather Smith was inspired by this and created a fictional version for children, hoping readers “will see that sometimes in sadness there is beauty.” The resulting picture book works on several levels: pure storytelling; lovely art; the true story that inspired it; and as an illustration of the grief process. There‘s reassurance that grief lessens over time and that there are things you can do that can help you feel better. Rachel Wada‘s art evokes Japanese techniques, perfect for the setting. All ages.

More about the actual phone booth can be found online, including here: https://www.citylab.com/life/2017/01/otsuchi-wind-phone-japanese-mourners/512681/ 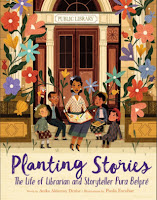 A picture book biography of the first Puerto Rican librarian in New York City: Pura Belpré. At library storytimes and outreach visits, she shared the folktales she had learned through her family‘s oral tradition. These stories weren‘t in books, so she wrote them down and they were published. Art by Paola Escobar captures the feel of the early 20th century by using muted shades of deep colours. Flowers burst forth to symbolize magical elements of story.

Fashionopolis: The Price of Fast Fashion and the Future of Clothes by Dana Thomas
-audiobook [9 h] narrated by the author

Dana Thomas is a creditable and engaging guide as she reveals the extent of worker abuse, environmental degradation and waste of resources happening in the clothing industry, an industry that employs one out of every six people on the planet. Hope is presented in the form of many solutions currently underway. We all wear clothes and socially conscious consumers can make a difference; this audiobook is a great way to get informed.

At any given moment, anthropologists believe, half the world‘s population is sporting jeans. Six billion pairs are produced annually. The average American owns seven. 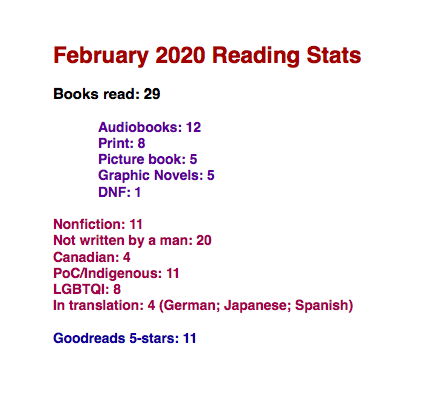