I decided to read as many Giller-eligible titles as I could in August and I'm pleased with how that turned out: 11 out of the 30 books that I finished this month fall into that category. As far as predictions go, however, I am throwing my hands in the air. I recognize that many of the books this year that are stand-outs for me are not every reader's cup of tea. So, instead of trying to predict what the judges will choose for the Giller longlist next week, I will soon put together my personal favourites. Watch for it!

These next two are on the Booker longlist:

The Colony by Audrey Magee, audiobook read by Stephen Hogan

The Trees by Percival Everett

I only read three nonfiction books in August. This is the one I've been telling everyone about:

The Joy of Sweat: The Strange Science of Perspiration by Sarah Everts, audiobook read by Sophie Amoss

Kae Tempest's long poem is a reread and also a re-listen (I did both):

I checked a digital edition of this graphic novel out from the library and read it three times:

A Gift for a Ghost by Borja Gonzalez, translation by Lee Douglas

And lastly, a wonderful Indigenous picture book about a two-spirit child: 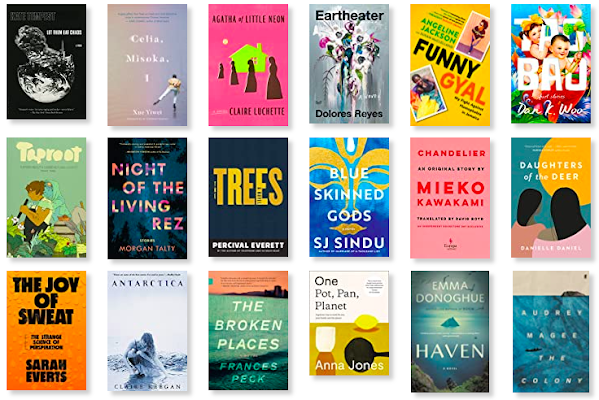 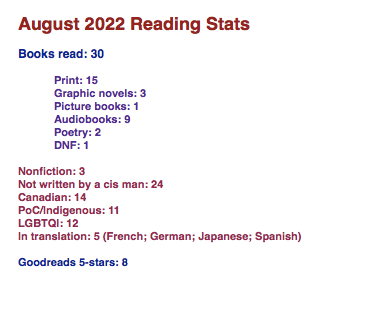 It's been a while since my last post about trepanations encountered in my reading. (You can find it here.) Do you need these like a hole in the head? Perhaps, but here they are, anyway.

The Animals in the Country by Laura Jean McKay

"You're registered, all official. Here's a couple of armbands. Not compulsory, just a handy reminder that you've been diagnosed correctly. Okay? Next, thanks."
"Wait up. I'm sick. I need medical support."

"The doctors are busy with the psychotic," the nurse says quietly. "Those who are displaying psychotic tendencies, in danger of trepanning, talking to insects et cetera." We glance down the line to where the little girl is pawing at the ground. "Are you talking to insects?" The nurse is up in my face now, filling the world.
--------------------
One of the people outside runs her mouth along the windshield of the flat front of the van, leaving a trail. The dust we've collected on all the roads browns her teeth like she's been chowing down on chocolate cake. She wanders off. Ange is always telling Kimberly not to stare at different people, but I'm staring.
"What's wrong with her?"
The man makes a rat-a-tat motion on his noggin. "Bless them. Our do-it-yourselfers can get excited, turn nasty."
"Do-it-yourself what?"
"Do-it-yourself trepanning. Hand drill to the skull, relieve the pressure caused by the flu. Stops all the critters talking to you. You must have seen the video. I can do it for you, if you want."

The Golden Compass: The Graphic Novel by Philip Pullman, adapted by Stephane Melchoir and Clement Oubrerie, translated by Annie Eaton 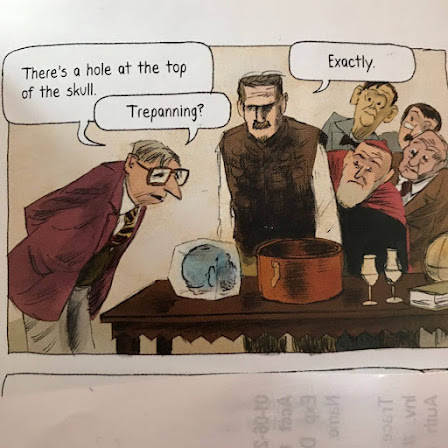 Grandma is trying to find someone who will drill a hole in her head because she's heard that's the most effective way of getting rid of trigeminal neuralgia, which is nicknamed the suicide disease because it's the most painful physical experience a human being can have and you just want to kill yourself. But nobody wants to drill a hole into Grandma's head because of her age. They stop drilling holes into people at around age sixty. Remember that, Swiv! Grandma said.

But there is a disease in the grain, or perhaps it is cursed by the devil, and after eating it, some dance uncontrollably and sing naked in the streets. Others scream with terrified visions. Others go stiff and barely breathe.
Nothing can drive out the disease. Not praying, not bathing them in holy water, not tying them to their beds, not leaping out from the night to frighten them, not holding them by the ankle in the cold river, not beating them around the head with a yew branch, not burying them crown to toe in warm manure, not hanging them upside down from a high tree and spinning them until they vomit, not drilling a tiny hole through their skulls to let the bad humours out of the brains.

The Air Year by Caroline Bird

It's like being a windmill in a vacuum
packed village. Weekends are the worst.
The taste of nothing is like licking dew off plastic.
Floppy soul, they call it. Slack spirit. Neurological
pins and needles. Someone has drilled a hole in the crown
of my head, inserted a funnel, emptied
molten margarine into my plumbing. [...]
-from the poem 'The Deadness'

Cormac's fingers go up to the little crater above his left ear. "A slingstone stove my head in."
"In battle?"
That seems too grand a word for it. "Well, we were disputing with another clan. The blow sent me out of my senses.
But my brother's wife had heard the Christians had strong medicine" -- he almost said magic -- "so my people brought me to Cluain Mhic Nois. A monk called Fiach, he saved me."
"How?" Artt asks.
"Cut the scalp and peeled me like an apple. With a hand drill he bored holes until the smashed piece came right off. Then he sewed the skin back over the hole, and poulticed me with herbs, and prayed till my fever broke."
"You were quite well again?"
"Better than before, in fact, Deo gratias." Cormac makes a cross on his forehead. "Wits a bit sharper and memory roomier."

He leaned over and kissed her neck. She swung around, hair delicately brushing his face, kissed him full on the lips, and returned her attention to the front of the hall. Beck stared at the back of her head, wishing he could burrow through her soft brown hair, trepan her skull and examine her thoughts.