I've got a fistful of tickets for the Vancouver Writers Fest and I'm getting on an airplane today, headed for my annual week on Granville Island. Yay! These are the authors I'll be seeing at 16 different events: 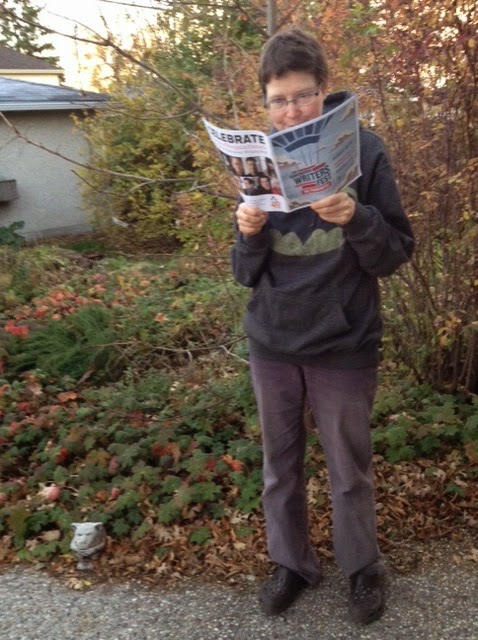 Plus, an illustrious line-up of 15 poets at the Al Purdy Show, including George Bowering, Daphne Marlatt, Sharon Thesen, and Fred Wah.

There's a particularly strong showing from queer authors at the festival: I count at least eleven. The whole thing will be fabulous and I feel so lucky!

Blog postings may not be happening this week, so I invite you to follow me on twitter: @ReadingLindy

I'm a sucker for a strong sense of place, and the Newfoundland coastal island Sweetland is practically a character in Michael Crummey's novel of the same name. Then there's the human central character, Moses Sweetland, so vividly real.

Crummey's language is poetic and spare. Evocative Newfoundland terms like droke, skreel, pook, duckish and tuckamore are sprinkled throughout. (There's a dictionary online here.) I adored Sweetland from the very first page, where Moses is stranded by fog:

"Slept in the wheelhouse under an old blanket with a pair of coveralls rolled up as a pillow. The mauze lifted a little at first light and he thought he might be able to pick his way home. Had the island in sight when the mist muffled in, so thick he couldn't see ten feet past the bow."

The government wants to halt all services to the island of Sweetland, so they've offered a generous resettlement fee to each of the few remaining residents. The catch is that everyone must agree. Moses is the only holdout.

Sweetland is a beautifully poignant novel about important things like our connections to one another  and to home.

Crummey is the author of many other fine works as well, including one of my favourite poetry collections, Under the Keel, and the novel Galore. Sweetland is a strong contender on the current shortlist for the Governor General's Award.

The dark, surprising stories in Kathy Page's Paradise and Elsewhere interweaves reality and myth. Celtic, Greek and biblical threads flicker in and out. Amy Bloom calls this book "moody, shape-shifting, provocative" and I can't think of better words. I was entranced.

There's a universality about the settings. The places are all over the planet, ranging from the seaside to a desert oasis, and from a stony mountain valley to a tropical locale. Each tale is quite short. They address isms - like consumerism, tourism, sexism and colonialism - from new vantage points.

The following is an excerpt from 'My Beautiful Wife'

"What use is a car, Liia says. Books are more important. A car can only take you half as far as the fuel you can pay for lasts, and then you have to come back; but books are infinite journeys and each one can be taken many times."

Paradise and Elsewhere is a journey into the truths of existence.

A Game for Swallows by Zeina Abirached

One eventful day in the life of two small children during the civil war in Lebanon is told in the graphic novel memoir A Game for Swallows: To Die, to Leave, to Return. Author and artist Zeina Abirached was born in 1981. Beirut was a city of barricades and snipers. Her family had pretty much moved into the one part of their apartment that was safest: the foyer.

The story begins with a map and then a wordless series of outdoor images that set the scene. Stacks of concrete blocks and ranks of empty oil barrels are set up to protect buildings and pedestrians. Everything is marked by bullet holes. Metal shutters are drawn over the shops, including those with small signs proclaiming they are open. The image of a piano advertising a shuttered music store is a poignant reminder of the toll war takes on cultural life.

Abirached's monochrome stylized art is composed of tight lines, elegant and precise. Expanses of plain white or black contrast areas of intensely detailed patterns. The effect is striking. And so is the tale.

Zeina's parents have left her and her little brother alone when they go to her grandmother's house a few streets away, then heavy bombardment prevents their return.

The small foyer is the most secure room in the entire building, and gradually the neighbours are all gathered there with the children, waiting. The boredom, the restlessness, the fear, and the resignation experienced by trapped individuals -- Abirached's art portrays these emotions very well. The neighbour with a handlebar moustache pulls on it repeatedly. Panel by panel, cigarette smoke gradually envelops a smoker. Worry is expressed in sideways glances, small sighs.
We get to know the individuals and what comes through most strongly is a sense of community support. Zeina and her brother are in good hands, beloved. This is a remarkable book, suitable for readers from age 10 to adult.

Readalikes: Persepolis (Marjane Satrapi); Sami and the Time of the Troubles (Florence Parry Heide). For a much darker look at the war in Lebanon, there's Waltz with Bashir (Ari Folman & David Polonsky).
Posted by Lindy at 7:49 AM No comments:

I Am Malala by Malala Yousafzai

I am delighted to see the announcement today that Malala Yousafzai and Kailash Satyarthi were awarded the Nobel Peace Prize for their activism on behalf of children.

My book group read Yousafzai's memoir I Am Malala last month and every one of us found it moving. As a teenager, Yousafzai started speaking up about girls and their right to receive education in Pakistan. When she was 16, she was shot in the head as a direct result of her activism. She survived and has continued to campaign for educational rights.

I Am Malala is an inspirational memoir that offers a window into the lives of real girls and women in Pakistan.
Posted by Lindy at 7:21 AM No comments:

South African writer Damon Galgut takes readers on a journey into E.M. Forster's interior life in the novel Arctic Summer. It covers the dozen or so years that Forster spent writing (and mentally stuck, not writing) A Passage to India.

During that time, Forster travelled extensively, but movement did not dispel his inner inertia. Repressing his desire for the love and companionship of other men forced him to control all emotions equally. Returning home, Forster felt at odds with his own life, as one does after spending extended time away. There is a sense of waiting, slowly building towards readiness to move forward; it requires patience on the part of the reader.

It's not for someone looking for a propulsive plot. The pace is stately -- I want to say 'glacial' because of the title, but that would sound pejorative. I admire Galgut's eloquent, introspective style. Arctic Summer makes a close examination of the complicated contradictions that form a unique individual.

"Was he a conscientious objector? The description didn't fit comfortably. The principle of abstaining didn't ennoble him, any more than bloodshed would. Both sides had their idealism, which he heard everywhere he went, till he felt that he might choke. What was most distressing was the ability to understand both viewpoints while being able to follow neither."

Homosexuality was discussed in couched terms in the early twentieth century. Forster refers to 'minorites' and 'homogenic love.' He calls Maurice "my Uranian romance:"

"The feeling of release was huge. An enormous pressure had built up behind the words, years and years of silence, which now pushed into the open. Few things are more powerful than confession, and he told it all to the page. The uncertainty, the doubt, the slowly dawning realisation: he could let it spill."

"Of course, he could never publish it."


Maurice is the only one of E.M. Forster's novels that I have read so far. (My blog comments are here.)

The following passages from Arctic Summer have given me wonderful insights into the mental work that a writer does:

"Though he couldn't let go of himself enough to worship, he had never lost a sense of an ultimate cause, a Thing at the back of things, which propelled events without actually shaping them. Whatever the ruptures and ructions of human life, he felt, the universe operated according to some vast, unfolding principle, and to abandon oneself to its rhythms wasn't a senseless undertaking.

It came to him now that his book might express something of this unity through its structure. It was always a useful moment when a story revealed its deeper nature to him -- told him, as it were, why he was writing it -- and he experienced such a realisation now. He had a sense of a gathering shape, of an underlying architecture to his narrative."

"So his characters, he felt, weren't likeable. No, they had been forged in angry gloom, scored and scratched by their maker."

The title, A Passage to India, comes from a line in Walt Whitman's Leaves of Grass, adding another layer of queer context to Forster's writing.

"Everybody had finally given up on expecting anything new, and then he had slipped it out. He had written a great book, apparently, a masterpiece: the best of his career. And the timing, with the questions of Indian independence so much in the air, couldn't have been better."

Damon Galgut has inspired me to read A Passage to India and I feel quite excited about that! I also look forward to hearing Galgut at the Vancouver Writers Fest later this month.
Posted by Lindy at 11:18 AM No comments:

17-year-old Adam gets mistaken for a trans guy when he spends a summer with his lesbian sister Casey in New York City. Adam is Ariel Schrag's first novel, a romantic comedy of errors.

In her earlier works -- Awkward; Definition; Potential; and Likewise -- Schrag chronicles her high school years in comics. The autobiographical series is about her queer coming of age. In Adam, we are fully immersed in 21st-century twenty-something queer community, from political activism to play parties.

Schrag's transparent prose style keeps the focus on plot, believable dialogue and strong characterization. I flagged a passage in which many book addicts will see themselves:

"'Uh-huh?' said Casey, still not looking up. Adam knew she wasn't listening. It was a surprise Casey heard June at all. When Casey was reading, nothing got through to her. She became dead to everything outside the book. It was an attribute their mom liked to brag about all the time."

Adam is a rewarding romp, wrapped around poignant issues like unrequited love, manipulation and self-construction. So much fun!

Readalikes: (you) set me on fire (Mariko Tamaki); 48 Shades of Brown (Nick Earls); and The Floundering Time (Katy Weselcouch).
Posted by Lindy at 7:06 AM No comments: