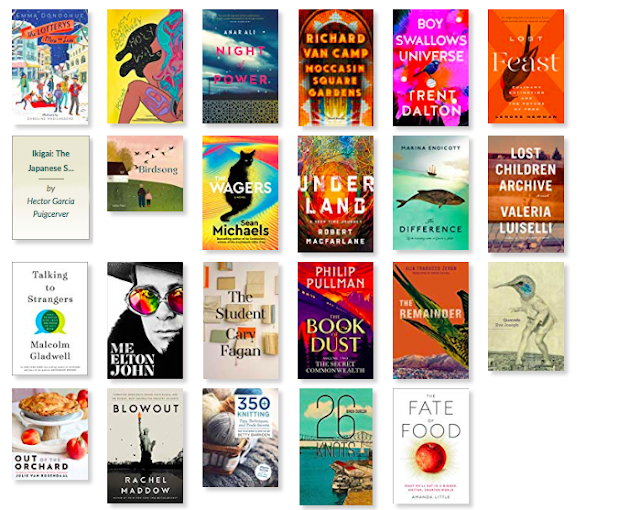 Eleven of my favourite reads from the eleventh month of 2019. It is totally by accident that the titles all consist of one, two or three words (not counting the subtitles on Underland and Blowout).

do not perform your body,
be a holy place only the blessed can enter.
_____

what sleeps in language is what sleeps in me,possibilities and consequences for which the surface has no hope,an unwritten alphabet of shadows I learn in secret, undercover from a hormonal moon in a dark tongue.
_____

remember youare not wrong neither are your lovers who love you— confused and changing like you love the earth under the weight of spring as summer breaks open as everything is blessed by its sudden wonder forgive us our sins daughter of yourself as we forgive you the miracle of your being.

This collection of brief prose poems had me feeling a bit puzzled and off-balanced at first. Then, as if a switch was flipped, something clicked in my brain. Our world is a place of wonder. Humanity's imagination is our strength. I have been obsessed with these whimsical gems ever since. Winner of the 2019 Canadian Griffin Poetry Prize.

On the couch, Al Purdy was going on about the stunted trees in the Arctic. Upon closer examination, we could see that the leaves were tiny parkas. The illogical must have a logic of its own you said.
____

The poet keeps a jar of commas on his desk. They look like the sheared ears of voles and are soft as apricots. Late at night, blindfolded, he loves to take them out and play pin-the-tail on the donkey while his wife and children are fast asleep. He plays his sentences like fish in a stream, tickling for trout with curled fingers.
____

Prometheus is at it again. […] In his room, he‘s building something out of matchsticks for the science fair. The little charred heads like so many executioners.

A child named Katherena (in homage to Metis writer Katherena Vermette, perhaps?) learns to cope with change. The intergenerational friendship, the passage of seasons, a few words in Cree language, the sweet digital collage illustrations created from pastel drawings… this gentle Indigenous picture book is so very lovely. I am always happy when Flett has a new book out.

I was spellbound by this journey into what lies in the dark: in caves, mines, underground water and petroleum resources, hollow spaces quarried out under cities and made into catacombs, the depths of glaciers. Macfarlane goes to dangerous places that I only want to experience vicariously and he writes about it all so exquisitely. “A charm of goldfinches flitters away, the birds‘ high song glittering around us.” Nature writing at its finest.

The Anthropocene compels us to think forwards in deep time, and to weigh what we will leave behind, as the landscapes we are making now will sink into strata, becoming underlands. What is the history of things to come? What will be our future fossils? […] The Anthropocene asks of us the question memorably posed by the immunologist Jonas Salk: ‘Are we being good ancestors?‘

Everywhere are the emerald leaves of the tiny dwarf willow. We have pitched our tent on top of a forest, I realize. We are canopy dwellers.

The Knud Rasmussen glacier is a body of ice so great that it makes its own weather. The glacier is invisible the afternoon we arrive, concealed by a bank of fog that runs the full span of the fjord, a mile or so wide but only a few hundred yards high. Above the fog is blue sky, below it is blue water, and behind it is blue ice.

In Oregon […] there exists a honey fungus, Armillaria solidipes, that is two and a half miles in extent at its widest point and covers a total lateral area of four square miles. The blue whale is to this honey fungus as an ant is to us. The best guess that the US Forest Service scientists have been able to offer for the honey fungus‘s age is between 1,900 and 8,650 years old.

Fungi and lichen annihilate our categories of gender. They reshape our ideas of community and cooperation. They screw up our hereditary model of evolutionary descent. They utterly liquidate our notions of time. Lichens can crumble rocks into dust with terrifying acids. Fungi can exude massively powerful enzymes outside their bodies that dissolve soil. They‘re the biggest organisms in the world and among the oldest. They‘re world-makers and world-breakers. (Macfarlane is quoting mycologist Mervin Sheldrake in this passage.)

Blowout: Corrupted Democracy, Rogue State Russia, and the Richest, Most Destructive Industry on Earth by Rachel Maddow
[audiobook read by the author]

The United States was beginning to look like it might be capable of overtaking Russia, become the world leader in oil production. All glory to the frackers… and all apologies to the cows… and the neighbors… and the future prospects for their drinking water.

If you are a 15-year-old boy, your lifetime expectancy is three years longer in Haiti than in Russia.

The Vigor Marine company website boasted “even the blue and white paint scheme was chosen to accommodate the preferences of whales.” This was news on a few fronts, not least that whales have colour preferences.

The Student by Cary Fagan

I love rich, character-based fiction and felt immediately caught up in the inner and outer life of one Toronto woman, Miriam Moscowitz, who is out of step with her contemporaries in 1957 because she wants to go on to graduate school and become a professor. The second part of this quiet novel skips ahead to 2005, allowing a glimpse of the intervening years while showing the fullness of Miriam's life in the 21st century.

She didn‘t mind seeing a Hollywood horse opera if it made Isidore happy. […] He wanted to talk about the film and so she went on about moral ambiguity until he interrupted her by saying, “Why are you trying to spoil the film? Come on, Minnie. Lancaster was the good guy and Douglas was the bad guy. All that studying is going to your head.”“Where else is it supposed to go, my kidneys?”

Twice he had asked her to marry him, or rather talked about being married without quite asking, afraid of what she would say, so she hadn't felt obliged to give him an answer. But one day, she knew, he'd do something atrocious like get down on his knee.

Each year they rented a cottage on the south shore of Lake Simcoe, in the section where Jews could buy property, the drives marked by wooden signs: The Horvaths, The Targovetskys, Camp Kugel. On Friday nights candles could be seen burning in cottage windows.

“…they make a promise to each wear the jeans and then send it to the next person and describe all their adventures while wearing them. I mean, it‘s a pretty stupid idea, like that would ever happen, and the girls are way too nice to each other, which in my opinion is less believable than anything in Harry Potter. But you know what? I can‘t put it down.”“It sounds quite delicious. I wonder what makes us just have to keep reading a book? Does that mean it's good and we don't want to admit it because it doesn't fit our idea of real literature? Or is it like eating candy? You know, all immediate pleasure but no nutrition."

The Wagers by Sean Michaels
[audiobook read by the author]

My audiobook hold came in at the same as the print edition, making it easy to note passages like: “The sun was raying all around.” A thoughtful, dreamy story set in Montreal—a grocery store, a comedy club, a betting track, riding a bicycle through rainy nights—and combining fantastical elements with realistically developed characters. It's also a Robin Hood-type crime caper with action that spans the globe and plumbs the human heart. I especially enjoyed the author's own narration of his book.

To certain observers, Theo might have appeared bored, but he wasn‘t bored, exactly. Boredom requires a degree of self-knowledge. It is not enough that an activity be tedious (i.e. without momentum) or aimless (i.e. without direction): for it to be boring the doer must recognize he is being dulled. Theo was too restless for that.

Sometimes it is easier to trust someone than to doubt them, a kind of gift you give yourself. [This passage happened to echo the subject of the nonfiction book I was reading at the same time, Malcolm Gladwell's Talking to Strangers.]

The Remainder by Alia Trabucco Zeran
translated by Sophie Hughes

Thousands of missing loved ones, “disappeared” by Pinochet‘s security forces, haunt subsequent generations of Chileans. In this dizzying, surreal, gritty, funny and heartbreaking novel, a corpse has gone astray when ash prevents planes from landing in Santiago, prompting the trippiest of road trips. I feel forever changed by my journey through this book.

[…] I went about gorging on nectar as I picked the city flowerless, snatching dismembered petals, petals that I tore from the sepals and the stamens and the corollas and the anthers and the receptacles, which I left floating in the gutters, there among the tadpoles I abandoned those shredded flowers, white canoes in the muddy water for the tadpoles to paddle with, pistils floating with their ugly bug captains, and there I was, winding my way through Santiago […]

[…] and then day broke and I still hadn't gathered my thoughts; they were still lost in the night and everybody knows that the daytime thoughts and the nighttime thoughts never find each other again […]

Her Spanish was correct but old-fashioned, the kind you might still hear in parts of Sweden, Berlin, Canada, but which to me sounded hollow, or perhaps hollowed out.

This fantasy spy thriller is a heady ride across the alternate-Europe landscape of Pullman's imagination, and, in fact, involves the search for Lyra's lost imagination. Lyra is 20 in this second volume of a trilogy and I like seeing the development of her character, even though it's also painful to see that she and her daemon have fallen out. Mainly, their disagreements focus on the way Lyra's outlook has been influenced by philosophies she has encountered in books. Warning: cliffhanger ending.

Lyra bent over the open vessel and found the concentrated fragrance of every rose that had ever bloomed: a sweetness and power so profound that it moved beyond sweetness altogether and out of the other side of its own complexity into a realm of clear and simple purity and beauty. It was the smell of sunlight itself.

A deeply moving novel about family dynamics and the way our lives are affected by larger events happening in society—in this case, the migrant children refugee crisis at the southern US border. The audiobook is a rich experience with four different narrators—including the author—slowly building layers of prose, metafiction, fragments of documents, descriptions of photos. Compassionate and unforgettable.

The conversations between the parents and their kids are a wonderful aspect of this novel. Example:
Child: What's a midwife?
Father: Someone who delivers babies.
Child: Like the postman?
Father: Yes, like the postman.

…I get asked about my accent and place of birth and I say no, I was not born in this country and when I say where I was born, I don‘t even get a nod in return, just a cold dead silence, as if I‘ve confessed to sin.

I asked Slim if he‘d ever read Moby Dick and he said he‘d read it twice because it‘s worth reading a second time, though he said the second time around, he skipped the bit where the writer goes on about all the different species of whales found all across the world.

I asked Slim to tell me the whole story, and for two hours, while we washed his land cruiser, he told me that thrilling adventure tale so enthusiastically I wanted Nantucket fish chowder for lunch and white whale steaks for dinner. 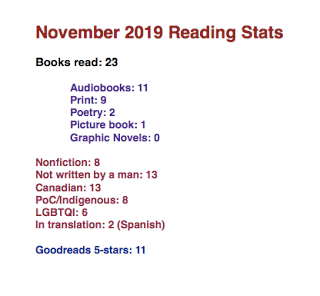