"An iPhone is not a human right,” Victor said mildly. “Privacy is."

Maybe being a bodysnatcher is bad for my joie de vivre.

How to Do Nothing: Resisting the Attention Economy by Jenny Odell
Audiobook read by Rebecca Gibel

I started this in print format and found it hard to follow Odell's long, philosophical sentences. When I switched to audio format, I adored her style. Her work is a call to activism that stresses the importance of taking time to listen, to pay attention, and to contemplate. Also, it's an invitation to reconsider the idea of what it is to be productive. I‘ve listened to the audiobook twice.

As someone who is both Asian and white, I am an anomaly or a nonentity from an essentialist point of view. It‘s not possible for me to be native to anywhere in any obvious sense, […] but the sight of western tanagers, a favourite bird, migrating through Oakland in the spring, gives me an image of how to be from two places at once.

My most-liked Facebook post of all time was an anti-Trump screed. […] It‘s not a form of communication driven by reflection and reason but rather a reaction driven by fear and anger. Obviously these feelings are warranted but their expression on social media feels like firecrackers setting off other firecrackers in a very small room that soon gets filled with smoke.

We the Survivors by Tash Aw
Audiobook read by Jamie Zubairi

Social injustice, class and racial stratification, discriminatory treatment of undocumented migrant labourers in Malaysia: these are the weighty topics of this compelling, humane novel. Told in a circular, conversational style, as a privileged lesbian journalist interviews an ex-convict about his life. How much choice do the underdogs of society have, when all they want is to live a good life? Devastating and insightful. I also really enjoyed hearing Tash Aw at the Vancouver Writers Fest last week.

Sometimes your brain doesn‘t recognise danger or risk until much later — days, weeks, years — and it‘s only then that the event feels scary, because the passing of time has made it seem that you had a choice.

Because Internet: Understanding the New Rules of Language by Gretchen McCulloch
Audiobook read by the author

The passive aggressive potential in a single period… the confusion caused by generational differences in ellipses use… and other aspects of typographical tone are covered in this delightful audiobook about communication. Linguist McCulloch calls language “humanity‘s most spectacular open source project.” Her enthusiasm for her topic is infectious. I also love her sense of humour, like when she talks about putting “our harrumphing hats on.” Informative entertainment.

Semicolon: The Past, Present, and Future of a Misunderstood Mark by Cecelia Watson

A highly entertaining history and current use commentary on a punctuation mark that isn‘t for “highfalutin snobs,” but for anyone who loves language. “If we can learn to see past rules as the only framework with which we can understand and learn to use language, we might be able to see what purposes rules could really serve.” From the badassery of Elizabeth Anscombe, to liquor laws and the death penalty, the semicolon is at the heart of some great stories!

Kurt Vonnegut was unequivocal in his last book, advising writers, “Do not use semicolons. They are transvestite hermaphrodites representing absolutely nothing. All they do is show you‘ve been to college.”

By the early 1800s, parentheses were already so last century, inspiring T O Churchill's 1823 grammar to coolly pronounce that "the parenthesis is now generally exploded as a deformity." It got worse: three years later, the parenthesis had gone from Quasimodo to quasi ghost, [being deemed] “nearly obsolete.” The curved marks that humanist thinker Desiderius Erasmus had romantically called “little moons” (lunulae) had crashed down to earth.

Uncertainty, after all, is very human, and can call forth our best human virtues.

Punctuation has to be judged by how it shapes the text in which it‘s situated. The problem, for writers and readers, is how to go about figuring out whether punctuation is any good or not without the security of a book of rules. It‘s a tough thing to do, to learn to let go of getting answers from stylebooks and to replace that practice with asking exploratory questions about our texts.

Smart, funny and surprising satire entwined with a humane meta storyline. I smirked my way through the audiobook, admiring the quotable quips and amusing list sentences typical of Rushdie. A thoroughly enjoyable modern version of Don Quixote.

I don‘t know when I‘ve walked so far except on the treadmill at the gym.

Another, more colloquial term for going off-label might be… becoming a drug dealer, or even… becoming a narcolord.

Shut Up You're Pretty by Tea Mutonji

Interconnected short stories follow Loli, a Congolese Canadian immigrant, from age 13 to 26, as she blunders through sexual encounters with boys and men, supported and confused by intense female friendships. Raw, surprising and unforgettable.

In Galloway, Mrs Broomfield was legend for witnessing the Rwandan genocide. Her attitude so much positivity and optimism, like, “This is a war, child, it‘s not going to last.” I liked to apply that to everything else: this world is a war, this neighbourhood is a war, this street, this house, this body, this person, this feeling, this war.

Henry had more hair than I expected. On his top lip, a pair of bushy brows, an entire grass field slapped across the bottom half of his face. When he got out of the car and waved, I gave Jolie a look that said, You didn‘t tell me he was a hundred years old. In turn, she gave me a look that said, Stand up straight and stop acting your age.

We once saw a man at the intersection of Galloway and Lawrence with a small teardrop tattoo. It meant he had killed someone, Theresa told me, and lost the love of his life because of it. Detailed, I thought. Didn‘t understand how she could get all of that from a tattoo.

He just talked and talked and talked. I think my father had enough words in him to rewrite Don Quixote. His favourite book. Because he believed in so many of his stories, I never knew which one belonged to either one of us.

The Innocents by Michael Crummey

Ada and Evered* are children, 9 and 11, when their baby sister and parents die of illness. The two manage mostly on their own for several years in an isolated Newfoundland cove in the early 19th century. Cinematic descriptions, lots of archaic vernacular, the seasonal rhythms, and the immersion into both the outer and inner lives of this pair of siblings as they grow into adolescence—all of these made for a bewitching & meditative tale.
*note Biblical reference to Adam and Eve

As far as Ada could tell a mother‘s role was incidental at best, her body a passive vessel for the passing wildflower that was a child. The Virgin Mary had gotten her feet wet out picking berries and so fell pregnant with Jesus. It was a condition women caught like a fever or a cold, something that resulted from their own weakness or impudence. Something vaguely shameful.

Sarah Best was half-asleep with her mouth to the newborn‘s downy crown and she glanced across at Ada without raising her head. “What should we call her?”
It hadn‘t occurred to Ada that a name was bestowed on a person and not something you were born with. The lack made the infant seem almost as naked and pitiable as when she first landed in Mary Oram‘s lap.

“He‘s got all the grace of a cow aboard of a dory,” another said. “The gangly old stilts on him. He‘ll never shit a seaman‘s turd, that one.”

She could talk the bark off a tree, their father said, a note of awed disbelief in his voice.

30-year-old Ruth discovers it‘s possible to make something sweet when life hands her lemons—dumped by her fiancé and then called to spend a year with her parents to help cope with her father‘s Alzheimer‘s. Surprisingly buoyant, this novel is told in Ruth‘s diary vignettes, tenderly collecting moments—absurd, mundane or sublime—like: “The moon is doing something beautiful.” The fragments add up to something charming, heartfelt and beautiful.

At the library, I run into Regina, who was homecoming queen our junior year. She had hay-coloured hair to her waist and I envied it. She has children now. They share names with hurricanes—I don‘t know if it is intentional or what.
“This is Katrina and this is Sandy,” she introduces. The children are 4 and 8, and even so young, their expressions look overcast.

Later, at the farmers‘ market, I watch a couple bros sample dates.
“Shit,” says one bro, coughing, “I think I‘m allergic to this giant raisin!”
“That‘s not a raisin, Steve,” says another bro. “That‘s a Medjool date.”
Born humans, I remind myself.

I like to collect those almonds with the slight curve, the ones that hold your thumb. And not only the curved nuts, but also the nuts that don't have the standard tear shape, that are shaped more like buttons, with a rounded edge instead of the point. Almond anomalies.
What a ridiculous person I am. I unscrew the jar and tip as many anomalies as will fit into my mouth.

Red at the Bone by Jacqueline Woodson

Quiet yet powerful. Woodson creates vivid characters using the sparest of prose. In this polyphonic novel that spans several decades, we come to know five people from three generations of a single Black family in Brooklyn. I especially loved Iris, a prickly unwed mother without much in the way of maternal feelings, who explores her bisexuality at college.

Something about memory. It takes you back to where you were and lets you just be there for a time. 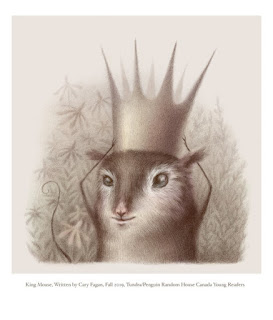 Delicate graphite drawings by Dena Seiferling are perfectly matched to the gentle tone of this story about instant celebrity and friendship. A heartwarming Canadian picture book.

Washington state high schooler Keira Johnson secretly develops SLAY, an online role playing game to celebrate the Black experience in a worldwide diaspora. “It‘s a double entendre, meaning both to greatly impress and to annihilate.” When a player is killed in real life, media attention brings cyber trolls and claims that it‘s racist and illegal to exclude non-Black players, Keira‘s haven might be destroyed. Excellent fast-paced and moving audiobook.

As we duel, as we chat, there's an understanding that “your black is not my black“ and “your weird is not my weird“ and “your beautiful is not my beautiful,“ and that's okay.


I was happy to be back in a gripping story with former police detective Jackson Brodie, friend to anarchy, upholder of justice (which is not always the same as upholding the law). Human trafficking, murder, and so many secrets… but Brodie untangles the mayhem and even sorts out some of his own personal stuff too.

[Her older brother] was employing a very nice illustrated edition of the Grimm brothers to introduce Candace to the more evil side of fairies, tales where people were cursed or abandoned or had their toes chopped off and their eyes pecked out […] because he felt that someone ought to counter the fluffy pink world she was being swallowed up by.

Drawn from Nature by Helen Ahpornsiri

An adorable natural science picture book for all ages. All of the illustrations are collages, painstakingly created entirely from flowers and foliage. Inspiring!

My admiration grows the longer I reflect on this queer, peppy time-travel triple narrative set in the Dominican Republic. Can the past be manipulated to avert future ecological disaster? Can altruism triumph over self-interest? A transgender man, Santera sorcery and a magical sea anemone are key elements in this vertiginous exploration of colonialism, gender, art and greed.

Los Charamicos was a backwards town, dirty and small, and completely dependent on tourism—in other words, prostitution, in all its varieties. 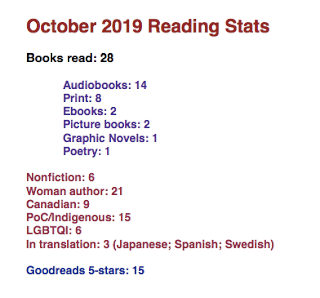