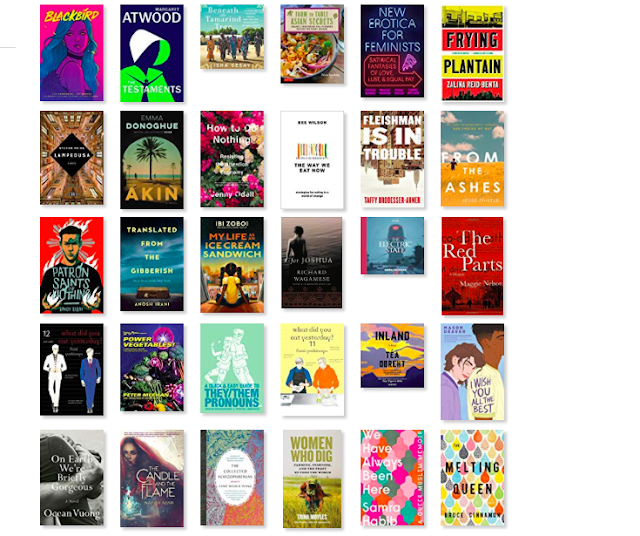 Here are some of my favourite books out of the 32 that I read in September:

My favourite read in September. Wang writes eloquently about her experiences as a person living with schizoaffective disorder. One of the best books about mental health that I've ever read; it is so good that I bought a copy to give as a gift.

As I grew older and my symptoms worsened, my mother at times expressed deep remorse and guilt at the fact that she had passed this “suffering” on to me, and presently tells me that I would be better off not having children. There are two issues here: one being the act of passing on a genetic burden, and the other being my ability, as a woman living with severe mental illness, to be a good mother.

As Nellie Bly‘s anecdotes, and my own, indicate, a primary feature of the experience of staying in a psychiatric hospital is that you will not be believed about anything. A corollary to this feature: things will be believed about you that are not at all true.

“I went to Yale” is shorthand for “I have schizoaffective disorder, but I‘m not worthless.”

Heartbreaking autobiographical fiction in the form of a letter from a gay son to his illiterate Vietnamese American mother: “the very impossibility of your reading this at all makes my telling it possible.” It‘s told in tender fragments: “I‘m not telling you a story so much as a shipwreck—the pieces floating, finally legible.” It‘s a yearning for belonging, and a coming to terms with mental illness, queerness and loss. It‘s gorgeous. I applaud the news that Vuong has recently received a MacArthur Genius grant.

Yes, there was a war. Yes, we came from its epicentre. In that war, a woman gifted herself a new name—Lan—in that naming claimed herself beautiful, then made that beauty into something worth keeping. From that, a daughter was born, and from that daughter, a son.All this time I told myself we were born from war—but I was wrong, Ma. We were born from beauty.

You and I, we were Americans until we opened our eyes. They will want you to succeed, but never more than them. They will write their names on your leash and call you ‘necessary,‘ call you ‘urgent.‘

“I‘m not what your mamma says I am.” His gaze is lowered as he tells it, his rhythm cut with odd pauses, at times slipping into near-whisper, like a man cleaning his rifle at daybreak and talking to himself. And I let him run his mind. I let him empty. I didn‘t stop him because you don‘t stop nothing when you‘re nine.

This short, tragic story—told with a light touch—brings to life universal experiences of colonialism: dispossession from ancestral lands, cruel injustices and the crushing of hope for a better future. Why read a depressing story set during the Mau Mau Uprising in Kenya? Because it‘s one you may never forget. And because novels like this help us understand exactly how the aftereffects of colonialism are still being felt, all over the world.
Reading this classic reminded me strongly of another novel set in about the same time and place: Dust by Yvonne Adhiambo Owuor (I reviewed it here).

Weep not, child
Weep not, my darling
With these kisses let me
remove your tears
The ravening clouds shall not
be long victorious
They shall not long possess
the sky...
-Walt Whitman, from the epigraph

She learned letters and manners from the pale, dismayed wives of her father's subordinates, who raised her to defend the hearth and revile a lie--nominally at least, for the older she grew the more she came to recognize falsehood as the preservative that allowed the world to maintain its shape.

I was on page 62 of this novel, thinking maybe I‘m not in the mood right now for a story set in 19th century America. Having just finished the exquisite Weep Not, Child by Ngugi Wa Thiong‘o about the injustices of colonialism, I was not exactly willing to open my heart to the hardships of settlers in the Wild West. And then I came upon the above sentence. Téa Obreht seduced me with her words. I continued. I was richly rewarded.

Alternating storylines are told from the close perspective of two main characters in 19th century America: Lurie, orphaned as a child shortly after emigrating from the Ottoman Empire, and Nora, a settler struggling with her regrets in Arizona Territory. The third main character is Burke, a camel. It was well worth getting to know them in a tale that gradually gains momentum. I could feel the want, “That vast and immutable want everybody, dead or alive, carried with them all the time.”

“He‘d forgive you soon enough. Boys always do.”Desma espoused the kind of easy faith in children only held by people who‘d never raised any themselves. And thank God for that, for it was good to be reminded of the merits by someone who lacked the constitution to withstand many of parenthood‘s most profound rewards: the shying and the sulking and the constant ingratitude, and eruptions like the one last night, […]

While it took a while for me to sort out who exactly was voicing this novel and I was also slow catching on to the point of view switches, I immediately engaged with the characters. I was reminded at first of Tom Perotta‘s Mrs. Fletcher, then even more strongly of Lauren Groff‘s Fates and Furies. Society‘s constraints against being our true selves is made poignant in this novel about marriage and other relationships in middle age life.

I'd grown up not allowed to read the same young-adult novels about babysitters and pretty blond twins that my friends read. My mother thought young-adult books were trash for degenerates and were certainly a red carpet to teen pregnancy and drug use.

Equity, grief, guilt and search for identity, as seen through 18-year-old Jay Reguero, whose father is Filipino and mother is white American. When his cousin is murdered in the Philippines, Jay travels there to find out what happened. Duterte's war on drugs is an important backdrop, while the tensions within Jay's extended family are explored and characters are believably developed. One of many strengths: inclusion of queer family members. Also, it was great to hear Tagalog and Bikol words aloud in the audiobook.

All the stories follow a similar pattern. Someone is accused without evidence. They are killed without mercy. Then the police cover it up without regret. Of course, the official report reads that the suspect resisted arrest, but this is contradicted by videos, anonymous eye witness accounts, or forensic evidence.

How to Do Nothing: Resisting the Attention Economy
by Jenny Odell
Audiobook read by Rebecca Gibel

I started this in print format and found it hard to follow Odell's long, philosophical sentences. When I switched to audio format, I adored her style. Her work is a call to activism that stresses the importance of taking time to listen, to pay attention, and to contemplate. Also, it's an invitation to reconsider the idea of what it is to be productive.

As someone who is both Asian and white, I am an anomaly or a nonentity from an essentialist point of view. It's not possible for me to be native to anywhere in any obvious sense, […] but the sight of western tanagers, a favourite bird, migrating through Oakland in the spring, gives me an image of how to be from two places at once.

My most-liked Facebook post of all time was an anti-Trump screed. […] It‘s not a form of communication driven by reflection and reason but rather a reaction driven by fear and anger. Obviously these feelings are warranted but their expression on social media feels like firecrackers setting off other firecrackers in a very small room that soon gets filled with smoke. 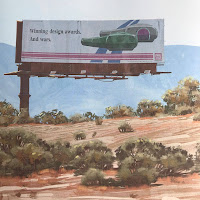 The Electric State by Simon Stalehag

An unsettling alternate history set in 1997, with America‘s citizens enthralled to virtual reality and suffering the aftermath of neurological warfare. 18-year-old Michelle is on a road trip mission with her sentient robot, surrounded by eerie additions to the Mojave dessert and mountain landscapes on their way to the Pacific. This oversized illustrated novel has amazing artwork across double pages. Surreal, creepy and beautiful. 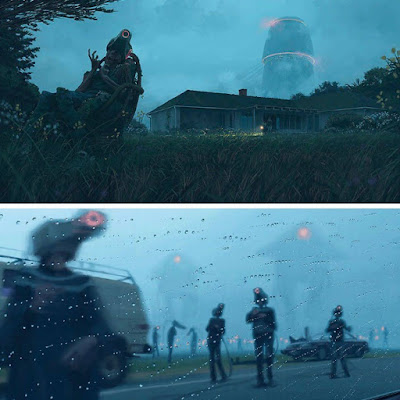 I loved The Handmaid‘s Tale, which I read shortly after it was published. The tv adaptation (even though I haven't seen it) and Atwood's previous avowal that there wouldn‘t be a book sequel had me skeptical that The Testaments would be any good. I was wrong. I galloped through the audiobook, relishing the format: multiple points of view, performed by six audio narrators including Atwood herself. Very satisfying.

To See the Stars by Jan Andrews

Edie is 15 when she leaves Newfoundland to work and help support her younger siblings at home. The hard life and limited options for the working poor in the early 20th century is portrayed in a quiet, poignant way. It took a while to adjust to the rhythm of short sentences and Newfie words (brewis, sheeny, mauzy) but soon I felt I understood Edie‘s heart. Garment worker unionizing in NYC, the Triangle Shirtwaist Factory fire—it‘s all made real.

The sky was clear, clear, clear. The night was so beautiful. Everything where I was—on earth—all wind and whirling, everything up above as still as it could be. Stars by the million, all so gleaming. The blackness in between them, dark as dark. A sight worth seeing. I held the baby up to look. 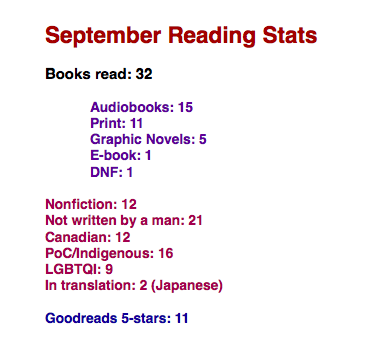