Stories about individuals who surmount tragedy are always inspiring. Dave Eggers writes about one family's ordeal during the aftermath of the Hurricane Katrina disaster in New Orleans in 2005. When his wife and four children evacuated, Abdulrahman Zeitoun, a Syrian-born American citizen, stayed behind to look after their home, rental properties, and painting contract business. Zeitoun made himself very useful. For more than a week, he paddled around in a canoe, helping people and left-behind pets. It's all very heartwarming. And then Zeitoun was arrested on suspicion of terrorism. His story becomes so nightmarish as to be nearly unbelievable. There are a few slower moments in the book, but overall it is a gripping read. Read an interview with Zeitoun in The Guardian. Another great book about survivors of Hurricane Katrina is the graphic novel, A.D.: New Orleans after the Deluge by Josh Neufeld.
Posted by Lindy at 11:23 AM No comments:

Michael and his friends -- Tommy, Mixer and Bones -- are assigned to remedial classes. Nobody expects much from them. Fifteen-year-old Michael, who narrates the story, is probably the smartest of the four, but he doesn't see the point in making an effort. Mr. Haberman, their English teacher, addresses them as gentlemen, but no one takes that old guy seriously. Until Tommy goes missing. And it appears that Mr. Haberman might have something to do with his disappearance.

A tense and gritty story about stifled lives in a small town with few opportunities. A gay subplot is handled well. Michael's voice is believable and unique enough to stand out amid the many teen novels narrated in first person. There were times when he could not quite find the words, as when he searched for "non sequitur" -- he knew there was some kind of word to describe that but could only come up with "non sequence."

The body bag pictured on the cover is a bit of overkill, but maybe that's what it takes to get some readers to pick up a book. The novel that the boys are supposed to be studying in Mr. Haberman's class is Crime and Punishment. They do learn about consequences to their actions. It's also a book about how friendships and loyalties change as boys come of age. Grade 7 - up
Posted by Lindy at 10:50 AM No comments:

I needed a big, fat book to get me through a weeklong trip by air to Whitehorse and Wolf Hall, the 2009 winner of the Man Booker Prize - at 650 pages long - was just right. It's about Henry VIII and how he - rather than the pope - became the head of the church in England in order to divorce his first wife, Katherine of Spain, and marry Anne Boleyn. It is also about Thomas Cromwell, a lawyer who was born to a lowly and violent blacksmith, and how it happened that he became Henry VIII's powerful righthand man, drafting laws that modernized England. The story only covers about eight years, from 1527 - 1535, but the cast of characters is huge and the social, religious and political changes underway during that time are complex.

I really liked getting to know these people, especially Cromwell and his extended family. Mantel brings the period to life with small details woven into the storyline (rather than through exposition). For example, a poor woman who comes to Cromwell for help describes how she has been finding odd jobs since her husband left her; she is helping with the yearly laundering of the bed linen at a convent.

I also enjoyed seeing Anne and Mary Boleyn from a different viewpoint than that given in Philippa Gregory's The Other Boleyn Girl. By the end of the book, Cromwell and Anne Boleyn both still have their heads attached to their shoulders, so there much still to tell, and I've heard that Mantel is working on a sequel.
Posted by Lindy at 6:58 AM No comments:

Dental drama! After a fall that knocked out her two front teeth when she was 11, Raina Telgemeier underwent six years of orthodontic work. She uses full-colour art to illustrate her story, which is set at school and in her home in San Francisco. Raina also negotiates coming of age amid a group of friends who are mean to her. I really liked the way she portrayed her growth in self-esteem. The tone remains positive throughout and girls from about age 8 or 9 up through to high school will appreciate this book. Check out Raina's website to see some of her other comics.
Posted by Lindy at 1:20 PM No comments: 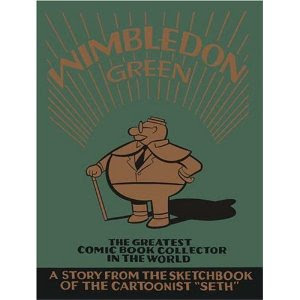 In a story told from multiple points of view, readers piece together a puzzle regarding the identity of Wimbledon Green. Was he formerly known as Don Green? Is he now using the name H. Arbor Grove? One fact is not in question: he was the greatest comic book collector in the world. People who are obsessed with collecting items tend to be eccentric, and so we meet all kinds of unusual guys from the world of comic collectors.
This graphic novel has been around since 2005, but I was put off reading it because of the cover and because of the dense contents. Wimbledon Green is the cartoon character on the cover and he's drawn in the style of strips from about the 1930s or 1940s. (I'm not a fan of old comics.) Inside, Seth uses many panels per page; often 12 - 20, sometimes more. So each one is pretty small. Anyway, once I started actually reading instead of just flipping through the images, I was totally hooked. Each speaker is portrayed as if interviewed in a documentary. The whole thing comes together wonderfully. I loved it.
Posted by Lindy at 10:42 AM No comments:

The idea was humane and grand: create a prison that would be like paradise. Once in, however, no one was allowed out. And the prison grew into a conscious being, watching over everything inside itself. Watching the hellish life of the inmates. Outside? There was the Warden, watching over the prisoners and the prison. The Warden watched what happened Outside also. He had grandiose plans for his daughter, Claudia. But Claudia had her own ideas.

This fantasy novel by Welsh author Catherine Fisher describes a complex and fascinating world. Grade 7 - up
Posted by Lindy at 8:54 AM No comments:

Frontenac House received 267 manuscripts in their 2010 call for submissions. Ten books were chosen by blind jury. This was one of them.
It is impossible for me to be objective about my sweetheart's book of poetry, so I'll just paste in some of the judges' comments: "This is the 'classic' hard-drinking, hard-living, gravelly poet's voice -- only it comes from a woman. It's a bust-out-of-closet voice where occasional touchstone rhymes and furious lists score the page. The poems are stripped down, poignant, exact, and as heartily playful as any serious blues. Here is Sappho crossed with the Supremes."
Check it out for yourself in a video clip of Laurie MacFayden reading from White Shirt on blipTV. She's brilliant.
Posted by Lindy at 3:47 PM No comments:

Home Is Beyond the Mountains by Celia Barker Lottridge

In 1918, war forced nine-year-old Samira and her family to leave their home in an Assyrian village in northern Iran, fleeing for their lives on foot. Only Samira and her older brother Benyamin survived. They lived in refugee camps and orphanages for five years, and then walked home. Their journey from start to finish covered thousands of kilometres. It is an amazing story and it is based on true events.
Samira is a believable character and I enjoyed the many details of her daily life, the vivid setting and emotional power of the story. The map at the front showing the route the children travelled was a helpful addition.
Give this to readers in Grade 4 - 8 who are interested in the lives of young people in other parts of the world. Similar titles: The Breadwinner trilogy (Deborah Ellis); Libertad (Alma Fullerton); and Iqbal (Francesco D'Adamo).
Celia Barker Lottridge will be reading from this book on June 13th in Edmonton.
Posted by Lindy at 2:49 PM No comments:

Born in 1986, Zoe Trope was 14 and 15 when she wrote about her life in Portland, Oregon. She used pseudonyms like 'braid bitch,' 'wonka boy,' and 'vegan grrl' to protect people's identities. Zoe has a huge crush on her best friend, a gay boy she calls 'linux shoe.' She struggles with identity, resisting labels, and falls in love with a woman (Scully) who then transitions to a man (Skull). The best way to get a feel for Zoe's unique and brilliant style is to read it:
"I don't understand girls who -- wait, never mind, I just don't understand girls. Especially the ones who smear their faces with brightly colored crap every chance they get. I want to shove that lipstick pencil into her eye. Oh, the people you can judge while riding public transportation."
"Tomboy lesbians in white Adidas shoes with sharp spiky hair and sometimes glasses break my heart. Maybe I'm just a stupid lipstick lesbian. Or bisexual. Or something. If I was a gay man, I could be catty and witty and bitchy and gay and it could be so much fun. I'd actually have a reason to be at a pride parade instead of just being... confused."
"Teenagers shouldn't write about love, ever. They sound like pineapples in a blender."
"My poor parents. The shit I put them through. I am the reason why I don't want to have kids."
"My girlfriend turned into my boyfriend and didn't even ask my permission. [...] I love him for who he is and pretend pronouns don't matter but the truth is I can't keep the story straight. I don't know if he's a boy now and he's still a boy in the past, or if all my memories of her are now memories of him. I'm not worried about the future as much as I'm worried about the past. About keeping my memories real and not sacrificing them to match the present. I don't think you meant to change my sexuality with the switch of a pronoun but you did. Now I'm the girl with a boyfriend and just when it was getting easy for me to be a lesbian, you turn me straight again."
"I'm so sick of lying. I'm so sick of telling the truth. I want another option."
Posted by Lindy at 6:31 AM No comments: