Books and a Busy April 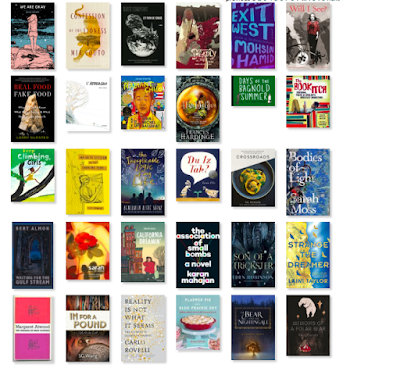 Another month, another 30 books. Even though I read the same number of books in April as in March, this time I only rated 7 of them with five stars in Goodreads, while March had an amazing 15 of them. Before I tell you about some of the bookish highlights, I want to mention a couple of other April things.
We hosted an open house art show and sale of Laurie's art, and so our place still looks like a gallery. I love it. We forgot to put out clean towels and so our guests had to wipe their hands on their clothing (I guess) but other than that everything went well on the big day. Earlier in April, we went to a lot of Edmonton Poetry Festival events and I'm impressed with how the festival keeps getting better. Laurie performed her work at a couple of places and she keeps getting better too. (Ha!)

Now, on to highlight some of the books, starting with stats: 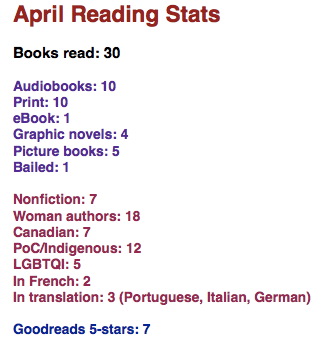 Lincoln in the Bardo by George Saunders
[audiobook with multiple narrators: 7 hr 30 mn]
I expected this would make me cry. It didn't. I expected to love this audiobook. I did. So much so that I started again from the beginning after finishing it. Saunders has immense compassion for human frailties, while encouraging us to see the humour in those shortcomings. Lovely. The text loops and circles and dazzles. I wouldn't have guessed that a book about Abraham Lincoln's grief over the death of his child would be my favourite book of April, and quite possibly of the year so far.

The male members of the species Homo sapiens appealed to me a great deal. They were soft and small and had fragile but adorable teeth. Their fingers were delicately constructed, the fingernails all but nonexistent. Sometimes they reminded me of stuffed animals, lovely to hold in one's arms.

I wanted to wrap myself in the black woollen blanket of grief and brood over my clutch of sorrows until they hatched and flew away.

All of them were referred to as birds, even though the only thing they had in common was wings. the sparrow, a brown mixture of modesty and agitation, the blackbird with her unassuming humour, the magpie's painted mask, and the pigeon, who lost no opportunity to repeat her favourite motto: 'Really? How interesting. I had no idea!'

Exit West by Mohsin Hamid
[audiobook narrated by the author: 4 hr 44 mn].
This love story about refugees was even better than I had hoped. Ethical, believable characters. Excellent usage of the terms 'natives' and 'migrants,' emphasizing the common experiences of shifting world populations. The magic doors you may have heard about that are in this book are an unobtrusive plot device used in a similar way to the trains in Colson Whitehead's The Underground Railroad. Straightforward storytelling. Short and bittersweet.

Every time a couple moves they begin, if their attentions still drawn to one another, to see each other differently, for personalities are not a single immutable colour, like white or blue, but rather illuminated screens, and the shades we reflect depend much on what is around us. So it was with Saeed and Nadia, who found themselves changed each other's eyes in this new place.

An adorable picture book with anthropomorphic insects and an invented language. I loved it so much I bought a copy to bring as a gift to Geneva next month, for twins who will soon be four years old. They live in a quadrilingual household, so this should be perfect! 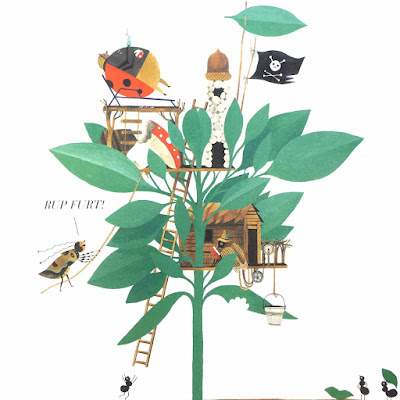 A Face Like Glass by Frances Hardinge
An amnesiac child, a bizarre underground world, cheeses with killer attitude, wines that alter memories, a populace with faces blank of expression... this dazzling standalone fantasy has a twisty plot full of lies and deception. Ages 10-adult.

Days of the Bagnold Summer by Joff Winterhart
It's been five years since I first read this and it's every bit as good on rereading. Posy Simmonds says there's "no truer portrait of teenage and parental angst." I picked it up when I saw news that a film version is coming out.

Son of a Trickster by Eden Robinson
High school is hard enough for Jared without parents who deal drugs and party for days. Then there's the raven who talks to him, and the annoying patter of the fireflies over his girlfriend's head - no one else sees or hears them. If Jared really is the son of a supernatural being, why isn't his life better? Gritty, witty and full of heart.

They had a four-bedroom house, but when they were alone it felt like a one-room shack. She'd talk to him through the door when he was on the can. The red glow of her cigarette was his night light as she sat beside his bed in the darkness. He smelled her Craven Ms in his dreams. A trail of her texts followed him through his day.

Richie disappeared into the cabin and came back carrying an AK-47. [Jared's] mom squealed and clapped her hands. they took turns firing into the trunk of one of the target trees, which quivered until it creaked, cracked, then fell over.
"Tim-ber!" they yelled together.
"Normal people buy their trees from the Boy Scouts," Jared said. "Normal people don't hunt their Christmas trees down and kill them."

"I know all the change in Georgie's piggy bank." Crashpad's mom made a V of her fingers, pointing to her eyes and then to Jared.
What did you say to that? On the one hand, it was hilarious. On the other, how craptastic was your life when old ladies felt the need to threaten you with movie gangsterisms?

In for a Pound by SG Wong
An entertaining hard-boiled female detective mystery, set in an alternate 1930s Los Angeles in which North America's west coast was colonized by the Chinese, and where it's perfectly normal to be haunted by ghosts... except not against your will. Second in a series; it's not necessary to read them in order. Wong is an Edmonton author and my Two Bichons book club was graced with her presence at our meeting in April. What a treat!

And speaking of treats, how about some Coconut Macaroons (from Flapper Pie and a Blue Prairie Sky cookbook) topped with Candied Kalamata Olives (from Crossroads cookbook)? Trust me. It's a surprisingly good taste combination! I had fun playing with recipes in these two:

Crossroads by Tal Ronnen
Mediterranean first, vegan second. Lots of steps, but all six of the recipes I tried turned out great. Signature ingredients: nutritional yeast flakes; Kite Hill almond milk cheeses (I don't think these are available in Canada); and milk made from soaked cashews.