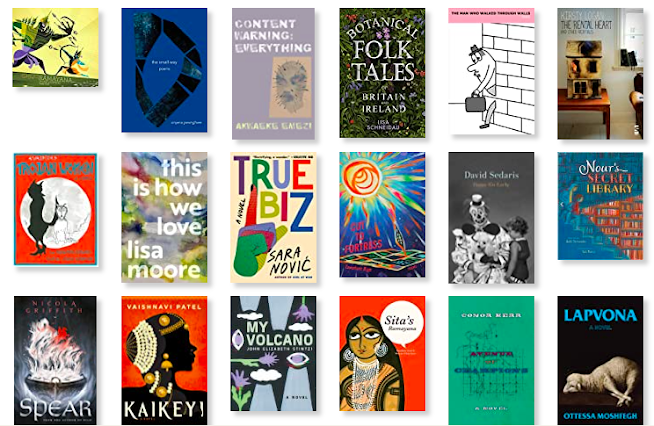 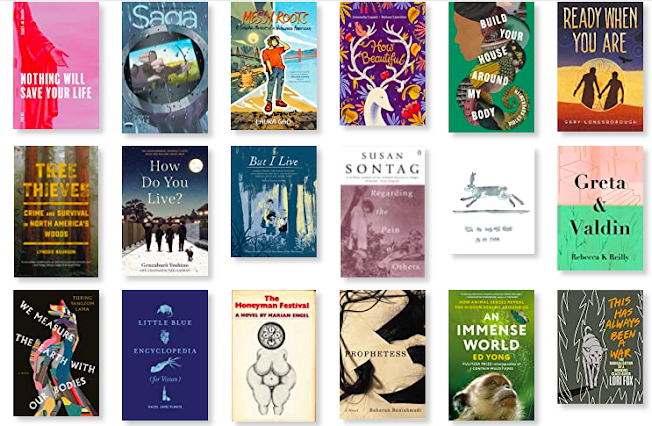 Lots of queer books and lots of Canadian authors this month.
Here are the all-star reads:

My Volcano by John Elizabeth Stintzi

Spear by Nicola Griffith, audio read by the author

Small Things Like These by Claire Keegan, audio read by Aidan Kelly

Avenue of Champions by Conor Kerr

The Rental Heart and Other Fairy Tales by Kirsty Logan

Take the Long Way Home: A Memoir by Jon Claytor

But I Live: Three Stories of Child Survivors of the Holocaust edited by Miriam Libicki

How Beautiful by Antonella Capetti and Melissa Castrillon

These last three are all rereads:

The one that I didn't finish this month is a good book for the right readers (teens): 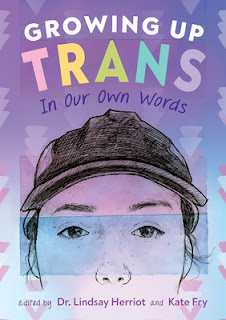 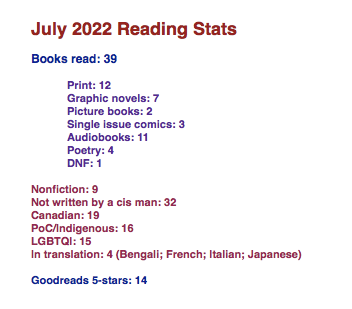 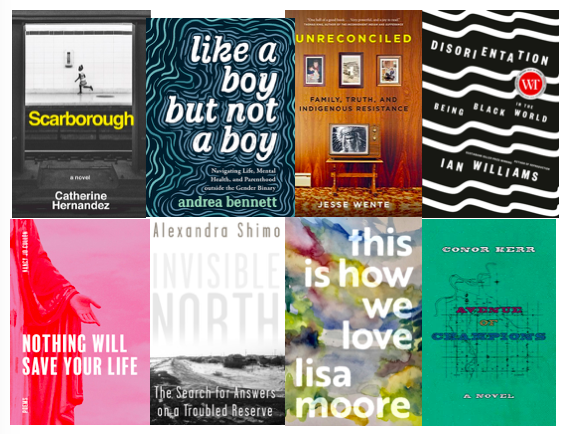 Cory swung his prize daughter into the passenger seat of his car. Now was his chance to warm it up. Get it nice and toasty; point all the vents toward his princess, and blast hot air at her. As the windows defrosted, Cory ran his rough hands, his dirt-stained hands, through her frozen strawberry blond hair and sobbed openly. Through his wailing he blubbered, "We're gonna pass by Timmy Ho's and get you a hot chocolate. Warm you right up. Daddy loves you. Were you in there for long, Laura? I'm really sorry. I would have come sooner, but Mommy just called me." He wasn't sure how much she understood, but her gaze was steady on his weepy eyes.

Sunday, October 25
I'm driving south on Main Street. A Black Woman waits to cross outside a Tim Hortons. She's wearing snowpants although its not very cold by Canadian standards. New immigrant? I feel ashamed at this snap assumption.

Disorientation: Being Black in the World by Ian Williams

My second job was at Tim Hortons: more yelling. The owners were a husband and his wife; the husband did spot checks to make sure we kept the bathrooms locked, and then yelled at his sixteen-year-old workers about "crack whores" and needles when we didn't. Once, I cried after the wife yelled at me; my supervisor told me not to let her catch me crying, or things would get worse. (I try to picture, now, being in my forties or fifties and screaming at teens; I can't picture it.)

When I worked at Tim Hortons in the early 2000s, the milk and cream came in ten-litre sacs with built-in spouts. The sacs were rectangular, made of clear plastic, slick with condensation. They were heavy, difficult enough to carry from the fridge to the front of the store that the only real way to do it was to hug the sac against your chest. The whole rest of the day after replacing the cream or milk, I'd smell waves of soured dairy emanating from my striped polycotton blend shirt. This smell returned a few days after Sinclair was born.

Tim Hortons was the worst job I'd ever had, and Adbusters was the second-worst. One of my first tasks was to read through a book the magazine was producing and offer feedback; I came across a picture of a desert with one line floating mid-air, something like, "It takes a thousand years to produce one inch of soil." When I flagged it for fact-checking, a senior editor told me not to bother: the page had appeared in the magazine before, the same concern had been raised, and the publisher didn't care if it was true. The greater truth was that it sounded good. And that it felt true.

Like a Boy But Not a Boy: Navigating Life, Mental Health, and Parenthood Outside the Gender Binary by Andrea Bennett

But for all of Canada's territorial instincts and actions around the stories told here, in its denials of a proper voice for Indigenous peoples it has ruined any chance at telling its own story truthfully and completely. Indigenous communities are as crucial to the story of this place as their English and French counterparts, so in attacking the narrative sovereignty of First Nations, Metis, and Inuit peoples, Canada has torn a hole in itself. That absence is the root of this nation's ongoing identity crisis. As it attempts to fill the void with hockey, Tim Hortons, and jean jackets, it ignores the truth that what has been and remains missing from Canadian culture are the stories of Indigenous peoples, the stories that have been told on this land for thousands of years.

I take a taxi to the Northern Store to buy groceries. We drive to another house to collect a family of four on their way to a birthday party. In the car, we make small talk about our favourite types of cake. In the Cree spirit of egality, all the taxis operate like buses: the cars pick up as many passengers as possible, with everyone paying four dollars regardless of the destination.
Hungry, I decide to stop at one of the local stores a few metres away to grab a chocolate bar and coffee. Most of the stores sell Tim Hortons with Coffee Mate. I stand by the counter, and sip.

His mother who might say anything, who had the capacity to startle with drilling questions, or flummox with shards of raw honesty that made people see themselves in new ways, his mother could only think to ask where Lily got her dress.
Lily had said, Online. A one-word answer that did nothing to crack the bizarre electricity between his date and his mother, both inert, unable to move. Lily was into girls, but she and Xavier had been partners on a science project, and they fell into going to the prom together without really talking about it much, because she was such a laugh.
I expect you to take care of him tonight, his mother blurted. I expect you to make sure, she was telling Lily, that nothing bad happens to him or to you. I trust you in this. Do you think you're able to do that? It was a bizarrely sexist thing for his mother to say. Stella had gone to her prom in a dress that had been strategically ripped and torn, a pair of army boots. It had been necessary to make sure neither of the grandmothers heard about it.
Lily's face instantly became the way Lily's face usually was, full of being up for anything. Her face had been as still as a lake, and glassy with the too-dramatic makeup, because she seemed to think she owed something to the dress, which had cost a fortune of her own money from working the counter at Tims. But his mother had busted out of the doleful stillness that had taken over her face, and instead here was his mother's ordinary rapacious need for intimacy or cutting the crap.
That's exactly what I plan to do, Lily said. I'm going to keep an eye, don't you worry. I has every intention of making sure we has a good time.

This Is How We Love by Lisa Moore

Now we line up in cars at the drive-thru as we double-double down,
while our ahistorical children play under the backyard tree
(those darling digital citizens of our wombs).
Meanwhile, broadcast across glass, phosphor, cerium, plastics, copper,
tin, zinc, silicon, gold & chromium: The spectacle of human migration,
displacement as entertainment industry,
kitten videos as news of the day,
plus the variation, mutation, competition & inheritance of memes
despair has become --
"things have to be named properly."

Inside the Tim Hortons, a cat is the least of anyone's worries. It's packed in there. One side of the eating area has been completely taken over by homeless people. They're spread out on the benches and on the floor, under tables and in the aisles. Prairie and I find a spot under one of the only free tables and settle in. I use my backpack as a pillow. It's uncomfortable as fuck and the floor is sticky, covered in something that's definitely not double-double. But shit, it could be, too. At this point, I'm tired and my mind is clogged from eating only scraps and smoking cigarettes all day. I put Prairie right next to me. I'm not worried about anyone taking her since everyone here has their own problems to deal with. At this moment, we all just want to get through the night and this cat is the only thing bringing me any sort of comfort.
I never truly sleep in a situation like this. I'll get a bit of rest and then I'm awake again, constant vigilance, you know. Never comfortable. Cold and sticky, fluorescent lights burning down, and a stream of people from the university hospital and kids from the residence buildings coming in for coffees and Timbits. They all avoid looking at our little camp. Which is probably for the best, as I don't want to see anyone I might be in a class with. It's already embarrassing enough having a cat in class. Now I have a cat and I'm sleeping on the floor of the Tim Hortons. Classic fuck-up right here.

Avenue of Champions: A Novel by Conor Kerr

Run Towards the Danger: Confrontations with a Body of Memory by Sarah Polley

Woman Running in the Mountains by Yuko Tsushima

How High We Go in the Dark by Sequoia Nagamatsu

I Was Better Last Night: A Memoir by Harvey Fierstein; audiobook read by the author

Ain't Burned All the Bright by Jason Reynolds and Jason Griffin 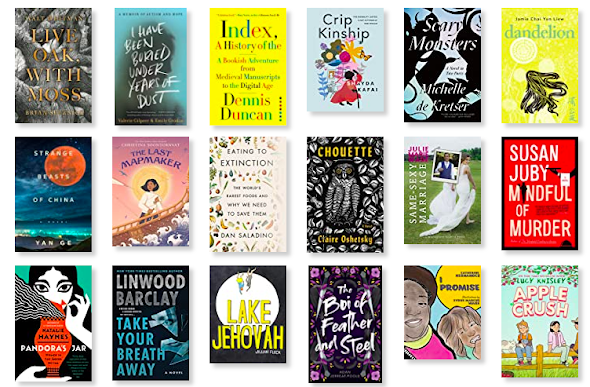 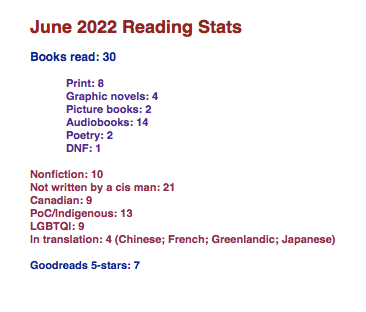 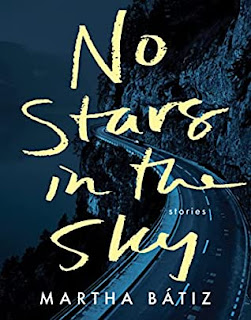 May 2022 Reading Stats and Booktube Links

Buffalo Is the New Buffalo: Stories by Chelsea Vowel

Ten Steps to Nanette by Hannah Gadsby, audiobook read by the author

When We Lost Our Heads by Heather O'Neill

No One Else by R Kikuo Johnson

In the Company of Men by Veronique Tadjo, translated by John Cullen

Heaven No Hell by Michael DeForge 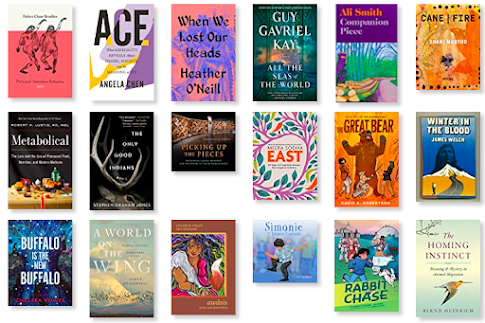 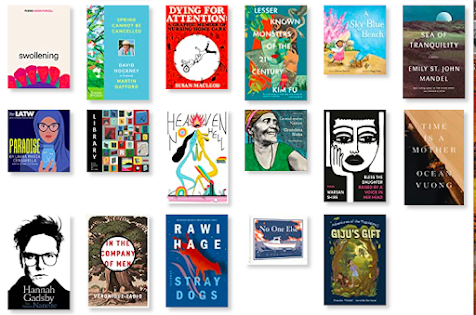 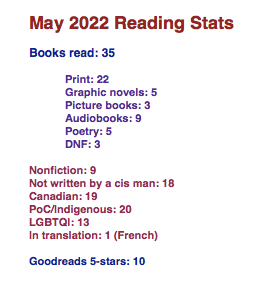 Three that I abandoned:

Links to my May booktube videos:

Saturday Reads May 21 All Indigenous Edition 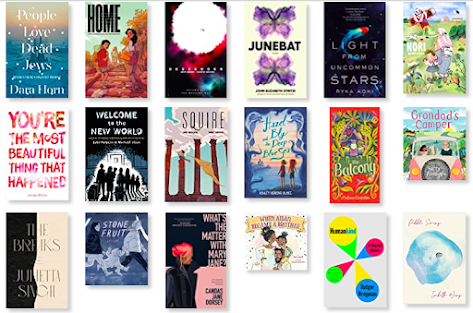 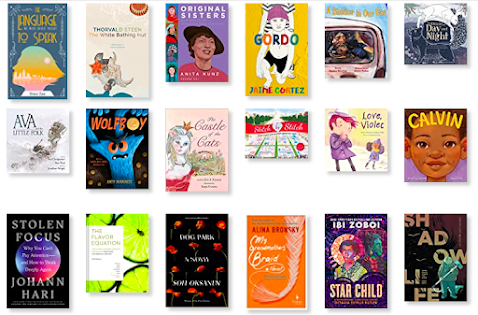 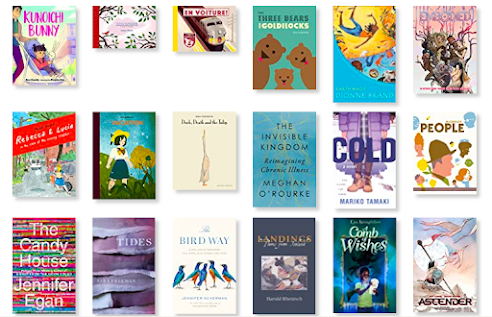 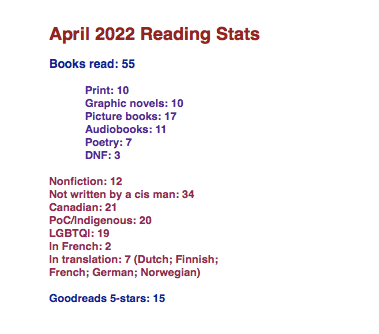 These are the three books I started but gave up on in April:

Best Nonfiction: The Treeline: The Last Forest and the Future of Life on Earth by Ben Rawlence, audiobook read by Jamie Parker 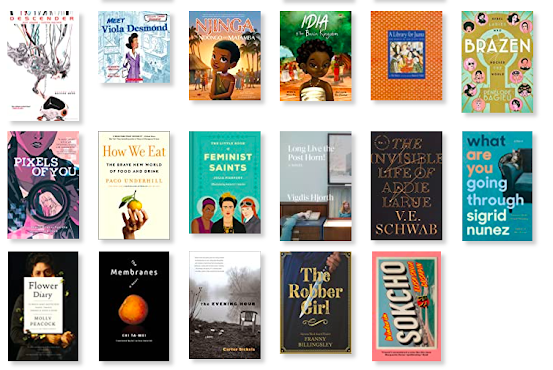 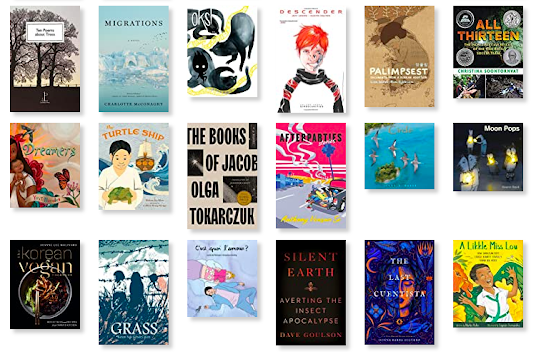 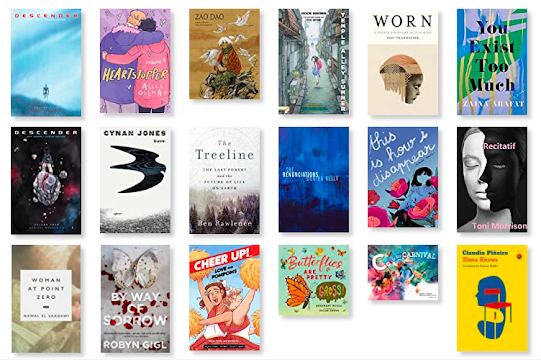 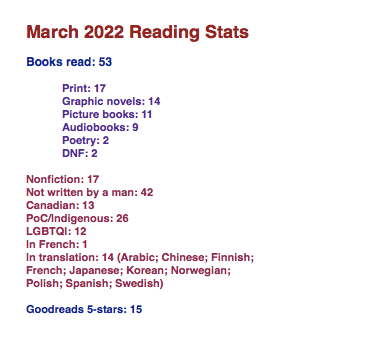 Best Essays: 12 Bytes: How We Got Here. Where We Might Go Next by Jeanette Winterson (LGBTQ)

Best Fiction Audiobook: The Final Revival of Opal and Nev by Dawnie Walton, read by a full cast

Best Disability Own Voices: The Words In My Hands by Asphyxia (Deaf; LGBTQ)

Best Call to Action: What White People Can Do Next: From Allyship to Coalition by Emma Dabiri, audiobook read by the author 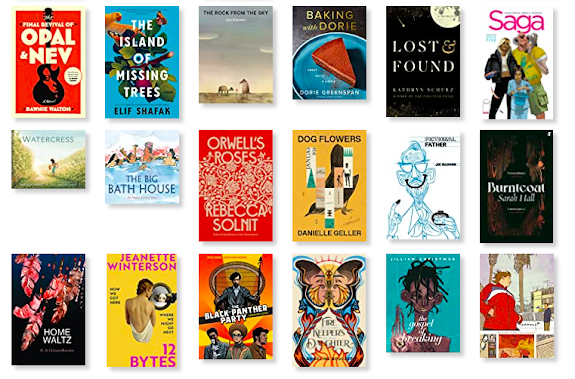 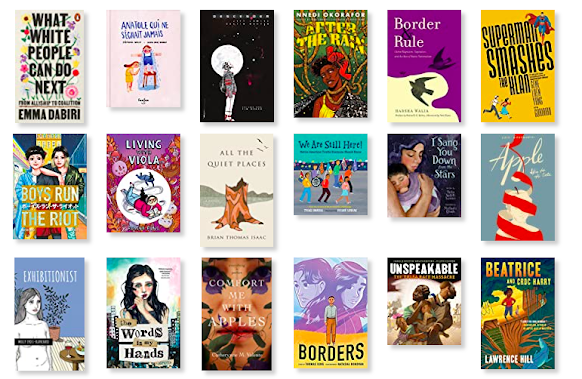 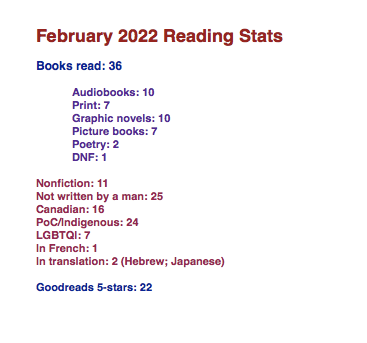