The Book of Negroes by Lawrence Hill

I've just finished listening to the 30th (and final) CBC Between the Covers podcast of The Book of Negroes. Narrator Kim Roberts did a wonderful job.

Aminata Diallo was 11 years old when she was abducted from her home in Africa. She recounts the many horrors she experienced after that, sold into slavery in South Carolina, yet always keeping hope alive that she would one day return to her homeland. As an old woman, Aminata worked with abolitionists in London to end the slave trade.

The storyline may put off some readers through its harshness alone, but Aminata's spirit provides a quality of transcendence. I grew to care more deeply about Aminata with each episode.

This book was entirely deserving of its win in CBC's Canada Reads challenge in March 2009. It also won the Commonwealth Writers Overall Best Book Award. In other countries, look for the title Someone Knows My Name.

Between the Covers podcasts are available free from CBC.
Posted by Lindy at 5:49 PM No comments: 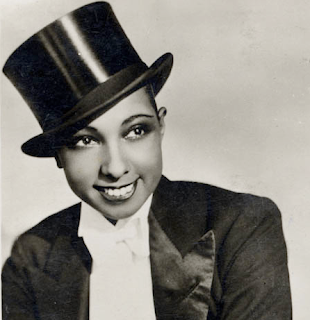 I'll be visiting Josephine Baker's former castle home, Les Milandes, in about a week's time, so I decided to read more about her. I selected a title from the library catalogue based on several factors: it was recently published (2007), illustrated, and written by a woman. When I had the book in my hands, I realized that it was far more scholarly than I'd expected. It required more focus than I had planned, yet I was captivated by the story of Baker's life.
Born into poverty in St. Louis in 1906, she achieved fame as an entertainer in Paris, starting in 1925. She became a French citizen, fought with the Resistance through WWII and adopted 12 multiracial children in the late 1950s. The "Rainbow Tribe" was her dream family, housed at the Chateau Les Milandes in the Dordogne. The place continues to be a tourist attraction to this day. Baker received a Legion of Honour medal in 1961.
I found that I was familiar with many of the photos; Baker wearing nothing but beads and her iconic banana skirt, in fabulous designer gowns, and seated backstage at a mirror. My favourite is of her crossdressing in a tuxedo. New to me was a 1975 image of her in a white beaded motorcycle outfit in Paris, when she rode a motorcycle onstage.
Here's a taste of the writing style: "Baker's life is a microcosm and a laboratory test case for the study of assimilation, acculturation, and identity invention." (p. 71) "Fashion allows its wearers to assume and discard virtual identities. Viewed in this way, fashion emerges as a discourse, or expressive form, independent of the codes of style, yet constantly referencing them." (p. 142) "Baker's danse sauvage and banana-skirt images are part of a colonial discourse and syndrome in which the subject is at once derided and desired. [...] Even when she had outgrown the dance, Baker was unable to abandon the cultural baggage of the banana skirt's problematic image." (p.153) In reference to a 1986 documentary film, Chasing a Rainbow: The Life of Josephine Baker: "A more detailed analysis of Baker's universal brotherhood project in relationship to similar utopian movements is necessary to contextualize this portion of the film." (p. 108) "The kernel of iterative narrtives of Baker's life remains the same but is repeated over and over in different motifs." (p. 279)
Baker is "a fascinating and ambivalent figure in feminist discourse." (p. 263) Her influence on younger black artists like Grace Jones is explored towards the end of the book. Intellectually stimulating.
Posted by Lindy at 7:51 PM No comments:

Milk: The Surprising Story of Milk Through the Ages by Anne Mendelson

Part history and part cookbook, Mendelson's work grew out of a lifelong love for milk and fresh dairy products. She would probably enjoy comparing tasting notes with Lucy Knisley (see previous post, French Milk.) I'm a fan of dairy too, even though I never drink milk straight. Instead, give me kefir, yogurt, butter and every kind of cheese... One of the best foods I tasted in New Zealand was thick fresh cream that tasted of barnyard - in the best possible way. The butter there is so yellow that it is obvious that the cows are eating grass and not grain.

Learn all kinds of interesting stuff and then turn to the recipes to get creative in the kitchen. I can recommend the directions for making paneer, an Indian cheese. I was so happy with the results that I've done it twice. It's so easy! The hardest part is obtaining non-homogenized milk. Mendelson is hopeful that consumer demand will make quality dairy products readily available in the near future. I hope so too.
Posted by Lindy at 7:27 PM No comments:

Drawings, photographs and text record 6 weeks in Paris; the author turned 22 and her mother was 50 in 2007. "The title is partly in reference to my love for the fresh whole milk that I found so different from American processed dairy." The author explains that the title is also to recognize the significant influence of her mother on her life. It is an ode to great food and art and a document of the struggle we face growing into adulthood.
Posted by Lindy at 3:11 PM No comments:

details from the edge of the village by Pierrette Requier

The details in Requier's autobiographical tale of growing up in a francophone community in northern Alberta are told with love and wit. In mostly English prose poem vignettes that incorporate some twangy Franco-Albertan slang, Requier documents her life from a very young child through to her present middle-age.
This is a book with much relevance to my own life. I re-lived sharing with my sisters the same few inches of bathwater that my mother had to haul and heat; the fragility of lamp mantles that disintegrated so easily, yet provided much better light than the old-fashioned kerosene kind; learning to swim in an icy lake; French teachers imported from New Brunswick speaking in unfamiliar accents; listening to CHFA French radio and wearing jack shirts as I grew older.
Requier's family was larger than mine by six. She was fourth of eleven siblings. Her mother baked 20 loaves of bread, twice a week. I especially loved the poem Ca-na-da! and burn your bra! It's about the day her mother got mad after listening to a priest's sermon about a woman's duty being to fill the cradle every year; that was the day her mother announced she was going on the pill. When I was about ten, I asked my own mom why she needed those pills packaged in round containers. She was in a grumpy mood and explained, "They're for my nerves, so that I can stand you kids!"
Posted by Lindy at 10:07 AM No comments:

I'm soon to be embarking on a three-week trip on foot through the Dordogne river valley, walking from village to village with a small backpack. This book, first published in 1952, was recommended as additional reading on the area by several modern travel guides. I'm very glad that I sought out a copy at the University of Alberta.
White writes about the geology, architecture, social and political history of southwest France with obvious love for her topic and in an engaging, accessible manner. It is the ancient history, the formation of the limestone causses and river valleys and the settlements there by successive peoples that interested me in particular.
Advice for the modern traveller is outdated, naturally. I was amused to read that I could expect my meals at a farm-hotel to be cooked in an iron pot over a fire. In summer "remember that arms and legs rashly exposed to the sun can give you fever, and that rayon does not protect the skin from actinic rays." Since it is April, very early in the season to be walking, I will be grateful for sunshine rather than rain.
This passage also caught my fancy: "It is fun to buy books in France; not because the shops are well stocked, for they are not. [...] But the bookshops are staffed by people in whom even the over-bookish education of France has not killed the taste for reading. It is only in France and Scotland that it has been my experience to be refused a book on the ground that it was not worth buying, though it stood on the bookshop shelf."
I'm only taking one book with me, Ali Smith's The Reader, and may therefore have occasion to test the services of a French bookshop.
Posted by Lindy at 7:30 AM No comments:

The Museum Vaults by Marc-Antoine Mathieu

An expert is hired to study, index and evaluate the ancient holdings of the Louvre museum in Paris. In these excerpts spanning 50 years from his journal, we travel deep into countless sub-basements, exploring the nature of art. Along the way, we learn the importance of framing - and how those humble rectangles lead to sequential art; we eavesdrop on security guards learning the correct way to chastise anyone getting too close to art; and the perfection of a glass pyramid above ground is demonstrated.

Mathieu's strong black and white artwork makes good use of the darkest shades contrasting with white and suits very well the Kafkaesque tale.
Will appeal especially to art lovers and comic fans with a sense of humour and a philosophical bent.
Posted by Lindy at 8:13 AM No comments: