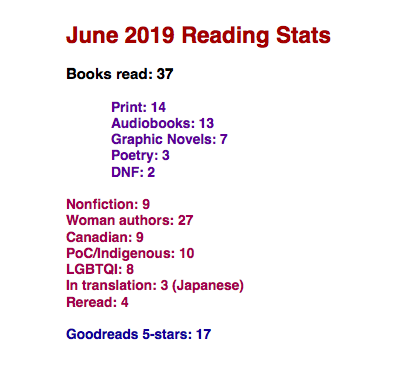 My reading highlights in June:

Rereading isn't common for me, but I read four books for a second time in June. Three of them will be mentioned in a future post, and the fourth is this dark and funny novel, which one of my bookclubs discussed recently. It's a lesbian Alice in Wonderland-ish spoof on the politics of academia, set in a fictional university that could very well be the University of Calgary... if the U of C had malevolent buildings infested with jackrabbits.

Books litter part of the hallway, a pile collected against the wall opposite an open office door. A plant flies out of the door, spatters dirt against the wall, peppering the books.—Fuuuuuuuck, she hears.Then, —Fuckety fuck McFuckintosh O‘Fuckinstein vanFucklington!The office belonged to Jack Froese. One of the creative writers.

Edith tried to get a better chair from the faculty lounge and its collection of unused chairs, but the office administrator, Alice Z, caught Edith pushing the chair in transit between the lounge and her office and chided Edith—Edith needed to fill out the appropriate form, and the new chair should be in her office in six to eight months. Thirteen months ago.

“He‘d come to her with a story burning so hot in his mouth he couldn‘t help but tell it: the house that fell in love with a girl, the girl that starved into a fish.” In this collection of sly stories all set in same village in the English fenland, words can scald, coming of age can be brutal, and a fox is not necessarily just a fox.

I like cocks, she said, but I‘m trying to be bisexual, even if it doesn‘t take. I think, in this day and age, it‘s wrong to be straight.

You have to call a hare a langlugs, he‘d said. And you can‘t ever let them on the boat. Not ever. 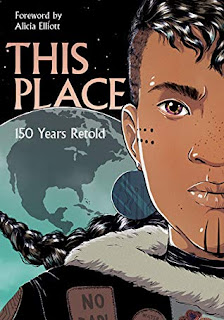 This Place: 150 Years Retold by Kateri Akiwenzie-Damm and others. [graphic novel format]

I was 17 in the holds queue at Edmonton Public Library, so it was a treat to find this graphic novel on shelf at the Banff Centre when I was there recently. It‘s an outstanding collection of stories by talented Indigenous writers like Chelsea Vowel, Richard Van Camp and Katherena Vermette. What an appealing way to present aspects of Canada‘s history that need to be more widely-known! The timeline prefacing each piece is a valuable component, as is the extensive end matter.

As Indigenous people, we all live in a post-apocalyptic world. The world as we knew it ended the moment colonialism started to creep across these lands. —Alicia Elliott, Foreword 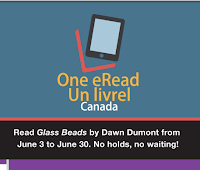 He talked fast, leaping over multiple ideas in a single bound. He had a dozen voices as he acted out characters. He was a one-man conversation band.

Ali Smith is keeping it surreal, which is her special way of keeping it real. Her prose sings a song of hopeless hope: that we can change; that art somehow makes space for us to breathe; that we can stop being afraid of other people who are different in some ways from ourselves. Heartbreaking beauty that resonates with the truth of our times.

What if, the girl says. Instead of saying, this border divides these places. We said, this border unites these places. This border holds together these two really interesting different places. What if we declared border crossings places where, listen, when you crossed them, you yourself became doubly possible.

What do you do there? her mother said when she‘d been a fortnight into the job.I‘m a DCO at one of the IRCs employed by the private security firm SA4A who on behalf of the HO run the Spring, the Field, the Worth, the Valley, the Oak, the Berry, the Garland, the Grove, the Meander, the Wood and one or two others too, she said.Brittany, her mother said. What language are you speaking?

War won‘t stop, the story says. But enmity can. Things can change over time, what looks fixed and pinned and closed in a life can change and open, and what‘s unthinkable and impossible at one time will be easily possible in another.

The Deeper the Water, the Uglier the Fish by Katya Apekina

Fraught family dynamics, art, mental illness, obsession, and a time span from the 1960s to the early 22nd century. My favourite aspect of this novel is the layered, wildly varying viewpoints built from multiple sources including letters, interviews, medical notes, phone conversations, plus the main alternating voices of two sisters. Wowsa.

“Don‘t cry,” she says and closes her eyes. I hadn‘t realized I was crying. Tears have been leaking out of me since we got here, like my face is incontinent. “I‘m not,” I say and wipe them with her hair.

Feast Your Eyes by Myla Goldberg

Told in multiple voices—interviews, letters, journal entries—plus a daughter‘s reminiscences, this novel is uniquely presented as a museum catalog for a posthumous photo exhibit. Lillian Preston and her art are based (in composite form) on real photographers and images; I could clearly imagine them. I was enthralled by the characters and the central question, which is how a woman can be both artist and mother.

After three years of folk songs, hands-on learning, and Quaker meetings, nothing short of electroshock therapy could have prepared me for public junior high.

She knew kids had the built-in cuteness of baby animals but that real childhood was what went on underneath.

The Owl Service by Alan Garner

My YA book club voted this one of their favourite novels out of the hundreds we‘ve read. The group actually read it before 2003, which is when I joined, and I‘ve only this year got around to reading it. Now, I understand their love and admiration for this haunting and compelling novel that brilliantly explores personal relationships and societal structure in the UK. Eerie touches of myth and magic in an atmospheric, realistic setting. (Dodie Smith's I Capture the Castle was another strong contender in our vote for favourites, and my vote for went to Skellig by David Almond. Now that I've read The Owl Service, the two might be tied.)

"Is it a children‘s book? Of course it is, and of course it‘s not only for children. Nowadays, I‘m very glad to say, children‘s literature is taken seriously by academe, and not dismissed as trivial. The Owl Service is one of the books that made that possible and necessary. 50 years after it was first published, we can see that it was always a classic." -From the introduction by Philip Pullman, 2017

Speaking of YA, I was dragging my feet about picking this up because The Hate U Give was so good, and who knocks it out of the park twice in a row? Angie Thomas does, that‘s who. Her characters—Bri and her family and friends—are real people to me. I‘m so glad to know them. Bri, you keep on speaking up for yourself! Outstanding audiobook performance by Bahni Turpin.

“Brianna, why don‘t you go have a seat?” she tells me, which is mom-at-church speak for: “Girl, you better go somewhere before I whup your behind.”

“Connell had just wanted to be normal, to conceal the parts of himself that he found shameful and confusing. It was Marianne who had shown him other things were possible. Life was different after that.” I could identify with these two lost souls and I enjoyed the quiet yet inexorable way their relationship unfolded. We all make mistakes and we are all deserving of grace.

He had thought that being with her would make him feel less lonely, but it only gave his loneliness a new stubborn quality, like it was planted down inside him and impossible to kill.

Denise decided a long time ago that it is acceptable for men to use aggression toward Marianne as a way of expressing themselves. As a child, Marianne resisted, but now she simply detaches, as if it isn‘t of any interest to her, which in a way it isn‘t. Denise considers this a symptom of her daughter‘s frigid and unlovable personality. She believes Marianne lacks warmth, by which she means the ability to beg for love from people who hate her.

Winner of two important LGBTQ awards—Stonewall and Lambda—the primary audience for this first-person tale are readers who are around the same age as the main character, who's 12. Caroline Murphy was abandoned by her mother for unknown reasons, is bullied at school, and falls in love with another girl. To set her even further apart, Caroline can see spirits. A heartfelt and memorable story set in the US Virgin Islands. Audiobook is performed by Haitian actress Krystel Roche. Her emotional range—sometimes defiant, sometimes sorrowful—is perfect for this. 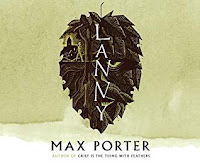 The Only Harmless Great Thing by Brooke Bolander

A brilliant reimagining of history, with humans able to communicate with elephants using sign language. In this slim yet powerful novella, true facts are mashed together in three alternating storylines. It's Radium Girls plus Topsy the elephant (who really was executed in public on Coney Island) plus the problem of how to warn future generations to stay away from toxic nuclear waste sites. Weird and wonderful, especially the parts from an elephant‘s point of view.

But chains can be snapped, O best beloved mooncalf. Sticks can be knocked out of a Man‘s clever hands. And one chain snapping may cause all the rest to trumpet and stomp and shake like a rain-wind coming down the mountain, washing the gully muddy with bright lightning tusks and thunderous song.

Chopstick, a Chinese New Zealander, is looking for existential answers. He‘s turned to Buddhism and pacifism while he recovers from a painful loss but agrees to help his friends carry out a potentially violent act of political protest. Expressive, atmospheric heavy ink artwork. Set in 1990s Auckland, the ragtag band of punk rock anarchists grabbed me by the heart right from the opening pages. Do our lives matter?