The Drunken Botanist by Amy Stewart

Amy Stewart had me craving an alcoholic beverage (or two or three) while I read The Drunken Botanist: The Plants that Create the World's Great Drinks. Stewart is the cofounder of the Garden Rant blog, and author of books like Wicked Plants  and Flower Confidential. When I was 3/4 of the way through the audiobook [Highbridge: 10 hr 15 min], I switched to the print edition. Narrator Coleen Marlo was fine - botanical nomenclature rolled easily off her tongue - but I felt like I wasn't taking it all in. In addition to being more suited to closer study, the print book is also a nice artifact, with decorated page borders and lots of illustrations.

Stewart has gathered heaps of interesting tidbits. Would you have guessed that sorghum "turns up in more cocktails, beers and wines than any other" plant? Chemistry lessons include explaining why some licorice-flavoured spirits like pastis turn milky when water is added, and why oak is used for aging spirits.

Learn about the sex life of corn: "Next time you pull a piece of silk from between your teeth while you're eating a fresh ear of corn, remember that you've just spat out a fallopian tube."

"In about 30 BC, Virgil wrote that citron 'has a persistently wretched taste, but is an excellent remedy against poisons.' The peel was added to wine as a medicinal remedy: it induced vomiting, which might not recommend it as a cocktail ingredient."

"During Prohibition, enterprising California grape growers kept themselves in business by selling 'fruit bricks' - blocks of dried, compressed grapes that were packaged with wine-making yeast. A label warned purchasers not to dissolve the fruit brick in warm water and add the yeast packet, as this would result in fermentation and the creation of alcohol, which was illegal."

Stewart includes growing tips for home gardeners and lots of classic cocktail recipes. In the audiobook, the recipes are preceded by a ting-ting alert, like rapping the rim of a glass. If you want to try any of them, the print edition is the preferable format. Or, you can check out Stewart's Drunken Botanist website for some of them, including instructions for making your own bitters, grenadine from fresh pomegranates, or a champagne mojito.

A Little Book of Sloth by Lucy Cooke 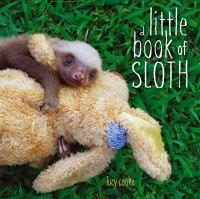 Is there anything more adorable than a baby sloth? At a sanctuary in Costa Rica, Lucy Cooke found cuddle puddles of these cute creatures to feature in A Little Book of Sloth.

There are two kinds there: Bradypus, "the Muppet with the medieval haircut and Mona Lisa smile," and Choloepus, who "look more like a cross between a Wookie and a pig."

They are the most laid-back of animals. They mostly hang out, eat and sleep. Very occasionally, a fight breaks out -- "a very, very slow fight, in which the winner is the last sloth to stay awake."

It isn't all about cute photos and word play; I also learned all kinds of fascinating stuff. Did you know it takes four weeks for a sloth to digest one meal? In the wild, sloths have an invisibility cloak, made of algae and insects, to protect them from predators. Find out more at the Aviarios del Caribe sloth sanctuary website. Also, check out the Sloth Appreciation Society website.

Enjoy sharing this book with children of any age. It's Family Literacy Day today!

A woman has sex with a bear. That's about all I knew about Marian Engel's novel Bear, and I have been meaning to read it for ages. When I spotted its beautiful purple cover at Audreys Books, I couldn't resist taking it home with me.

Originally published in 1976, this 2009 New Canadian Library edition has an afterword by Aritha Van Herk. Bonus! See my review of Tent Peg, Aritha Van Herk's novel in which a woman has a mystical experience with a bear in northern Canada.

Yes, oh yes! And Engel does all of this in 115 pages. It's nuanced and gutsy and utterly unforgettable.

Two lines by poet Dahlia Ravikovitch sum up the internal transformation experienced by the woman in Bear.
"You don't know what's the matter with you."
"it all passes, and you are pure crystal."
(from "Surely You Remember")
Thank you to Shawna Lemay, for posting this poem on her Calm Things blog earlier today.
Posted by Lindy at 9:18 PM No comments:

Jo Harjo, celebrated poet of Creek (Mvskoke) and Cherokee heritage, tells about the many obstacles she faced as a girl and a young woman in Crazy Brave: A Memoir.

"When I lived in Tahlequah I used to walk through town, up and down hills, along the creek, by storefronts filled with items I had no money to buy. I walked when I was hugely pregnant and then after my son was born. It was my time alone. As I walked I could hear my abandoned dreams making a racket in my soul."

It was through artistic expression that Harjo saved herself. She divides her life into four parts: East (direction of beginnings); North (where the difficult teachers live); West (direction of endings); and South (the place of transformation and release). Spirit, mind, heart and body come together as she finds her true path.

The Days of Anna Madrigal by Armistead Maupin

Armistead Maupin has said that The Days of Anna Madrigal is the very last in his Tales of the City series that began in the 1970s. I'm sad that there will be no new adventures forthcoming for his motley crew of mostly queer characters, but realistically, Anna is 92 and frail now. Michael and Brian are in their 60s. It is preferable to end on a high note -- and I'm not talking about the kind induced by mind-altering substances! Although there is some of that, because The Days of Anna Madrigal is true to form. It is also every bit as fabulous as I had hoped. A high note, indeed.

I was fortunate to have access to a digital ARC, courtesy of the publisher.

Overview of My Reading in 2013

I like to look back on my reading stats at the end of each year and Shelfari makes it pretty easy to pull these together. This is how it breaks down for 2013:

Included in the above are:

Only 9 books by local authors? That surprises me. I must make more of an effort this year. I've got a stack by Edmonton authors on my TBR... right next to my bed... so there is no excuse for this poor representation. One local poetry collection that will absolutely, definitely, positively be counted in 2014 is Kissing Keeps Us Afloat. It's my sweetie's second book and it will be published later this year by Frontenac House. An author in my own home; you can't get any more local than that!
Posted by Lindy at 8:14 AM No comments:

Earlier this month, I selected a bunch of audiobooks to download to my iPod in preparation for two weeks in tropical Hawaii. First up was Jonathan Miles' debut novel, Dear American Airlines [Blackstone: 7 hr] performed by Mark Bramhall. It was perfect company for a day of solo travel spent in airports and planes.

"My name is Benjamin R. Ford and I am writing to request a refund in the amount of $362.98. But then, no, scratch that. Refund is too mincy polite, I think, too officious Britishy, a word that walks along the page with the ramrod straightness of someone trying to balance a walnut on his upper ass cheeks. Yet, what am I saying? Words don't have ass cheeks! Dear American Airlines, I am rather demanding a refund in the amount of $362.98. Demanding demanding demanding. In Italian, richiedere. Verlangen in German and ndeoan in the Russki tongue but you doubtless catch my drift."

Enroute from New York to his estranged daughter's lesbian wedding in Los Angeles, Benjamin gets stranded by a storm in the Chicago airport. All flights are cancelled and no hotel rooms are available. Through the night, his rant of a letter continues, revealing the story of his failed life as a husband and father.

Benjamin works as a translator of literary novels. He is a sympathetic character and very, very funny. Bramhall's performance nicely conveys Benjamin's shifting emotions, from bitterness and despair to introspection to hope. Time flew while I listened and flew. Fortunately, I suffered no airline mishaps of my own.

Readalikes: Worst. Person. Ever. (Douglas Coupland); The Revised Fundamentals of Caregiving (Jonathan Evison).
Posted by Lindy at 4:44 PM No comments:

Sixteen-year-old James Whitman struggles with anxiety and with life in an unhappy household after his older sister has been kicked out. His coping strategies include hugging trees, reading Walt Whitman's poetry, and speaking to an imaginary therapist who happens to be a pigeon.

"I do not tell Dr. Bird I want to kill myself sometimes, but she knows. She's up in my head. She perches on the power lines of my thoughts."

Dr Bird's Advice for Sad Poets by Evan Roskos tackles tough subjects with sensitivity and humour. This ultimately uplifting novel is a finalist for the 2014 YALSA Morris Award.

The Silver Button by Bob Graham

The start of a new year is a great time to step back and take a longer look at things, so I've chosen to begin 2014 with a post about a picture book that does exactly that.

The entire drama in The Silver Button by Bob Graham (How to Heal a Broken Wing) takes place over the course of one single minute. While a baby takes his first step, Graham offers glimpses of simultaneous moments happening in a widening circle that begins in the child's house and gradually expands to include an aerial view of the entire city in which he lives. It's a beautiful exercise in gaining perspective and placing ourselves in the context of our larger world.

All ages, from babies to adults.

More picture books that shift the focal point to longer and wider views can be found on my Zoom Out list here.
Posted by Lindy at 7:58 AM No comments: