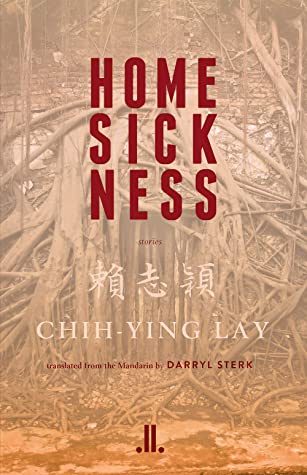 Born in Taipei, Chih-Ying Lay is now a microbiology research scientist in Montreal, as well as a singer and the author of previous short stories and a novel. This is the first time his fiction has been published in English. The author is gay and some of his stories include gay characters. In 2019 (which is after these stories were originally published), Taiwan was the first country in Asia to legalize same-sex marriage.

Music is a common element in these stories. Here's a passage from 'The Seafaring French Horn.'

The sound of the French horn isn't overbearing like the trumpet's. It often struck me, as I listened to you practise, that the sound was just like the shape, convoluted, meandering. It was like liquid light that would fill a room -- a sunbath of notes, so languorous and warm.

Lay introduces every story with an epigraph and I happen to be fond of epigraphs. I like the way they open my brain to the author's possible intentions. Like a corner piece for a jigsaw that I'm about to start, they put me in some sort of frame of mind for what comes next. In this book, they also help to give a sense that Lay's writing exists within a larger context of Asian literature and culture.

The epigraph for 'Epitaph for a Worm' sets its nostalgic mood.

I don't even know how long I've been melancholy. -Wang Anyi

I flagged many passages that struck me, whether for their originality, or vividness, or because they had me looking at something in a new way. COVID-19 has quashed my travel plans, so this part in the title story caught my attention:

At university, you'd read a book by the writer who'd killed himself in the inn. He claimed that people used to be fearful of travel, avoiding it when they could. Leaving the realm of their daily life was a kind of exile. It represented danger, maybe even death. What travellers were most afraid of in the olden days was to be stuck in a forest at night, far from the nearest town, when the sight of any light would turn anyone into the proverbial moth to the flame.

Darryl Sterk lives in Taiwan and is highly regarded as a translator. I heard him speak at the Vancouver Writers Fest last year about his translation of Wu Ming-Yi's The Stolen Bicycle. In the introduction to this collection, he explains Chinese kinship terminology as its used here, particularly in the last three stories, and advises: "If you get lost, check the dramatis personae at the beginning of 'Tomb Raiders.'"

While there are aspects of the stories that clearly belong to Taiwanese culture and landscape, the human motivations will be familiar to anyone. People looking for love and respect. People grieving. People wanting a better life for themselves or their families. People balancing the pull of tradition versus the desire for modern convenience and style. People coming to terms with things that cannot be changed.

Giller chances: MEDIUM HIGH - Not every story is equally strong, but the characters tend to live on beyond the page. I think this collection might be on the periphery of the longlist, so it will depend on the strength of the other contenders whether this makes the list or not.