Audiobooks were my steady companions in July. I even liked one so much that I listened to it twice. See my reading round up highlights below to find out which one that was. As it happens, only one other of my 5-star favourites this month was one that I experienced in audio format. 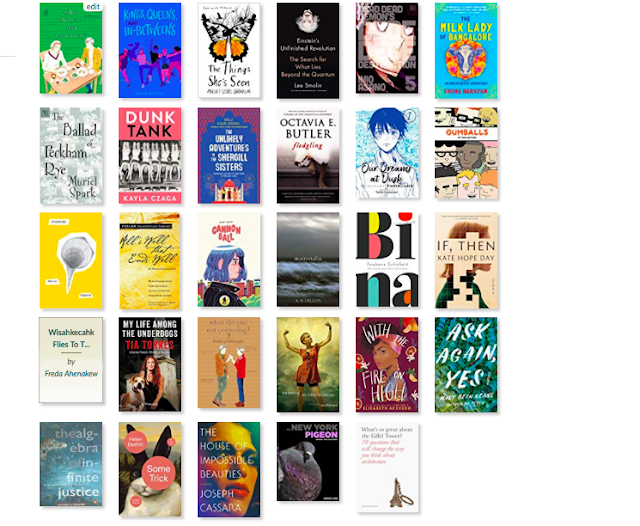 Bina by Ankana Schofield [audiobook narrated by the author; 5 h] 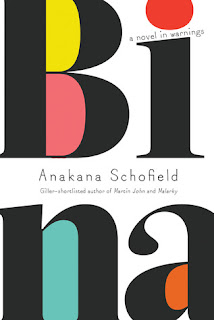 If you like the voices of feisty old women in your fiction, Bina is for you. She warns her readers: “Know this much—know it firm, know it tall, know it wide: I will not shut up.” Her trials include being unable to rid herself of a younger man who started living in her west Ireland home after he crashed into her stone fence, having a crowd of activists camped in her yard, and facing criminal charges for things she didn‘t do. It is seriously funny and I loved it so much I listened to the audiobook twice in a row. Similar books include Drive Your Plow Over the Bones of the Dead by Olga Tokarczuk and Baba Dunja's Last Love by Alina Bronsky.

Eddie was an eruption, a natural disaster. The first human one. Won‘t be the last. Plus, he‘s still going, erupting and disrupting. Like today. He might be gone, but look at what he left in his wake. A wake is an absolutely cheery goodbye. There will be no wake with Eddie except an earthquake. It‘d take an earthquake, maybe, to really be shut of him. Pity you can‘t order them over the phone, underneath specific people.

I started thinking about Canada and what kind of people might be there. I didn‘t like their prime minister. He was flighty. He looked like he‘d take off if he went rolling up an escalator too fast.

Why was it we weren‘t rewarded with children? And did I think it was timing, or was it God‘s decision? And, were some chosen and some not? I said no. I said it was nothing to do with timing, but rather some of us had more sense, and could avoid a bucket of trouble being sloshed into our laps.

Matronalia by A B Dillon

Alberta author Angela Dillon‘s heartbreaking and healing words are addressed to her daughter, expressing regrets, love and hope. Some things passed on from our mothers are best not passed along to the next generation, but it‘s not easy to break the cycle. Honesty, generosity, and clear-eyed examination are some of Dillon‘s tools of precision and understanding.

Go to art when you are lost, my darling. Stand before something that breaks you.

You were bold, and this angered him, so instead of giving you the flowers he had bought for you, he threw them in the garbage. Mark me, buy flowers for yourself at least once a month. Your heart is a rose that belongs to no one but you. Besides, who wants Safeway carnations when behind your ribs peonies flourish and the linnets sing fresh and freely?

I release you from ever having to search my face before you leap. Does the cherry blossom seek permission?

Fresh similes (“the wind sighs like it‘s locked its keys in the car”) and encapsulations of teenage girlhood (“synchronized eye-rolling”) and social media (“Can you feel me tap / on your faces, liking your life? / Do you like your life? I like it / so much I make all the small / hearts underneath you light up.”) make this a delightful, sometimes dark, sometimes funny queer Canadian poetry collection.

I‘m very avant-garde in what I use for bookmarks. That look on your face would do. -Bibliophilia

A long and mesmerizing audiobook that begins with Kepler in the 17th c and ends with Rachel Carson. In between is an interwoven tapestry of the lives of scientists and artists—with a focus on queer women—showing the cross pollination between art and science, the way poetry and music have inspired discoveries and invention. If you love Popova‘s Brain Pickings blog, you will love this too.

The very term ‘pesticide‘ seemed no longer appropriate to Rachel Carson, for designating any organism as a pest to be decimated for the benefit of another organism, the human animal, was an affront to the elemental interconnectedness of nature. She thought ‘biocide‘ better captured the impossibility of violating earth with such poisons without making it unfit for all life. 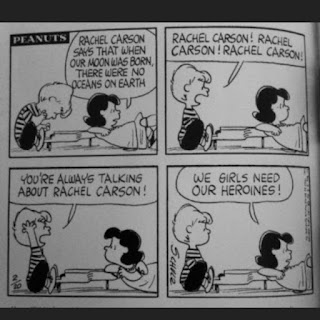 Having received more congratulatory calls from friends after the Peanuts nod than after her National Book Award, Carson joked, “I found that true immortality seems to rest in being included in a comic strip.”

Urania had taken on a different meaning. As sociology and medicine sought to classify identities that diverged from heteronormative sexuality, uranian, coined before homosexual, came to signify a person of a third sex. First, a female psyche in a male body, then more generally those whose attractions differed from the normative standards of their anatomy, or what we today might call queer people. 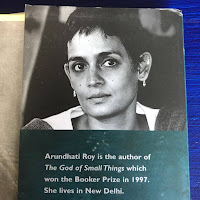 I was waiting for my library hold on Roy‘s new collection of essays, so I decided to reread this one that I own. In her dust jacket photo, Roy (born in 1961) looked young when this collection was published in 2001. The content concerns socio-political issues of two decades ago, but her insights and witty style remain engaging. In the title essay: “President George Bush can no more ‘rid the world of evil-doers‘ than he can stock it with saints.”

I've looked at the table of contents for Roy's new collection, My Seditious Heart, and I see that all six of the essays in The Algebra of Infinite Justice are included, along with another 37 pieces.

Nowadays I‘m introduced as something of a freak myself. I am, apparently, what is known in twenty-first century vernacular as a ‘writer-activist.‘ (Like a sofa-bed.)

The only dream worth having is to dream that you will live while you are alive and die only when you are dead.

Let‘s just say we‘re an ancient people learning to live in a recent nation. The majority of India‘s citizens will not be able to identify its boundaries on a map, or say which language is spoken where or which god is worshipped in what region. To them the idea of India is, at best, a noisy slogan that comes around during wars and elections.

They were on the streets, celebrating India‘s nuclear bomb and simultaneously “condemning Western Culture” by emptying crates of Coke and Pepsi into public drains. I‘m a little baffled by their logic: Coke is Western Culture but the nuclear bomb is an old Indian tradition? Yes, I've heard--the bomb in in the Vedas. It might be, but if you look hard enough, you'll find Coke in the Vedas too. That's the great thing about all religious texts. You can find anything you want in them.

The New York Pigeon: Behind the Feathers by Andrew Garn 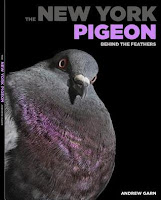 Striking pigeon portraits, taken by photographer Andrew Garn at the Wild Bird Fund rescue centre in NYC, are the stars of this gorgeous, oversized book. There are also chapters on the history and biology of these birds, as well as stories about people who love them.

Because of their loyalty and excellent homing abilities (employing a combination of visual and magnetic cues) pigeons were recruited as messengers early on. In 2500 BC rulers of Sumeria used pigeons to carry news. Gengis Khan established a pigeon post system covering almost one sixth of the world. In the 20th century almost one million pigeons served in the great world wars, saving the lives of thousands of soldiers.

If sightings of pigeons were to become as scarce as hen‘s teeth, bird watchers would travel great distances to seek them out. They would be astonished and covetous when witnessing their great splendour. 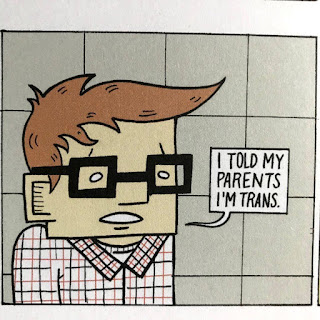 While transgender cartoonist Erin Nations‘ square-head drawing style didn‘t appeal at first glance, I quickly warmed to his sincerity and humour in this autobiographical collection. Included here are short slice-of-life strips and single page comics about his childhood as a triplet, his gender dysphoria and transitioning, his interactions with colleagues and weird customers in his work as a grocery produce manager, and amusing fictional personal ads.

Yoga for Everyone: 50 Poses for Every Type of Body by Dianne Bondy 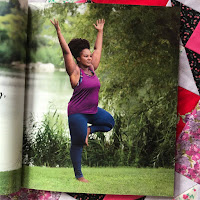 An encouraging body-positive yoga guidebook. 50 poses are illustrated step-by-step with eight diversely-abled models, including a man with no legs, and a very pregnant woman. Support and stability props like blocks, straps, chairs and walls are clearly demonstrated in the variations for each pose. At the end there are a number of sample sequences to help devise a customized practice.

The philosophies behind yoga can foster body positivity by helping you realize that you‘re enough. The central tenets of yoga include nonviolence, contentment, gratitude and self-study. 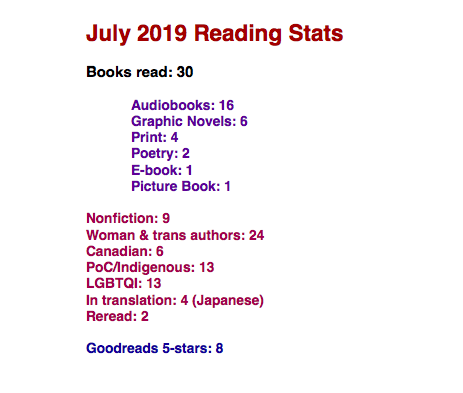