I've read 150 books so far this year. In an earlier post, I compiled my top 10 audiobooks, so this list is just for non-audio, narrowing things down even further by only including adult fiction. Here's a baker's dozen of favourites.

At Hawthorn Time by Melissa Harrison [2015] - A cross between lyric nature writing and fiction. Storytelling that circles back to the opening scene via multiple points of view; broad cast of characters whose lives connect tangentially; references to myth within a realistic setting; close attention to the natural world; changes to a landscape through human activity over time. Beautiful prose. 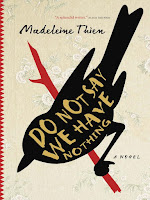 Best Canadian Fiction Combining Elements of Music, Historical Fiction and Contemporary Realism (tie). I'd like to read more in this category, please:

Under the Visible Life by Kim Echlin [2015] - Alternating storylines. Women's lives in Afghanistan, Pakistan, Canada and USA. Mixed ethnicity. Female friendship. Opportunities taken/not taken. Jazz. "I was not lonely with Coltrane and Tyner inside me. I thought, 'This music is what marriage could be, playing solos at the same time and ending up together.'"

Do Not Say We Have Nothing by Madeleine Thein [2016] - "Don't ever try to be only a single thing, an unbroken human being." Three generations of individuals in China's tumultuous 20th century. Eloquent. Classical music. Tragedy. Survival.

One Hundred Days of Rain by Carellin Brooks [2015] - Brief chapters chart inner and outer weather over the period of a messy lesbian break-up. Atmospheric. Made me glad I don't live in Vancouver.

Best Historical Fiction (3-way tie). All three of these expanded my view of women's lives in other places and times:

The Cosmopolitans by Sarah Schulman [2016] - It's a retelling of Honore de Balzac's Cousin Bette, set in 1950s New York City. I tried Cousin Bette and bailed  at the midway point, but that didn't stop me from diving into Schulman's latest novel. I love everything she writes. "Bette liked a novel whose insights into the human mind were not predictable and yet, upon revelation, were stunningly and obviously true." I like that kind of book too. A masterful novel just like this one.

Girl Waits with Gun by Amy Stewart [2015] - A small dispute with an unsavoury businessman escalates into a campaign of terror against a trio of unconventional sisters in 1914 rural New Jersey. Based on historical fact. Danger. Mystery. Comedy.

The Mare by Mary Gaitskill [2015] - A novel about people, not horses. Brief chapters, quick pace. Narrative alternates between Ginger, an Anglo alcoholic in upstate New York, and Velveteen, 11-year-old Brooklynite with a Dominican single mother. Everyone is negotiating emotional minefields.

The Portable Veblen by Elizabeth Mckenzie [2016] - Adorable! Lessons about being true to yourself. Warmth, wackiness and squirrels.

Best Speculative Fiction (tie). Both are blends of fantasy and near-future science fiction, with elements of environmental catastrophe. Both also happen to be steeped in queer sensibilities:

All the Birds in the Sky by Charlie Jane Anders [2016] - A couple of misfits take different paths as they grow up - will it take magic or technology to save the world? Ethics and responsibility. Exuberant. Whimsical. Hopeful. Refreshing.

The Gracekeepers by Kirsty Logan [2015] - Folkloric. Evocative. Quietly enchanting. A drowned world with most living on water and few on islands. A travelling circus. A self-imposed solitary existence. Forgiveness.

American Housewife by Helen Ellis [2016] - Hilarious! Short stories interspersed with other short pieces; reminded me a bit of Rebecca Makkai but Ellis has her own sly style. The things her housewives get up to, you would not believe!
Posted by Lindy at 2:51 PM 2 comments:

Out of the 48 audiobooks I've read so far this year, here are 10 of my favourites.

Overall Favourite:
Lab Girl by Hope Jahren [2016] - Loved this so much. SO MUCH! Natural science research, mental health, friendship. Clever comparisons between plant and human behaviours. "People are like plants, they grow towards the light. I chose science because science gave me what I needed - a home as defined in the most literal sense: a safe place to be." Audiobook is narrated by author and her voice catches with emotion at times. So many layers of wonderful, I could gush about it for a long time.

Best Nonfiction:
Far From the Tree: Parents, Children and the Search for Identity by Andrew Solomon [2012] - Important. Relationships between parents and offspring who are different from each other, i.e. down's syndrome, deaf, gay, prodigies, mentally ill, criminals, or transgender. It's long and it's fascinating and it has won awards. I listened to it and then also read it in print. Narrated by the author.

Best Memoir:
A Year of Yes: How to Dance It Out, Stand in the Sun and Be Your Own Person by Shonda Rhimes [2015] - Ebullient. Warm. Inspirational. Not ever having watched any of the television shows Rhimes created (i.e. Gray's Anatomy), I didn't know what to expect. I was astonished by the power of her story, and the impact is all the greater because the author narrates it herself.

Best Historical Fiction:
Queen of the Night by Alexander Chee [2016] - Enthralling. From the 19th century wild west to the opera stage in Paris, it's an operatic epic starring a woman who uses her wits and talent to survive numerous reversals of fortune. Made me want to hear the music of Puccini, Gounod and Verdi. Narrated by Lisa Flanagan.

Best Speculative Fiction (tie):
The Fireman by Joe Hill [2016] - Thriller. Near future. Dark humour. Plague of human spontaneous combustion. Narrated in the gorgeous voice of Captain Janeway: Kate Mulgrew.
The Regional Office Is Under Attack! by Manuel Gonzales [2016] - It's girls with superpowers trained as assassins, or not that but a secret organization battling evil, or not that exactly but fireballs of love and revenge, or maybe it's not that but something else entirely. Narrated by four excellent performers, including Natasha Soudek.

Best Short Story Collection:
Mothers Tell Your Daughters by Bonnie Jo Campbell [2015] - Rural noir. Gutsy. Gritty. Insightful. Droll. Narrated by the versatile Christina Delaine. Following is an excerpt from 'Daughters of the Animal Kingdom' -
"My students never believe me at first about the love dart, the gypsobelum, that needle-sharp arrow made of calcium or cartilage. A snail or slug will shoot the dart from its body like a hormone-slick porcupine quill to subdue the object of its desire. Sometimes they don't believe me until the quiz, though I've drawn love darts on the board and explained how they can be long enough to pierce a semi-slug's foot, pinning her to the ground. A love dart can take an eye out. In all fifty states, it is against the law for a person to shoot anything resembling a love dart at another person, but there is no such law protecting the daughters of the animal kingdom."

My friend Maureen and I started "Two Bichons Book Club" (because we both have Bichon Frise dogs) in 2009. Up until this year, the only criteria we've had in choosing books for our group has been that they are written by women. In January 2016, we embarked on a special project: A Year of Reading Local. We've been enjoying it very much, and not only because of the Edmonton settings. Some members have commented that they had never read a local author before and had no idea that there was so much talent right here in Edmonton.

January: A Wake for the Dreamland by Laurel Deedrick-Mayne
Friendship. Self-sacrifice. Closeted gays. Pacifism during wartime. Mental health. A moving story about two very young soldiers and the woman who loves them both. The trio of friends are well-drawn and the many details of daily life during the 1930s and '40s make the setting vivid. Special highlight: the author graciously attended our meeting. That's one of the perks of reading local. It was so interesting to hear about her research and it also deepened our appreciation for this wonderful novel.

February: Rumi and the Red Handbag by Shawna Lemay
Reflective. Ethereal. Secrets. Through working together, a friendship develops between two women of different ages and backgrounds. Slim in size, but mighty in content. Women were observed hugging this book during our meeting. We took turns reading aloud our favourite parts. Gorgeous prose!

March: The Unfinished Child by Theresa Shea
Multiple storylines converge in this novel about children with Down syndrome. Changing views about disabilities across decades. Ethical dilemmas. This book provoked so much discussion! Members reported buying copies for friends and colleagues.

April: The Sicilian Wife by Caterina Edwards
Mystery regarding a double fatality car crash is the hook in opening scene. Multiple timelines and settings. Mafia. Girl striving for independence within traditional Sicilian family. Chauvinism faced by female police officers. Dysfunctional families. Most of us liked this quite a bit but the member who read it in ebook found it hard to follow. 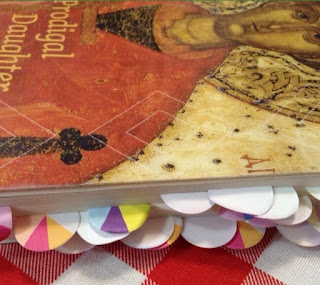 June: Prodigal Daughter: A Journey to Byzantium by Myrna Kostash
Quest to learn why a Greek saint, known for killing Slavs, is popular with Slavic people. Memoir. Travel. Spiritual journey. I think I was the only member who made it all the way through this. Under 300 pages but dense with history and religion. On the plus side, I flagged many passages for discussion. Bonus: we shared a special Ukrainian meal in honour of the book.

October: A Profession of Hope: Farming on the Edge of the Grizzly Trail by Jenna Butler

December: Good to a Fault by Marina Endicott

It has been fun discovering new authors and there are many other titles that we could add to this list. Our project is going so well that we are considering continuing with it next year.

Please look for Two Bichons on Goodreads if you want to see what else we've read over the years.