Highlights from my reading in July include seven novels for adults -- six of them in audiobook format -- plus one collection of short stories. 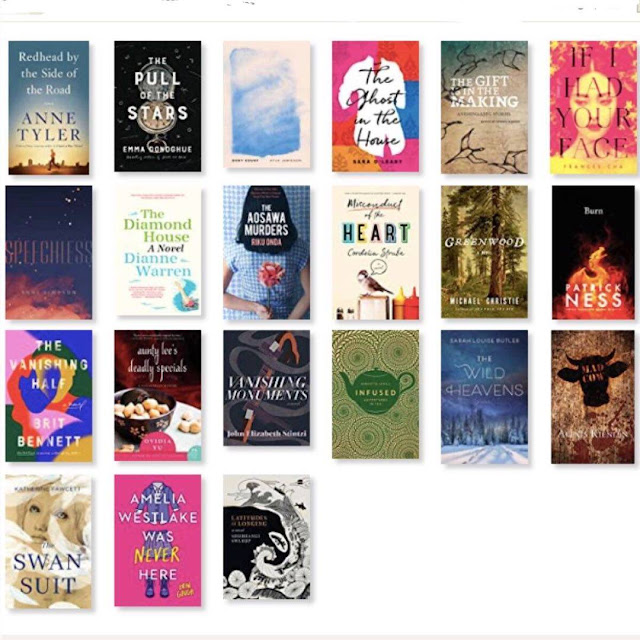 Tomorrow I will announce the start of a new project on my blog and I hope you all will come back to find out more. 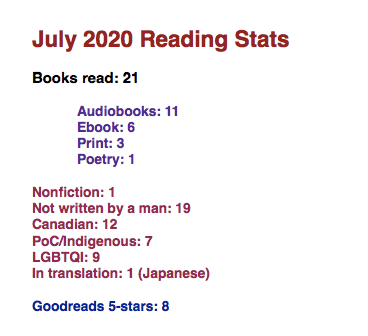 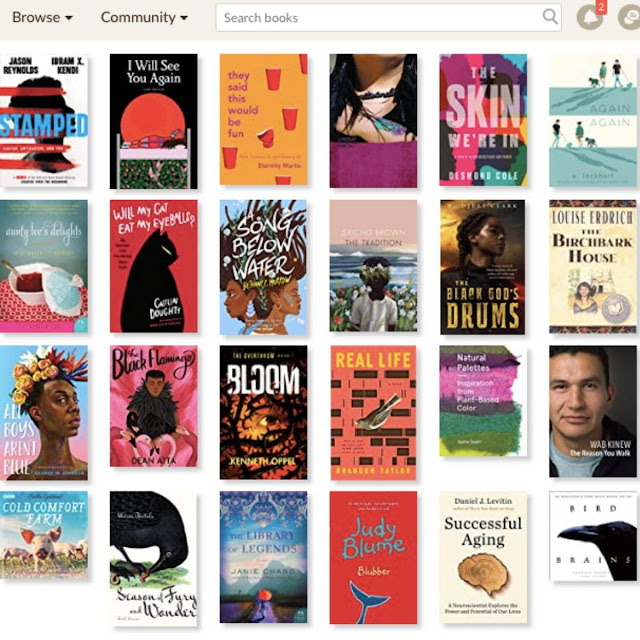 Lots of Canadian content and Black authors in my reading this month. Here are some highlights, starting with three audiobooks that are perfect for family listening.
Stamped: Racism, Antiracism and You by Jason Reynolds and Ibram X Kendi
Audiobook read by the authors
A remix of Ibram X Kendi's National Book Award-winning Stamped from the Beginning
Jason Reynolds, who knows well how to enthrall a young audience, has revised Ibram X Kendi‘s important content. From the 15th century to the present, this connects the past history of racism to understanding how its poison is woven into the fabric of American society today. Outstanding family listening, with peppy music between chapters. (Lest anyone think that anti-black racism is only a problem in the USA, see Desmond Cole's The Skin We're In, further down the list in this post.)
It's not rocket science, it's racism.
----------
We have to be more than audience members sitting comfortably in the stands of morality shouting Wrong! That‘s too easy. Instead we must be players on the field, on the court, in classrooms and communities, trying to do right. Because it takes a whole hand, both hands, to grab hold of hatred, not just a texting thumb and a scrolling index finger.

Will My Cat Eat My Eyeballs? Big Questions from Tiny Mortals About Death by Caitlin Doughty
Audiobook read by the author

Caitlin Doughty, a mortician with an appropriately morbid sense of humour, answers questions from kids. “We can't make death fun, but we can make learning about it fun.” Hello putrefaction! Hello mummies and cryogenically frozen corpsicles! Entertaining AND informative family listening.

He won‘t be diving straight for the human flesh. But a cat has got to eat, and you are the person who feeds him. This is the cat-human compact. Death doesn‘t free you from performing your contractual obligations.

The Birchbark House by Louise Erdrich
Audiobook read by Nicolle Littrell
A 19th century Ojibwa girl‘s childhood: practically a classic (first published in 1999) and often suggested as an alternative to the problematic Little House on the Prairie. I‘ve intended to read this for ages and I‘m glad I found it on Hoopla. Narrator Nicolle Littrell‘s exaggerated voice moderations for the characters isn‘t my favourite style, but it works well for kids, plus the writing itself is appealing. 4 stars for the audiobook; 5 stars for print.
Omakayas tucked her hands behind her head, lay back, closed her eyes and smiled as the song of the white-throated sparrow sank again and again through the air, like a shining needle, and sewed up her broken heart. 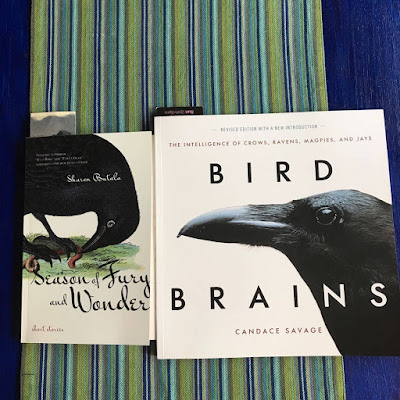 Season of Fury and Wonder: Short Stories by Sharon Butala
All of the short stories in this collection are about old women. It's full of memorable characters and gorgeous prose and so, of course, I loved it. Winner of the City of Calgary WO Mitchell Book Prize.
In the weeks before the raven incident, the Americans, in a rage against ‘the elites,‘ (meaning anyone who knows anything—shades of the Red Guards!) elected a president whose ramblings, as well as being untruthful more often than not, frequently defied reason. I saw him as the purveyor of the original, many-formed mythological Lord of Chaos himself.
----------
Why should the life of an old person be a poor copy of the life of a young one? As if to be an old person was merely to be a failed young one. And then I began to wonder what the life of an old person could be on its own, as if there had never been a young person, with her ceaseless activity, her endless drama from excessive weeping to equally excessive excitement, inside this wrinkled and shapeless exterior.
----------
I have personally discovered over the years that if you constantly stifle your feelings out of concern for what you‘ve been taught is appropriate behaviour, you soon can‘t feel anything at all. Or at least, you have to dig very deep to figure out what your real feelings are, and that mostly this will not seem worth the trouble of doing.

Bird Brains: The Intelligence of Crows, Ravens, Magpies and Jays by Candace Savage
Avian brains are anatomically different from those of mammals—including humans—but birds are nevertheless intelligent creatures. Corvids are especially so, a category which includes crows, ravens, magpies and jays. Natural science makes up the majority of this large-format revised edition (1995, 2018) along with striking full-page photographs. Literary quotations run as sidebars, emphasizing the role corvids have played in human culture. (Note: it's easy to confuse corvid with covid. Just saying.)
…the discovery that young jackdaws had no inborn reaction to predators. They had to learn from their parents' example what to trust and who to fear.

Real Life by Brandon Taylor
Audiobook read by Kevin R Free
An astounding novel taking place over the final weekend of summer before the next year of grad school in the American Midwest. Wallace is a gay Black man dealing with suppressed desire, racism, a feeling of alienation, simmering tensions, fraught friendships, past trauma and recent grief. It‘s pretty intense and feels so real. I love complex characters and this audiobook brought me right into Wallace‘s rudderless heart and mind.
The whole of his history feels dark and cold and far away but it‘s in him, settled down, like blood drying.
----------
“These old houses, he said, “they‘ve got shitty foundations.”

The Tradition by Jericho Brown
In this Pulitzer Prize-winning collection, gay poet Jericho Brown shines a light on traditions of normalizing racism, rape, police violence and other evils. He battles hate with words of love and truth. “The opposite of rape is understanding.” Morning glories, delphiniums, crape myrtles and other flora represent family strength, pride, sorrows and lives cut short. References to Greek myth and use of a hybrid poetic form--the duplex--are just some the ways Brown adds layers of brilliance. Read his poem Bullet Points online here.
I begin with love, hoping to end there.
----------
I love a man I know could dieAnd not by way of illnessAnd not by his own handBut because of the color of that hand and allHis flawless skin.

The Skin We're In: A Year of Black Resistance and Power by Desmond Cole
Audiobook read by the author
A powerful indictment of anti-black racism in Canada. Journalist and activist Desmond Cole moves month by month through 2017, each chapter focusing on an individual case of injustice and placing it within a larger contemporary and historical context. Engaging, eye-opening, infuriating, moving and inspiring. This book is for all Canadians, especially those of us who are white.
This idea that Canada's racial injustices are not as bad as they could be, this notion of Slavery Lite, of Racism Lite, of what my friend calls the "toy version of racism" is a very Canadian way of saying: remember what we could do to you if we wanted to. Passive-aggressive racism is central to Canada's national mythology and identity.

They Said This Would Be Fun: Race, Campus Life, and Growing Up by Eternity Martis
Audiobook read by the author
A memoir that made me laugh, shake my head, and cry. Eternity Martis was one of the few dark-skinned students at Western University when she moved there from Toronto to get an undergraduate degree. Adventures with alcohol, drugs, and casual sex--typical extracurricular activities for students--are more fraught when experienced along with racism and intimate partner violence. Interspersed throughout are tongue-in-cheek Necessary Survival Guides for Token Students.
One of the pleasures of being an avid reader is the interconnectivity between concurrent books. In this case, Eternity Martis uses a term for misogyny faced specifically by Black women, misogynoir, which is also used in the novel A Song Below Water by Bethany C Morrow (see elsewhere in this list). Martis was involved in a production of Ntozake Shange's for colored girls who have considered suicide / when the rainbow is enuf, a choreographed theatre piece created in the 1970s that is mentioned in Stamped, the first book that I wrote about today.
When my mother spoke to people about my background, she never said I was Jamaican, but that my father was. I arrived at the intersection of two brown families from different castes and ethnicities.
...that bodies like mine must be suppressed for being loud, for talking back, for knowing our rights, for not being respectable enough, for not being grateful enough, for not fitting in, for walking late at night, for driving, for breathing.

The Reason You Walk by Wab Kinew
Audiobook read by the author
Wab Kinew performing his own work, including long passages in Anishnaabemowin, is what made this a 5-star, rather than 4-star, audiobook. In print, I would have skipped on to the translations. A moving memoir that affords insight into overcoming challenges—such as racism, addictions, and mental health issues—facing contemporary Indigenous individuals, particularly in the context of fatherhood, spirituality and the legacy of residential schools in Canada.
I happened to be listening to this on the 5th anniversary of the release of the Truth and Reconciliation Commission of Canada‘s final report. I learned from Kinew's memoir that the CBC had issued a memo to all of their staff in early TRCC days, ordering them to use official federal government terminology: to call individuals “former students of residential schools” instead of “residential school survivors.” Wab Kinew fought hard and successfully overturned that policy.

The Black Flamingo by Dean Atta
Audiobook read by the author
“I am the fairy finding my own magic.” This inspiring verse novel—about a mixed-ancestry boy coming of age in London and discovering his love of drag performance—celebrates gender expression and being true to oneself. The audiobook has all the sadness and joy in the poet‘s voice. In the novel, the boy with Greek Cypriot and Black Jamaican heritage sees a black flamingo on the news while visiting family in Cyprus. I looked online and found a photo on the Audubon Society website. I plan to seek out the print edition to see how the poems look on the page and also the illustrations by Anshika Khullar. Stonewall Award-winner.
Be a beautiful thing.Be the moonlight, too.Remember you have the right to be proud.Remember you have the right to be you.
----------
The different ones are often the most strong.

The Song Below Water by Bethany C Morrow
Audiobook read by Andrea Laing and Jennifer Haralson
The addition of magical beings like sirens, sprites and living gargoyles add a whimsical freshness to this moving and powerful YA novel set in contemporary Portland. (“Keep Portland weird!”) The viewpoint alternates between two best friends and the audiobook uses dual narrators to good effect. The underlying issue of misogyny and, in particular, the silencing of Black girls‘ voices, resonates strongly with today‘s reality.
“I‘ve been asked more than a few times whether I agree with the destruction of public property […]. I‘m not sure I‘m allowed to speak. The question is always framed so that bringing up the destruction of human bodies sounds like a deflection.” 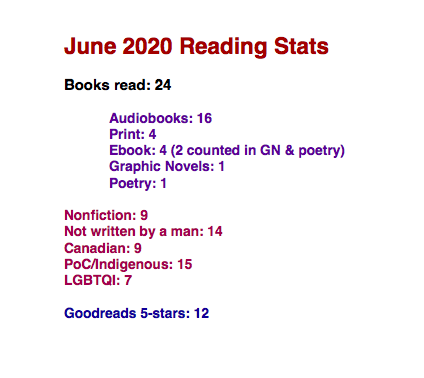