The Invention of Hugo Cabret by Brian Selznick

I was skeptical when I heard that Brian Selznick's The Invention of Hugo Cabret was being made into an audiobook. It is a story that is told only partly through text; pages of wordless illustrations move the action forward. In the audio version, the pictures are translated into sound clips. (Running footsteps, the sound of a crowded railway station, the whistle of a steam engine.) This worked surprisingly well.
The story is set in about 1937. A twelve-year-old orphan named Hugo lives on his own in a train station in Paris, where he tends to the many clocks. His obsession is to restore to working order an automaton that he has found. Caught stealing parts from a toy booth in the station, Hugo's life becomes entwined with that of Georges, a grumpy old toy store owner with a mysterious past.
Silent films from the turn of the century, magicians, a stolen key... a story for listeners of all ages.
Posted by Lindy at 11:42 AM No comments:

Dara Cohen is 17 and she is fat. Her classmates are shocked to learn that Dara was once cute enough to win a beauty pageant - it was actually a talent competition and Dara was 7 at the time. Dara is shocked, in turn, to learn that she is not an only child. Her parents won't talk about her older sister, Rachel, who left home before Dara was born. A series of events leads Dara to realize that she can no longer rely on many things that she once took for granted. When her world crumbles around her, Dara decides to track down her sister, who is living on a lesbian communal farm. It turns out to be one of the best decisions Dara has ever made. Grade 8 - up
Posted by Lindy at 1:13 PM No comments:

The Dreamer by Pam Munoz Ryan and Peter Sis

When he was in his teens, Neftali Reyes chose a pseudonym, Pablo Neruda, in order to avoid confrontation with his father when his work appeared in publications. Neftali was a shy, daydreaming boy, bullied by his father. In this fictionalized biography for children, Pam Munoz Ryan uses narrative prose, magic realism and poetry to evoke Neruda's childhood in Chile. Czech artist Peter Sis contributes surreal illustrations that enhance the feeling of what it was like to grow up awkward around people, yet full of curiosity about the natural world. He was fascinated by beetles, pine cones, clouds... everything except his schoolwork. A summer trip to the seashore should have been heavenly, but Neftali's father had an ulterior motive: to toughen up his weakling son and young daughter. The two children were forced to spend hours in the ocean, struggling to keep from drowning. Neftali managed to defy his father and snuck away to read in the afternoons. I admired his strength of spirit.

The book is a pleasure to read. Scholastic Press 2010 USA edition is printed in green ink on cream paper with wide leading between lines. It can be enjoyed by readers from Grade 4 up to adult. A selection of Neruda's poems appear at the back.
Posted by Lindy at 7:49 AM No comments:

Poet Marilyn Singer invented the reverso, a poem that can be read either from the top down or the bottom up. Changes in punctuation and capitalization make it a completely different poem. For example, the first version of "Bears in the News" starts with this headline: "ASLEEP IN CUB'S BED, / BLONDE / STARTLED BY / BEARS" and the second version ends with this headline: "BEARS STARTLED / BY BLONDE / ASLEEP IN CUB'S BED."

Cheerful illustrations by Canadian artist Josee Masse add to the charm. My favourite reverso is the one about little red riding hood: "In the Hood." Check it out on Seven Impossible Things Before Breakfast website.
Posted by Lindy at 11:52 AM No comments:

Ronit Kruska grows up an Orthodox Jew in London, England. Her father is the rav, the beloved leading rabbi of their community. Ronit attends college in the U.S., gets a job as a financial analyst in New York City and never returns home. Years later, on the occasion of her father’s death, Ronit returns to England.

Esti Kuperman is the same age as Ronit. She is married to Ronit’s cousin, Dovid. We learn early on in the story that there is some kind of connection between Ronit and Esti. I've used GLBTQ as a tag for this post, so I'm sure you can guess the nature of that connection. The revelation of what exactly happened and how the two women handle it, both in the past and in the present, provide dramatic tension. And since the Orthodox community is so tightly knit, the reaction of other people is also an important element to the story. Ronit’s return really stirs things up. Everyone is aware of the dangers of gossip, or lashon hara, which means, literally, an evil tongue. But the temptation is so hard to resist.

Author Naomi Alderman herself grew up in an Orthodox Jewish community in London. Hebrew words and Jewish customs that may be unfamiliar are gracefully illuminated within her writing. For example, the same paragraph that places the opening action at the end of the Yom Kippur fast also lets us know that the day is hot for September. Readers who know in which month Yom Kippur is celebrated are not insulted – and those who do not can now visualize that the death takes place in autumn.

Each chapter is introduced with a quote from Jewish sacred text or prayer and then a brief sermon, presumably in the voice of the rav. The story alternates between third person – a narrator with a focus on Esti and Dovid – and then Ronit’s point of view, told in first person. The shift in voice is marked by a change in font from serif to sans-serif.

Ronit struggles with two aspects central to her identity – being gay and being Jewish. Both of these things are invisible to outsiders. That a lesbian would leave an environment that stifled any difference from the norm is not surprising. I was most intrigued by Esti and her decision to stay.

Disobedience was awarded the Orange Prize for New Writers.
Posted by Lindy at 9:13 AM No comments:

Nina Harrison has been 15 years old for decades. She's the youngest member of the Reformed Vampire Support Group that meets on Tuesday nights in St. Agatha's church. Nina, the narrator of the story, writes exciting Zadia Bloodstone romantic suspense vampire novels. She knows real vampires are nothing like Zadia, however. "Vampires are meant to be so glamorous and powerful, but I'm here to inform you that being a vampire is nothing like that. Not one bit. On the contrary, it's like being stuck indoors with the flu watching daytime television, forever and ever." But when a member of their group is turned to ash, something must be done. The vampires are an intriguing and enterprising bunch, despite their weaknesses. Even Nina is surprised at their own courage. And they need plenty of it to face the challenges ahead of them. Darkly funny and genuinely suspenseful. Grade 6 - up.
Posted by Lindy at 11:52 AM No comments:

An evil scientist steals the ideas from a trio of young inventors but they put their own gadgets to use to foil his dastardly plans. Full-colour comic art and loads of fun and adventure. Grade 4 - 7.
Posted by Lindy at 11:48 AM No comments:

Orphan Maurey was once a student at Fowler College, a prestigious boarding school. When his guardian died, Maurey was demoted to servant at the school, and mistreated because he had the dark looks of a nightwalker. No one suspected, however, that young Maurey was truly a descendant of the feared nightwalkers, the warlock race indigenous to the Island of Eswiland. Humans had killed most of the nightwalkers many years earlier, and the remnants of that powerful race lived beyond the Talverdin mountains.
Unluckily for Maurey, the two rings he keeps around his neck are seen by the wrong people - and his parentage is identified and he is sentenced to be tested in the philosopher's fire. The fire does not harm humans, but it kills nightwalkers. Luckily for Maurey, he is rescued in the nick of time by Annot, the young Baroness of Oakhold. This is the start of their adventures, on the run and headed for the Talverdin mountains.
Canadian author K.V. Johansen's background as a medieval scholar is evident in her world-building, as is her admiration for Tolkein's Lord of the Rings trilogy. Pullman's His Dark Materials also came to mind in the school setting. Johansen, however, moves her story forward quickly without a great deal of description, and so her writing is accessible to younger readers. Recommended for Grade 5 - 9. Book one in The Warlocks of Talverdin series.
Posted by Lindy at 6:02 AM No comments: 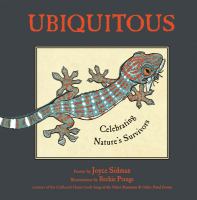 Bacteria, mollusks, lichens, beetles, grasses, squirrels and humans are some of the species that Sidman praises in her poems about creatures that can be found almost everywhere on Earth. A timeline on the inside flaps starts 4.6 billion years ago. Artist Prange folded the timeline many times into itself in order to fit on two pages a scale of 1 centimetre = 1 million years. Throughout the book, each species has a poem on the left page and tidbits of scientific information on the right-hand side. I was amazed to learn that the toe pads of geckos (a 160 million-year-old family) have "thousands of microscopic hairlike projections that cling to surfaces at a molecular level." The mixed media art - linocut prints embellished with colours - work well to tie each two-page spread together. A joyful celebration of our wonderful world. All ages.
Posted by Lindy at 6:45 AM No comments:

The Boy in the Dress by David Walliams

Dennis is twelve. He lives with his dad and his older brother, John. He really misses his mom. Dennis loves soccer and he also loves Vogue magazine (which he keeps hidden under his mattress). He becomes friends with an older girl at school, Lisa, who shares his love of fashion. Lisa encourages Dennis to fulfill his desire to wear dresses... which of course brings enormous consequences.
Illustrations by the incomparable Quentin Blake bring Roald Dahl's timeless stories to mind. I also enjoyed Walliams' humorous asides, where he steps outside of third person narration and speaks directly to the audience. "Dennis did play football for his school and was his team's number one... shooter? Sorry, reader, I must look this up. Ah, striker. Yes, Dennis was his team's number one striker, scoring over a million goals in a year. Excuse me again, reader, I don't know much about football, maybe a million is too much. A thousand? A hundred? Two? Whatever, he scored the most goals."
The story is absolutely charming. It is not a story about sexuality, but rather a heartwarming celebration of difference. Highly recommended for Grade 5 up to adult.
Posted by Lindy at 8:30 PM No comments: