April 2021 Reading Round Up

Out of the 39 books that I read in April, here are a half dozen highlights. Let me know if you've read any of these, or if you discover something here that you'd like to read. 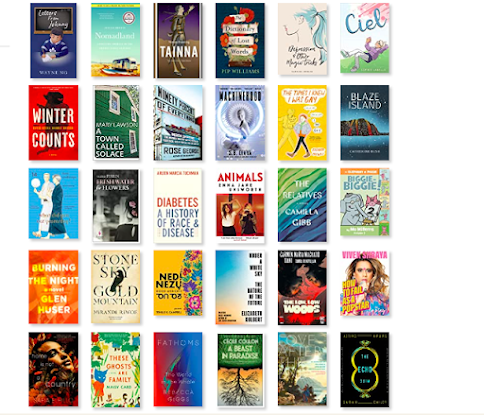 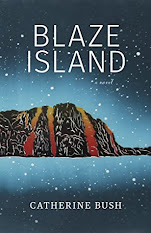 A bracing blend of up-to-the-minute climate fiction and Shakespearean drama, the setting of this Canadian novel is based on Fogo Island, which is off the coast of Newfoundland. A father and his daughter have taken refuge on this island but destructive forces are at play. It opens with a breathtaking storm, the narrative is richly layered, the prose is evocative, and the ending is thought-provoking.

“There are people out there who don‘t believe ice and snow are weather. We are entering times of dangerous weather and that weather is inside us as well as outside.”

…the icebergs glistened, every colour in the spectrum of blue and green: cobalt, turquoise, aquamarine, emerald. From one angle they looked like one thing, from another something else. As the icebergs turned, they revealed arches, hollows, ponds, fissures. It was hard to know how to describe them other than to compare them to other things: this one‘s a castle, no, no, a dragon. 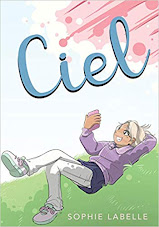 A joyful children's novel about 12-year-old Montrealer Ciel, who is a gender nonbinary trans person. They have a trans girl best friend and there's a trans boy character too: one of the great things about this book is that it shows different ways of being trans and different choices about how that information is shared with others. Canadian author Sophie Labelle is also trans.

When I came out of my mother's stomach, the doctor exclaimed, “It's a boy!” But he didn‘t take the trouble to ask me what I thought, which isn't very nice, especially since I've never really been a boy.

Under a White Sky: The Nature of the Future by Elizabeth Kolbert
Audiobook [6 hr] read by Rebecca Lowman

While not as depressing as her previous works about extinctions and the Anthropocene era, there are still some pretty grim facts in this audiobook. It's “a book about people trying to solve problems created by people trying to solve problems.” Problems such as collapsing ecosystems and climate change might be solved using scary technological solutions like geoengineering aimed at reducing how much sunlight reaches Earth. At least scientists are working on it. By the way, this book dovetails nicely with the novel Blaze Island by Catherine Bush that I mentioned earlier.

Researchers who looked into using solar geoengineering to offset carbon dioxide levels of 560 ppm determined it would change the appearance of the sky: white would become the new blue.

People have fundamentally altered the atmosphere and, yes, this is likely to lead to all sorts of dreadful consequences. But people are ingenious. They come up with crazy, big ideas and sometimes these actually work.

Fathoms: The World in the Whale by Rebecca Giggs

“In their breadth of connectedness, do whales not show us how to be conscious of environments we ourselves cannot see, environments beyond our habitation where crisis is being staged?” A thorough, yet lyrical, look at all aspects of whales and their ocean home, and what humans can learn from them. Award-winning nature writing.

That whale lice, these scuttled smatterings, can document the migration of a single right whale over a million years ago is, you must admit, astounding.

How do you sit with this terrible sad news from the ocean, day after day? […] There is hope. A whale is a wonder not because it is the world‘s biggest animal but because it augments our moral capacity. A whale shows us it is possible to care for that which lies outside our immediate sphere of action, but within our sphere of influence—we care deeply about the whale because it is distant. Because it speaks to us of places we will not go. Because it magnifies the reach of our humanity and reminds us of our collective ability to control ourselves, and of our part in a planetary ecology. Because a whale is a reserve of awe and humility.

This is the incongruity of plastic: it can be so changeable and compliant, so plastic and expendable, yet we‘re told that it will endure beyond our lifetimes. Omnipresent and cheap, no substance less appears to warrant the aura of the eternal. Yet plastic will survive us. Escape us. Plastic is geologic in its original state. Polyvinyl comes from coal. The feedstock of polyethylene is crude oil. Other plastics derive from natural gas and its byproducts. All are fossil fuels. The ocean may be able to assimilate oil spills across a long time, but never plastic.

This historical novel begins in 1886, with the ongoing multi-volume project of the Oxford English Dictionary. Motherless Esme hangs out with her father and the other lexicographers as they work. Her affinity for words, especially those deemed unsuitable for inclusion in the OED, really captured my heart. There was a point where I thought the book might turn a bit sappy for my taste but the strong ending returned me to full admiration.

A vulgar word, well-placed and said with just enough vigour, can express far more than its polite equivalent.

I picked up his book, The Getting of Wisdom. “An Australian novel,” Da had said, “about a bright young woman. Hard to believe a man wrote it.” [Ha! I smiled when I read that because, coincidentally, I just read The Getting of Wisdom a month ago. It's now considered an Australian classic and it was written by a woman named Ethel who used a male pseudonym: Henry Handel Richardson.]

Intricate, highly rewarding contemporary fantasy from New Zealand: this starts out like a crime thriller and then brings in layers of Celtic, Norse, Christian and Arthurian mythology, plus parallel worlds, plus sociopolitical and environmental justice issues. Prepareto be immersed in a long tale with rebel demons, wicked angels, colonial faerie... cleverly relevantto today's concerns.  A fun ride!

They made us believe we were weaklings if we couldn't do everything for ourselves, by ourselves. We all say, “So, I failed,” when mostly we‘ve been failed. They made us afraid of one another, but of themselves they say, “There is no they.”

She could stay. She could start a library, build a small house and fill it with the books she remembered. A real house with ghost books. But when Taryn tried to remember books, the only one that came to mind was her own. Was her own book the only one she‘d ever really needed? 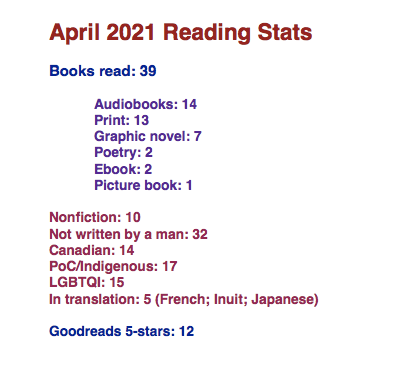