Here the Dark by David Bergen 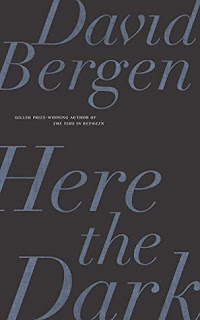 Here the Dark: A Novella and Stories by David Bergen
Biblioasis, March 2020

If this collection of stories hadn't been on the Giller longlist, I would have abandoned it unfinished. I would therefore have missed the best part, the novella at the end, which is the title story. I remain mystified as to its presence among the other Giller prize contenders.

The cover copy claims these are stories of faith and grace. I concur. The narratives taken to arrive at the message of grace grated on me, however. Five out of seven short stories follow a similar pattern: a white guy learns a life lesson from someone different from himself. These teachers are: an Indigenous man, a little black boy, an overweight white woman, a white woman with MS who uses a wheelchair, and a deeply religious white waitress. These characters seem idealized, fetishizing otherness, rather than celebrating diversity. The women are lusty and frank about their sexual desires, thereby helping the men to overcome their alcoholism/emotional unavailability/loneliness.

Perhaps it was loneliness, perhaps need. He did not think, he just said, "Are you sure?"
She said, "I'm thirty-five and you're forty-three and my mother doesn't babysit often and I'm not gonna wait till you divorce your wife and besides I've been thinking about this for the last week, so how about it?"
"That's a great speech," Leo said and he took her into his room and made coffee while Girlie explored the bathroom and looked out the patio doors to the alley. She turned and said, "I love hotel rooms. Our family could never afford them."
"This one's a motel and it's cheap," Leo said.
Girlie made a little noise in her throat. She sat on the bed and took off her boots and socks and stood and slipped out of her jeans. She sat again and bounced on the edge of the bed. Her legs were thin and white. Leo watched. The coffee gurgled through the maker. She shrugged off her tank top. She wasn't wearing a bra and her breasts were small and she bounced again and her chest barely moved and she said, "Come on, Leo Fisher. We'll drink coffee after."
Leo went to her. He said, "I've never done this before."
"You want to stop?"
"No."
"Then, can I ask you something?"
"You can." Her hands were locked at his spine. He could feel her ribs with his own hands.
"Could we pray first?"
"How's that?"
A car passed in the alley. The headlights scraped the curtains and then passed on.
"Come," she said and she kneeled by the bed and Leo kneeled beside her and she said, "Dear Jesus, here I am. This is Girlie. I want to thank you for Leo. I'm so happy that he came into my restaurant and sat at a table where I was serving. It's like you reached down your hand and guided Leo my way. Amazing. I want to say thanks for sex, too, for the joy of horniness, for how I feel right now. Wow. Thank you, Jesus. Amen."
('Leo Fell')

The novella at the end of the book is more nuanced. 'Here the Dark' is from the viewpoint of Lily, a girl coming of age in a strict Mennonite community in Manitoba. She asks too many questions, according to the people around her. "It was dangerous to question and it was dangerous to doubt, for questioning and doubt were forms of sin and sin could only lead to hell."

Lily longs to continue her education but high school is forbidden by her father. On one occasion, she and her father are in a vehicle together when classes let out.

The students fell through the school's doorways. Animals released. Girls standing in groups like tall birds, boys tumbling in the grass like dogs, a few slow and singular turtles, young couples kissing like doves. A conflagration of desire and violence. In her heart.
"I can be true," she said.
It is impossible," her father said. "Ideas are strong and insidious."
"Ours or theirs?"
He looked at her then and his eyes were sad and she was sorry for her words. But only because he had heard them. She said that a tree, in order to thrive, needed a harsh wind.
"That," he said, pointing at the school, "Is a hurricane. We'll hear no more such talk, Lily. Your longings are of the devil. You must forsake them. Ask for guidance. For clarity."

Novels are forbidden too, but Lily reads them anyway, in secret. She navigates her faith and her doubts as she gets older, following her own path. Lily is the most intriguing character portrayal in this collection, so I was dismayed when I realized, at the end, that this story is more about her husband Johan, and the grace bestowed upon him by Lily's devoted love.

The prose is fine, as you can see from the quoted passages. David Bergen won the Giller in 2006 for The Time In Between, which I haven't read. And don't plan to. I fear that the content of his earlier works is like that of his latest collection, and so I have no interest in reading anything more.

Damn! I bought this, but agree that David Bergen can be hit and miss, mostly miss. I should have kept that firmly in mind when I went to purchase the book. Sigh. Oh well.

Penny, maybe you will be among the people who enjoy this book. Naomi mentioned that she liked it. And after you read it, you and Naomi can tell me why I'm wrong.