Are you looking for unusual voice and language that thrills your word-loving soul? Here are four delightfully quirky novels by Irish authors that I've enjoyed recently:

The Liar's Dictionary by Eley Williams 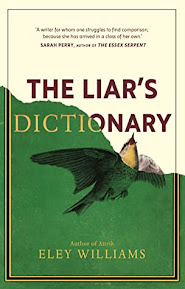 Winceworth and Mallory both work at Swansby‘s New Encyclopaedic Dictionary, but in different eras. In alternating timelines, 1899 and the present, they each experience an eventful (wacky!) day which changes their lives for the better. This novel is playful, witty, warm and wise. Also, it's an ode to vocabulary. Also, it's a lesbian novel.

Whether a dictionary should register or fix the language is often quoted as a qualifier. Register, as if words are like so many delinquent children herded together and counted in a room; fixed, as if only a certain number of children are allowed access to the room, and then the room is filled with cement.

‘Ah, but here‘s a nice one: “widge-wodge (v.) Informal — the alternating kneading of a cat‘s paws upon wool, blankets, laps etc.” A sappy so-and-so, then.‘

‘That‘s incredibly illegal!‘‘It can‘t be incredibly one or the other,‘ David said. He couldn‘t help himself. ‘Something‘s either illegal or not illegal.‘Mansplain (v.) was unlikely to enter any version of the Swansby‘s Encyclopaedic Dictionary.

Winceworth had returned to vexing over why no word had been coined for the specific type of headache he was suffering. The bitter meanness of its fillip, the sludgy electric sense of guilt coupled with its existence as physical retribution for time spent in one‘s cups. A certain lack of memory, as if pain was crowding it out.

Like my handwriting, I was aware that I often looked as though I needed to be tidied away, or ironed, possibly autoclaved. By the time afternoon tugged itself around the clock, both handwriting and I degrade into a big rumpled bundle.

Winceworth blushed, coughed, but words were tumbling out faster than the rhythm of normal speech, almost a splutter, the uncorrected proofs of sentences.

A few minutes later, when calm was restored, the cat Sphinxed on the armrest of a chair with its eyes closed. I gave its spine a nudge with my knuckles. Its body rumbled something about solidarity against my hand. 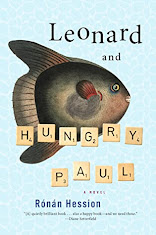 I feel so much love for this funny, understated novel about gentle people. People who are quiet, kind, and almost invisible to their work colleagues. Gentle people who are not in the least bit ordinary. People who give me hope that perhaps the world will be okay, after all, because there are people like this in it.

She met Peter after he had stopped one day to give her directions to an art exhibition and then invited himself along. They fell in love effortlessly. Their initial chemistry broadened into physics and then biology, until they were blessed with Hungry Paul‘s older sister Grace as their first child.

“How do you make sure you get enough protein?” asked Leonard.“Ah, protein. I know how you meat eaters stay awake at night worrying about how much protein vegetarians get. Margaret, who works with me, lives on a diet of cigarettes, popcorn and Diet Coke, and the other week she starts giving me the whole protein speech. I just told her not to worry, that silverback gorillas are vegetarian and they get by okay.

There was a section at the back of the shop full of books about history and other deadly serious subjects. It seemed to be some sort of crèche for older men who had been left there while their wives had gone off shopping elsewhere. 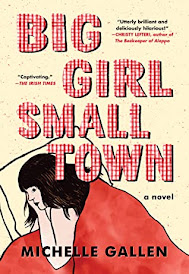 Majella O‘Neill is a large young woman in a small town in Northern Ireland. Look no further if you want matter-of-fact sex-positivity (the opposite of romantic) and an unapologetically fat heroine. Majella seems to be on the autism spectrum, which gives her a unique perspective. Each chapter opens with an entry from Majella's long list of things she doesn't like, or her short list of things she likes.

Thanks go to author Ronan Hession for recommending this book in a booktube conversation with Shawn Mooney. (Hession and Cauvery Madhavan made a whole whack of enticing Irish lit suggestions. Watch it here: Shawn the Book Maniac.)

I adore novels like this, written in the kind of original voice that I won‘t forget. Hearing that voice, peppered with Irish colloquialisms, is even better in audio format.

Sometimes Majella thought that she should condense her whole list of things she wasn‘t keen on into a single item: Other People.

Aghybogey was a town in which there was nowhere to hide, so people hid stuff in plain sight. 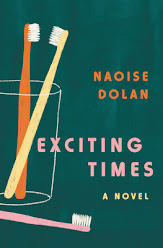 The author, Naoishe Dolan, is queer and has autism. Reading her debut novel has given me a sense of what it's like to be inside the head of someone who is neurologically different from me.

The three toothbrushes on the cover  gave me pause. A love triangle plot, even a bisexual one, doesn't usually appeal. However, as with the other three novels in this post, I was bewitched by the wit and the central character's unique voice. Ava is 22, teaching English in Hong Kong. She didn't fit in when she was growing up in Dublin, but leaving Ireland hasn't alleviated her insecurities. Sharp-tongued Ava is socially awkward, but her life begins to shift when she falls in love.

So, you‘re saying it‘s like London?
I dunno. I‘ve never been.
You‘ve never been to London?
No.
Ever?
Never, I said, pausing long enough to satisfy him that I‘d tried to change this fact about my personal history upon his second query and was very sorry I‘d failed.

He often said he didn‘t meet many people like me, but I didn‘t know if that meant there was necessarily a vacancy for them.

I wondered if Victoria was a real person or three Mitford sisters in a long coat.