If the Tabloids Are True What Are You? by Matthea Harvey

Poetry and images are combined with startling effect in Matthea Harvey's lively collection If the Tabloids Are True What Are You?

Harvey's work is fresh and compelling. Many of the poems are self-contained narratives, and these have the flavour of short stories by authors like George Saunders, Karin Tidbeck and Karen Russell, the kind of tales that are funny, dark and weird.

Some of the poems' titles herald the fun within, like "Michelin Man Possessed by William Shakespeare" and "Using a Hula Hoop Can Get You Abducted by Aliens." One series of poems has images instead of titles. Another series is all images without text: a sort of visual poem consisting of photographs of ice cubes. Each ice block contains something frozen within it.

Each in an entertaining series of mermaid stories is accompanied by a silhouette of a half-woman, half-household object. "The Deadbeat Mermaid," for example, has a grandfather clock in place of a tail/legs. She is flanked by two fish, one with an alarm clock for a head, and one with a pocket watch head. "Between meals, the Deadbeat Mermaid floats on her back and watches the giant sky, stuck on the same stupid cloud channel all day long." 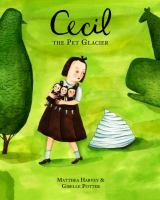 If the Tabloids Are True What Are You? is a fantastic mix of words and art. Harvey is also the author of a quirky children's picture book about a child with a pet glacier. Cecil the Pet Glacier is illustrated by Giselle Potter. Find out more about Harvey on her website here.

I experienced connections between many of Harvey's poems and works by other writers, so I'm going to record some of them here. It may seem contradictory, because If the Tabloids Are True What Are You? is unquestionably unique, but the sheer variety of literary connections also indicates why I found it so appealing.

"The Backyard Mermaid": "The Semplica-Girl Diaries" (in Tenth of December) by George Saunders.

"Cheap Cloning Process Lets You Have Your Own Elvis": "Cloudberry Jam" AND "Miss Nyberg and I" (in Jagannath) by Karin Tidbeck.

"Inside the Glass Factory": "Reeling for the Empire" (in Vampires in the Lemon Grove) by Karen Russell.

"There Is a String Attached to Everything": Ronnie Burkett's style of marionette theatre, in which the puppeteer plays an occasional role.

"In the Hell Between Heavens of Nothingness": "Torching the Dusties" (in Stone Mattress) by Margaret Atwood.

"This Is What the Last Ones Left Us": Motel of the Mysteries by David Macaulay
Posted by Lindy at 12:32 PM