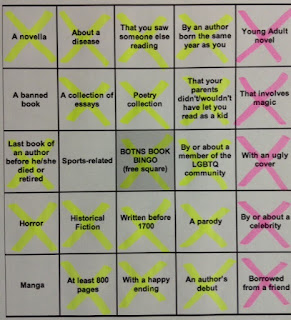 So much reading, so little blogging. I started my first Book Bingo card on the May long weekend and I've finished 84 books since then, so you would think that I'd have completed three cards by now. But the final four squares on this card just haven't matched what's been on my reading pile. The stumper categories have been: a banned book; sports-related; manga; and borrowed from a friend. Thanks to my dear friend Amy, I've completed another line.

Uprooted is an outstanding fantasy novel that combines elements of traditional Russian or Polish fairytales with the freshness of realistic characters. It's told in the voice of Agnieszka, who is not your average village maiden.

"Our Dragon doesn't eat the girls he takes, no matter what stories they tell outside our valley. We hear them sometimes, from travellers passing through. They talk as though we were doing human sacrifice, and he were a real dragon. Of course that's not true: he may be a wizard and immortal, but he's still a man, and our fathers would band together and kill him if he wanted to eat one of us every ten years. He protects us against the Wood, and we're grateful, but not that grateful."

I love that Novik doesn't ignore the reasons why people would choose to remain living in a place that isn't safe. She also reveals the origins of the situation - why it became dangerous in the first place. It's a compelling and satisfying tale.

WITH AN UGLY COVER: Switch by Douglas Davey (with honorable mention to Graffiti Knight by Karen Bass, which I used for the Historical category instead; see previous Book Bingo post.)

YA novels with ugly covers are one of my pet peeves. Even with a good pitch, it takes extra effort to convince a teen to read something with an unattractive cover. Without an advocate promoting them to readers, these books sit on library shelves unread for months and even years. It makes me sad when I'm performing collection maintenance tasks and find books that have never been borrowed. They are nearly always from Canadian publishers. Sigh.

Inside its unfortunate cover, I found Douglas Davey's Switch to be an enjoyable surprise. The title refers to an ambidextrous switch hitter, someone who "plays for both teams." It's a term that's had derogatory connotations for bisexuals, but the portrayal in this case is positive. Switch is a first-person account about a bisexual high school student, set in the 1980s. Circumstances have the protagonist Sheldon coming out to his entire school, an unusual experience for that era. Copious wry footnotes, written as if from a much older version of Sheldon, add a perspective that makes this novel particularly interesting for both teen and adult readers. Just ignore the cover.

I'm grateful to Red Deer Press for providing a review copy of Switch.

BY OR ABOUT A CELEBRITY: The Misadventures of Awkward Black Girl by Issa Rae [Simon and Schuster Audio: 5 hr, 50 min: read by author].
(See previous Book Bingo post.)

BORROWED FROM A FRIEND: Ariel: Poems by Sylvia Plath

Amy Willans (a headliner at the Edmonton Poetry Festival earlier this year) kindly loaned me her copy of Ariel. I've read it through several times and feel like I've barely begun to understand its layers. Poetry is such a potent form of language.

"I am mad, calls the spider, waving its many arms. / And in truth it is terrible, / multiplied in the eyes of the flies." - Totem

If you want to see all of my Book Bingo posts, click here.
Posted by Lindy at 12:09 PM