The Paying Guests by Sarah Waters 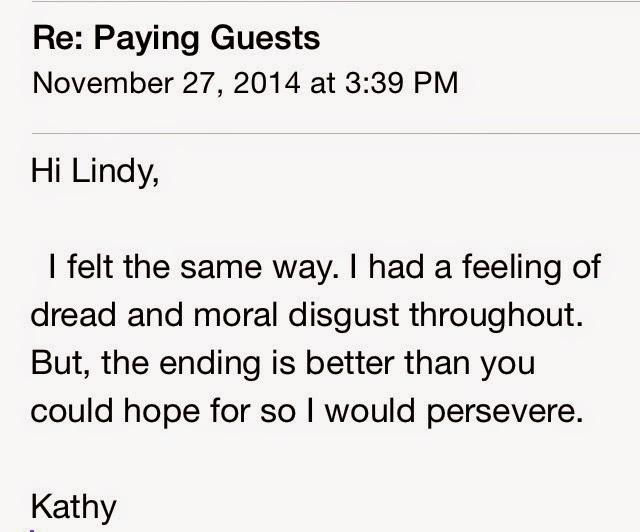 The Paying Guests surprised me because I expected to adore it, which I did at first, and then I nearly gave up on it when I was three-quarters of the way through. I despaired for the protagonists in their situation that seemed hopeless. In his recommendation of The Paying Guests, Slate columnist Simon Doonan wrote: "How can one book be so dismal and so utterly unputdownable?" Well, I was ready to put it down, so I asked a friend who knows my tastes if I should continue. I'm glad I asked, because I'm glad I finished it.

Sarah Waters is a fabulous author and I've read every one of her books. (Affinity is my favourite, but they are all delicious in their own ways.) The atmospheric 1920s London setting and vivid characters drew me immediately into The Paying Guests. Frances Wray and her mother rent rooms in their house to a married couple in order to make ends meet, then Frances begins an affair with the wife.

"The door was open, and she and Lilian were inching towards it. More smiles, more handshakes, more apologies ... And then they were free, going out of the house like swimmers. Or so, anyhow, it seemed to Frances, for directly the door was closed again and the clamour of the party was behind them she lifted her arms, put back her head, feeling unmoored, suspended, lapped about by the liquid blue night."

Waters is a master at getting me into the skin of her people. That moment of leaving the party feels so real - the undercurrent of attraction between the two women, and that open feeling of possibilities.

The pace in the early part is measured, with the feeling of being drawn inexorably toward some fateful event:

"But the end, Frances wanted to say, was impossible to imagine. It was like the idea that one would grow old, when one was thrumming with youth; like the knowledge that one would die, when one felt full to one's fingertips with life."

The ending of the book is not what I had imagined and it is very well done. No spoilers. I will, however, mention something that came up in the New York Times. In their 100 notable books of 2014, The Paying Guests is described as: "Hard times, forbidden love, murder and justice are the themes of this nevertheless comic novel, set in London after World War 1." Comedy is different for everyone, but I didn't notice any of it in this particular book.

Another note: I read up to page 282 (out of 566 pages) in my friend Kathy's copy of The Paying Guests (while I was visiting Vancouver in October), and then I started again from the beginning with the audiobook [Books on Tape: 21.5 hours] narrated by Juliet Stevenson. Either way is good.