On Loving Women by Diane Obomsawin 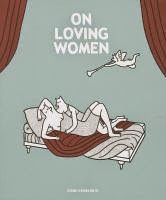 When were you first attracted to other women? In On Loving Women, Diane Obomsawin created comic strip vignettes of her friends' answers to this question. The earliest stages of the coming out process are the poignant focus of the stories: questioning identity; growing self-acceptance; finding lesbian community; and initial sexual experiences.

Obomsawin's artwork is whimsical and appealing. Her anthropomorphic figures have the playfulness of children's book illustrations, while depicting frank lesbian sex scenes. Sort of a cross between the animal/people in Emmanuel Guibert and Marc Boutavant's Ariol, and comics for adults by Jason (I Killed Adolf Hitler, The Left Bank Gang, etc) or Art Speigelman (Maus).

Each woman's story resonated strongly for me, even though they were all different from each other. Coming to terms with one's sexuality is a universal experience for queer individuals. The stories are set in both Canada and France, which serves to emphasize their similarity, because they could be in either country except for when mention is made of specific cities. Compare the two Pride parade floats below and you'll see that not much has changed over the years, either.


Check out more of Obomsawin's delightful films and comics (in French) online here.
Posted by Lindy at 12:28 PM