The Drops of God by Tadashi Agi and Shu Okimoto 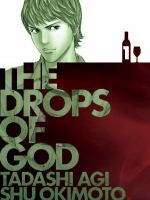 Japanese collaborative team Tadashi Agi and Shu Okimoto have created an engaging manga series that elevates wine to ambrosia status. I found myself wishing I had a glass of French red while reading the first volume of The Drops of God. Apparently I'm not the only one. According to the wine magazine Decanter, The Drops of God is "a comic so influential that a mere wine mention leads to sell-out stocks." It was also winner of a Gourmand World Cookbook Award in 2009.

The three main protagonists are Miyabi Shinohara, a young apprentice sommelier; Shizuku Kanzaki, estranged son of a recently-deceased famous wine critic; and Issei Tomine, adopted as a second son by Yutaka Kanzaki before he died. Whomever of the two brothers solves a wine-related quest will inherit the estate. Issei has the advantage, being a well-known wine critic himself. Shizuku has rejected everything to do with wine, but his father trained him from early childhood to have an outstanding sense of taste and smell. With Miyabi's help, he has a chance in the competition.

The story is a fun mix of romance, problem-solving and general education about wine. Miyabi is such a wine geek that she practically swoons while watching Shizuku decant wine. 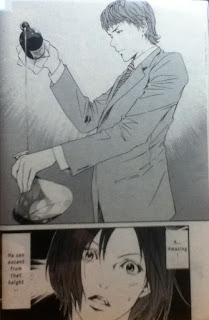 "A... amazing! He can decant from that height... The wine droplets formed a line as straight as a thread of scarlet silk. It danced into the spout. In my experience with wine, I'd never before seen such divine decanting."

A sip of a 1999 Burgundy is enough to transport Miyabi in the first chapter, titled 'The Scent of a Hundred Flowers.' (In the images below, remember to read right to left, Japanese style.) 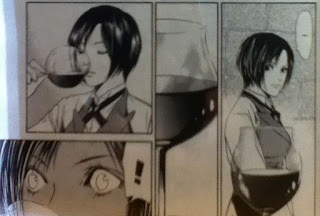 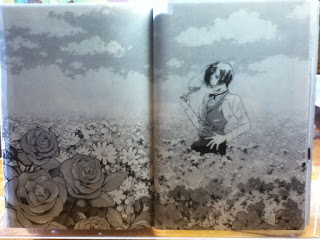 My iPod photos do not do justice to Okimoto's delicate art. See more of her images from this series online here. Her attention to detail on the wine bottle labels is remarkable. All of the wines mentioned are authentic. In the first volume, the focus is on comparing vintages from the Bordeaux and Burgundy regions. I think there are about 5 volumes out in English now and I hope the rest are as good as the first.

I would recommend this even to readers who haven't yet tried manga. It is character-based fiction with a strong plot line and realistic artwork. Have wine and a corkscrew handy.
Posted by Lindy at 7:55 AM