In Marbles, cartoonist Ellen Forney explores the connection between creativity and mental illness. After she is diagnosed as having a bipolar disorder in the early 90s, Forney fears losing her self-identity and also her livelihood if she starts taking lithium or any other medication.

This memoir documents Forney's struggles to find balance when her manic self would prefer to find brilliance. Forney dedicates the book to her mother and her psychiatrist. I found the scenes with her supportive mother, who happens to be a lesbian, especially poignant. Forney writes that they have always been close. "Mom paid for Karen [the psychiatrist] and for half of my rent. I had health insurance but it didn't cover mental health."

Forney is a bisexual artist who is known for her sex-positive journalism in comics format. For example, her collected work in I Love Led Zeppelin includes saucy pieces about twirling nipple tassels, mapping male and female erogenous zones, and "How to Fuck a Woman with your Hands." Forney also created the illustrations in Alexie Sherman's award-winning The Absolutely True Diary of a Part-time Indian. Check out Ellen Forney's website to see her work. 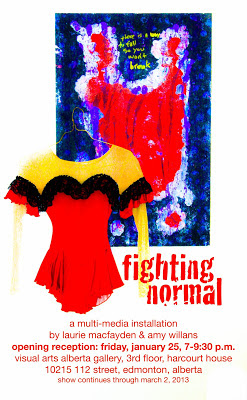 Readalikes -- other works that use graphic novel format to explore the topic of mental health:

Are You My Mother? by Alison Bechdel
Hyperbole and a Half webcomic by Allie Brosh
Bitter Medicine by Clem and Olivier Martini
The Next Day by Paul Peterson, Jason Gilmore and John Porcellino
Swallow Me Whole by Nate Powell
How I Made It to Eighteen by Tracy White

And speaking of Marbles, my sweetie says she feels like she lost hers while putting together fighting normal, an art show about mental health that will run from January 24 to March 2, 2013 in Edmonton at the Visual Arts Alberta gallery. The opening reception is next Friday.

NOTE added Jan 25 2013: A preview of the show was published in the Edmonton Journal: read it here online.