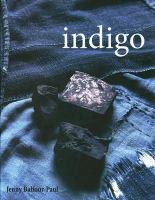 The use of blue dye has a fascinating history as Jenny Balfour-Paul's Indigo demonstrates. Humans have prized the colour and used it to decorate textiles for millenia.

"In theory blue dye (from woad) could have been used as early as around 6000 BC in the Near East, for evidence at the early Neolithic site of Catalhoyuk in southern Anatolia suggests knowledge of dyes at the time." Weavers in Ancient Egypt inserted blue stripes into the borders of plain linen mummy cloths as far back as 2400 BC. Egyptians also used woad overdyed with madder or lichen dye to imitate the shellfish purple that was so highly prized. "Even today people of Oaxaca in Mexico will taste purple-dyed fabric to ensure they are not being palmed off with an indigo and red fake."

Most dyes come from plant materials, but natural purples are created from whelks. "Huge quantities of shellfish had to be killed (about 10,000 to obtain one gram of dye) in order to extract from the tiny hypobranchial glands enough of the photo-sensitive whitish secretion containing the precursor to purple." It's good to know that in Central America today, "the glands of Purpura patula are 'milked' without harming the whelks."

Logwood was discovered in the Americas at the time of the Spanish conquests, but the blues it produced were not colourfast. "It did, however, make a black so valuable in commerce that it was the cause of many conflicts between the Spanish and the English in Central America, and even resulted in the creation of British Honduras (Belize) -- but that is another dyestuff story!" (I want to read that one too.)

More than one kind of plant can be used to create blue dye, but some are superior. The introduction of indigo to Europe from Asia threatened the European woad dye industry. In France, the plutocracy had grown so rich on woad profits, that the king issued an edict in 1609 which sentenced to death anyone found using "the deceitful and injurious dye called inde." "French dyers were not officially free to use imported indigo as they wished until 1737." "At the close of the eighteenth century the magistrates of Nuremberg were still forcing their dyers to swear annually under oath not to use indigo, and, like the French authorities, actually threatened dyers with the death sentence for disobedience. The edict concerned was still on the books at the end of the nineteenth century but had long since been ignored." It was such a valuable commodity before the invention of synthetic dyes that in South Carolina "indigo dyestuff could be exchanged for slaves," pound for pound.

All of this is just in the first quarter of Indigo. Balfour-Paul also writes about indigo's use and cultural role around the world right up to modern times. It's an oversize, almost coffee-table-size book with lots of illustrations and colour photographs. Its appeal extends beyond readers with a special interest in textiles to anyone who enjoys learning about the many ways people manipulate the world around us.
Posted by Lindy at 5:00 PM