House Held Up by Trees by Ted Kooser and Jon Klassen 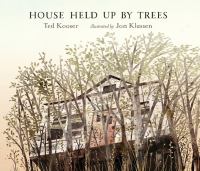 Illustrator Jon Klassen (Cat's Night Out; I Want My Hat Back) has created a powerful and delicate work in collaboration with award-winning poet Ted Kooser. House Held Up by Trees has an unusual storyline for a children's picture book. Set in the quiet beauty of the rural American midwest, it shows the life of a man who was apparently widowed at a young age, and how nature and time erase his efforts to make a lasting mark on the landscape.

The man is always shown at a distance, small against the wide open space where he lives. His preoccupation with maintaining a perfect lawn exhibits his need to be in control. He appears to have little connection with his children, who prefer the woods on the edges of their property to the barren expanse of their yard.

The man's constant battle is with tree seedlings that persist in taking root in his lawn. "This went on year after year, and the children slowly grew up, as children will, and in time became a young man and a young woman, ready to go off into the world." The illustration accompanying this text shows the young people facing the woods, the boy with his cap at his side in a gesture of respect, the girl holding a tree leaf. They do not value the same things as their father.

Klassen's restrained colour palette and liberal use of the palest shades evoke a mood of lamentation while maintaining the feeling of country expansiveness and fresh air. The man's missing spouse isn't mentioned in the text, but we see two chairs near the house, and one of these is occasionally used by the man, never by his children.

Later, when people have abandoned the property, the house is abused by weather and vandals. Trees inevitably take over the yard. "Some of the seeds had sprouted along the foundation, where water ran off the roof and into a deep crack, and these little trees were soon saplings, pressed against the side of the house." Practical details like this show Kooser's awareness and respect for the interplay between the natural world and manmade things. The trees growing against the house eventually lift it from its foundations. The result is otherworldly. Not a treehouse, which is purposefully built for play or refuge, but something else. Something of wonder.

House Held Up by Trees -- it took me a while to notice that there is no article at the start of the title (being as I am so used to omitting them in keyword searching and alphabetical filing). "House" has become an abstract concept here.

Children who live in dysfunctional families may see aspects of their lives reflected here. The tale is recounted without preaching or judgement and the ending is unexpectedly uplifting. It's a multi-layered picture book that can be enjoyed by readers of all ages.

Companion reads: The Little House by Virginia Lee Burton (for a different take on the movement of people from rural to urban life); Jack Pine by Christopher Patton (for another poetic celebration of the power of trees vs. humans); Grandpa Green by Lane Smith (for the contrast of a gardening aesthetic shared by a younger generation, rather than rejected).
Posted by Lindy at 11:53 AM

I personally loved the illustrations and story, but when I presented it at a Read In visit the students were very quiet and had little reaction. Not quite sure if that was introspective thought or disinterest. They were very alive for the puppet/book presentation of “Interrupting Chicken”!

I hope it was introspection, at least on the part of some of the students. How old were they? It was a good idea to pair two completely different types of picture books. Thanks for your perspective. I'd like to try this book in a storytime for adults with developmental disabilities.