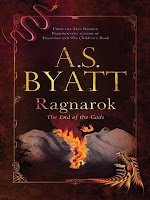 In addition to drawing on the power of the myths themselves, Byatt ups the ante by examining a young reader's relationship to them. Elements of Norse mythology are entwined with the story of a thin child -- perhaps herself -- in wartime Britain. This child was sure that her father would never return from overseas fighting, and consoled herself reading fairytales and mythology. I like the way Byatt distinguishes between the two, pointing out that myths are often haunting puzzles, unlike the narrative satisfaction offered by the foreseeable outcomes in fairy stories.

Both kinds of writings "offered the pleasure to the mind that the unreal offers when it is briefly more real than the visible world can ever be." The horrors of angry gods, giant wolves and sea snakes were an escape from the uncertainties of real life. "What was fearsome, the thin child understood, was to have helpless parents."

A detail from the death of the god Baldur attracted me, since this is something that niggled me in Libba Bray's teen novel Going Bovine. In Bray's book, the Baldur character is pierced and killed by driftwood mistletoe. I simply couldn't picture how a floppy plant like mistletoe could be used this way (nor survive as driftwood). Byatt describes the special preparations taken by the trickster god Loki, who "tore it gently from its foothold in an ash tree. It squirmed a little in his facile fingers. [...] Loki stroked and stroked his fleshy bundle, and pulled, and made hard, and spoke sharp words to it, until he had not a clump but a fine grey pole, still a little luminous, like the round pale fruit, still a curious colour like snakeskin or sharkskin rather than bark, but a pole, which he twirled in his clever hands until it balanced like a javelin and had a fine, fine point like a flint arrow." Isn't that nice and clear? Byatt's prose is always a joy.

Readalikes: Other books in the Canongate Myth series, such as A Short History of Myth by Karen Armstrong, The Penelopiad by Margaret Atwood, Weight by Jeanette Winterson and Girl Meets Boy by Ali Smith.
Posted by Lindy at 12:09 PM