The Next Day by John Porcellino, Paul Peterson & Jason Gilmore 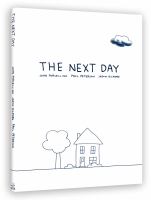 "Every year, nearly one million people die from suicide. What if they had waited just one more day?" Those two sentences break my heart. I've known too many people who have died. The Next Day is based on interviews with Tina, Ryan, Chantel and Jenn, four people who survived near-fatal suicide attempts. Their stories are entwined and told in John Porcellino's minimalist comic strip style. Sometimes I found it hard to tell who was who, but that didn't seem important anyway.

Porcellino's art looks simple but packs an emotional punch. His autobiographical graphic novel, Perfect Example, is the best description I've ever read of how it is possible to feel both aimless and depressed while also feeling good about hanging out with friends. He was an excellent choice for this project, which can also be viewed online in an interactive website.

Jenn has the last words: "Surviving a suicide attempt has to change you. It changes everything about you. Because at some point you have to come to terms with a very simple fact... you are not meant to be dead." This book feels so much more honest than Jay Asher's teen novel about suicide, Thirteen Reasons Why, which did not ring true because the dead narrator sounds so perky. Another thing that I dislike about TRW is that Hannah blames her death on other people's actions. It is vital that we talk about suicide, however, so I'm grateful that the subject is being addressed in popular fiction and graphic novels for young people.

Readalikes: How I Made It to Eighteen by Tracy White and Hello, Cruel World by Kate Bornstein.
Posted by Lindy at 7:45 AM