Welcome to My World by Johnny Weir 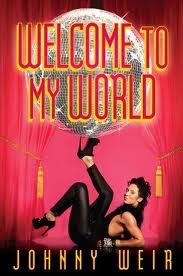 Outside of the figure skating world, everyone knows it's the gayest sport there is. Within the US Figure Skating Association, however, the athletes are expected to be totally masculine... while decked out in spandex and sequins and wearing figure skates. Johnny Weir has never followed the scripts set out by the USFSA.
Johnny Weir received his first pair of new skates in 1994 when he was eleven. They came with a package of skating lessons. Weir didn't like learning how to fall and get up off the ice amidst a horde of other children; he wanted to be jumping and spinning like real skaters - the ones he'd seen on tv. After two hours of lessons, Weir astonished his instructor by taking off on his own, heading for a small opening between two tottering young skaters, and landing an axel jump.

Weir won the World Junior Champion title in 2001 and eventually the US National Championship three years in a row. At the Olympics in Vancouver last year, Weir was at the centre of a media storm after two Quebecois broadcasters said that he needed a gender test because they didn't know if he was a man or a woman. Proud of his individuality, Weir spoke out confidently in support of all the "weirdos" of the world.
In Welcome to My World, Weir shares his deeply private self, a side that is hidden by the flamboyant poses and costumes he puts on for show. It is a moving account of a gay young man growing through an enfant terrible phase and into maturity. After I finished the book, I watched lots of YouTube videos of Weir skating - his interpretation of Lady Gaga's Pokerface is really fun.
Posted by Lindy at 11:06 AM