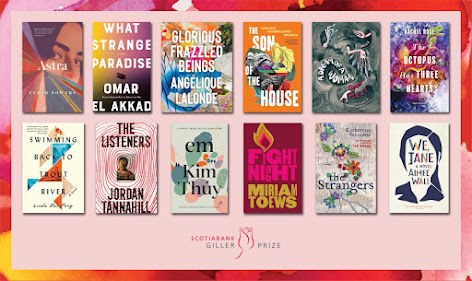 Wow! My first reaction upon seeing the Scotiabank Giller Prize judges' longlist is surprise. Lots of surprises on this list, actually.

It is a challenge to keep up with new Canadian fiction, so I'm happy that there's a Craving Canlit page on the Scotiabank Giller website. My fellow shadow jurors and I have relied on this list of eligible titles to prepare our own longlist predictions. One of the longlisted titles (Swimming Back to Trout River) wasn't on this site, so it escaped my notice entirely.

Three of the titles won't be published until the end of September (A Dream of a Woman; Em; and The Strangers) and one was just released yesterday (Glorious Frazzled Beings). Another was first published in 2019 and then reissued in May 2021 (Son of the House), so I wasn't aware that it fell within the eligibility requirements.

I'm overjoyed to see Fight Night on the list, because I consider it to be a perfect novel.

What Strange Paradise speaks to our shameful times, of refugees treated like unworthy human beings. With the focus on individuals, and particularly on one child refugee, this novel is capable of opening hearts.

Astra highlights our connections to other people, and how perspectives shift depending on time, relationship, and viewpoint. Maria Mutch's Molly Falls to Earth does a similar thing -- and does it even better! -- using prose that sings, so I'm sorry that it isn't on the list as well.

The Listeners speaks to our times also: the splitting of society into two distinct groups, conspiracy theories, our search for community and for something more meaningful than the daily grind. I hadn't predicted that this would make the longlist because I perceived a few flaws, but it's a spellbinding novel and I'm not displeased to see it on the list.

I'm surprised and sad that Sheung-King's You Are Eating and Orange. You Are Naked. didn't make the list. This one has an innovative fragmentary format, beautiful flowing prose, and captures the in-betweenness of having multiple nationalities so well.

I look forward to reading the rest of the longlist and plan to come up with my own shortlist before the official announcement on October 5, 2021.