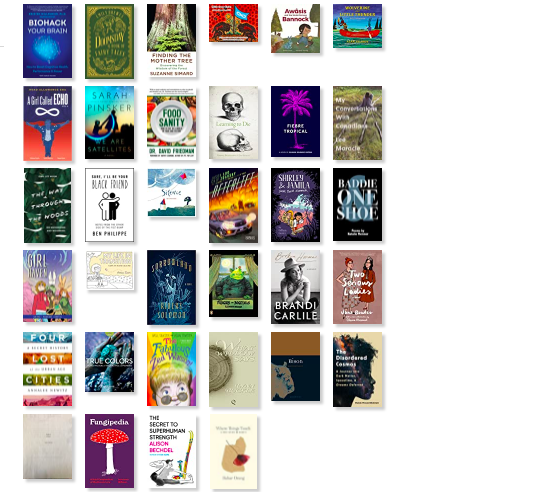 I hope you enjoy these highlights from a few of the books I read in June.

The Secret to Superhuman Strength by Alison Bechdel 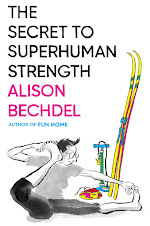 I wouldn‘t have thought it possible but Alison Bechdel‘s art just keeps getting better. In this volume of graphic memoir she brilliantly observes the consumerism surrounding physical fitness, tying in theories of Buddhism, the Romantics and Transcendentalists, and writings of Jack Kerouac, Adrienne Rich etc. In a panel quoting Ralph Waldo Emerson, she describes him as giving a 19th-century TED talk. Each chapter covers a decade in her life, with concurrent fitness trends. The whole thing is funny and smart and I kept recognizing stuff from my own life, which isn‘t surprising since we‘re both lesbians and we're the same age. Full colour artwork too! It's a sign that Bechdel is loosening up: the colouring is done in collaboration with her longtime companion, Holly Rae Taylor.
Note: This was one of the books I recommended to my friend Shawn when I was on his BookTube channel to talk about queer books recently. You can find our conversation here: Lindy Recommends Queer Books 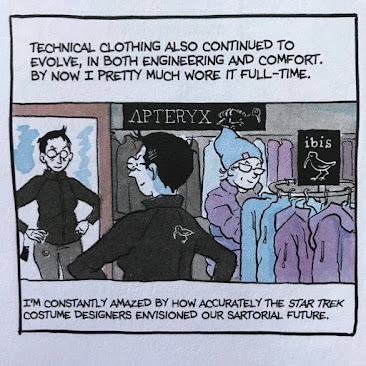 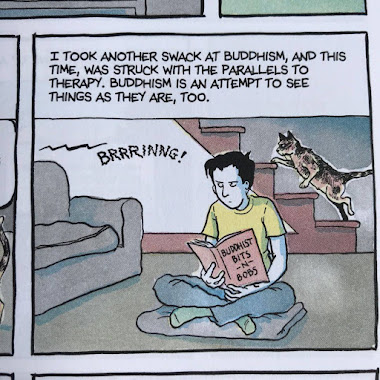 My Life in Transition: A Super Late Bloomer Collection by Julia Kaye 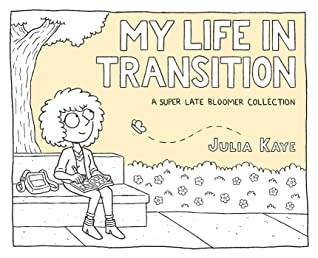 Out trans woman Julia Kaye documents six months of her daily life in comic strips. Her emotional support comes from friends and chosen family. She‘s honest about the ups and downs, yet always manages to see the humour in being human. Sweet and uplifting. 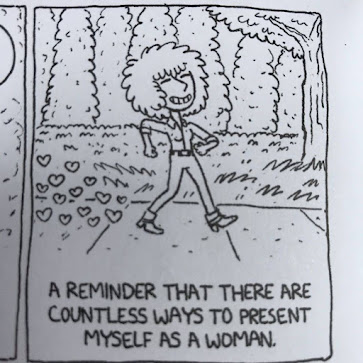 Seeing soft butch women in the media and online makes my heart swell. I see a reflection of part of myself in them I didn‘t realize needed validation. A reminder that there are countless ways to present myself as a woman.

Finding the Mother Tree: Discovering the Wisdom of the Forest by Suzanne Simard
Audiobook [12 hr] read by the author

Forestry was nearly my chosen career when I left high school in 1978, but I decided on libraries instead because I realized I would more likely be involved in clear-cutting than in studying tree ecology. Which is the situation bisexual forestry scientist Suzanne Simard found herself in. Her engaging memoir documents her efforts to have her research results respected by policy makers and thereby save British Columbia forests. I love this library audiobook so much that I've ordered a paper copy from Audreys. 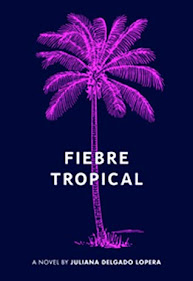 If distinctive voice is your thing, check out this potent blend of Colombian Spanish and English por el amor de Dios! Francisca at 15 has immigrated to Miami with the women in her family. Her loneliness and feverish irreverence is sometimes jaded, sometimes raw with self-discovery, her story both tragic and funny, as she negotiates fanatical Christianity and her own queer coming of age.

Broken Horses by Brandi Carlile
Audiobook [10 hr] read by the author, and includes her music too 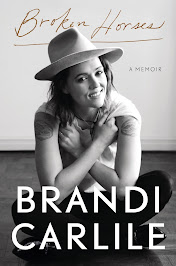 The audiobook edition is a great way to experience Brandi Carlile‘s memoir. She not only reads her words, she even performs two or three songs between chapters. The acoustic music is also compiled like an album at the end of the book. Carlile‘s ability to see grace even in her most difficult times is impressive and inspiring. She was a guest at Calgary's online Wordfest in June and our tickets to her event included a hardcover copy of her book, delivered to our door. Lots of great photos in it!

When you're told your whole life that it's wrong for two women or men to marry, when your homeland agrees, and when you realize that you believe it too, deep within your primitive senses, a reckoning is imperative. It's a process, but it's mandatory, whether you're LGBTQ or not. A person's self-worth is dictated by what inalienable rights are allowed to them. The right to not live your life alone is a big one.

Where Things Touch: A Meditation on Beauty by Bahar Orang 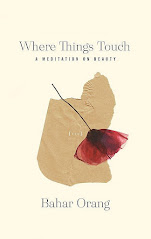 A lovely collection of thoughts about beauty, told in fragments that blur the line between essay and poetry, written by queer Canadian Bahar Orang when she was a medical student.

Beauty is not indulgence, beauty is our right.

Even lovers have tried to impress upon me the importance of reading Hegel or Heidegger, lovers who have declared my sheepish disinterest a symptom of a modern, shallow throng. In one case, I was advised to be permanently suspicious of beauty. How unnerving, then, all the times this same lover remarked that I was beautiful.

There‘s a hypothesis in medicine: reading, a word unconsidered and unqualified, will make you a more empathetic and humane doctor. Except I have known students and scholars who, despite all their literary cunning and writerly prowess, seem to know little about things like compassion. I have known voracious readers who, in reading, simply reinforce their own small-minded beliefs—readers who find, by reading, new logics and arguments for those beliefs.

My head was full of phrases and sayings. What was that lovely one again? A path is made by walking on it.

I am taken instead by the strangeness of flowers, a strangeness familiar and unfamiliar. Flowers can be called queer, their style, their manner of swaying in the half-light, dressing and undressing, spread-eagle, leaning against each other, exhaling, falling apart, coming back together, dying then living. 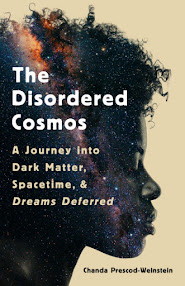 Being a black, Jewish and agender femme particle cosmologist, Chanda Prescod-Weinstein has grappled with all the threads of her history, including misogynoir and colonialism‘s relationship with Indigenous knowledge. Her passion for ethical science makes my heart sing, while her journey to professional status has been harrowing. One of many cool things in this book: the physics of skin—understanding melanin might help us build better, greener technologies. The audiobook performance is good, despite the fact that the narrator mispronounces the author's first name, starting it with a soft 'sh' sound.

Black lives are the stuff of stars and black lives matter. All of them.

Even for all its facts, Western science has struggled with acknowledging a core reality: humans are not the masters of our ecosystem, but rather are dependent on it.

In my view, to be an American president is to helm a sprawling system that does not understand freedom, even as it drones on and on about it. 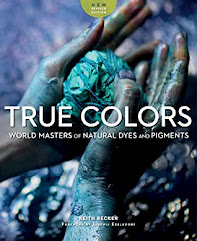 Artists around the world are exploring environmentally-friendly colours in their textiles, paper and pottery. This collection of conversations about culture, history, and colour is fascinating and the photographs are stunning. Many of the people featured in these pages have also been guests on Botanical Colors Feedback Friday videos, which I also recommend:

Just last year, it was revealed that the ever-popular “millennial pink” is actually a shade of the oldest color on earth! More ancient than dinosaurs, this natural pigment was unearthed after a billion years by Australian scientists analyzing shale rock from the Sahara Desert, suddenly giving pink an architectural & cultural dimension. The mines carved out by the very first humans were exploited in order to extract minerals for making color […]

“Natural dyeing is a gateway drug,” Sasha Duerr asserts with humour, meaning that the thrill of seeing textiles soak up fresh plant colour is a memorable sensory experience and, as such, a step along the road to her overall goal of fostering ecoawareness in students, clients, colleagues, friends and family.

What Willow Says by Lynn Buckle 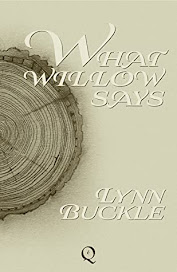 What Willow Says has many similarities to a classic I adore—Tove Jansson‘s The Summer Book, so of course I love this new one too. The similarities include: a warm, intense relationship between artist grandmother and exuberant granddaughter; told in vignettes; the mood is sometimes melancholic with grief over the death of the child‘s parent(s), sometimes serene, and often buoyant with discovery connected to the natural world. What Willow Says is set in Ireland, the orphaned child is deaf and the prose sings with poetic conventions. (I'm grateful to the publisher Epoque Press for access to a review copy.)

She already knows the slow, steadfast way an oak grows or how eucalyptus rushes to the sky in the fight for light, how aspen quivers, and ivy gropes.

And I swear to god she makes up some sign which both intonates, and says, that the pines are brushing their sorrows against one another. No spoken words detonate feelings quite as deeply as these movements of hers. I have tried convincing fellow writers to watch the beauty of sign language poets. She surpasses them in signing her loss. She signs the trees singing.

Shirley and Jamila Save Their Summer by Gillian Goertz 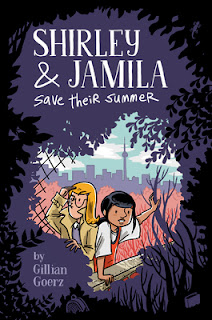 A fun contemporary graphic novel about two 10-year-old girls who, upon first meeting, form a pact to their mutual benefit in order to avoid spending their summer at camps they‘re not interested in. Instead, they become friends and solve mysteries. Colourful art with expressive faces and a diverse cast that reflects their home city of Toronto. This is the first volume of a projected series. 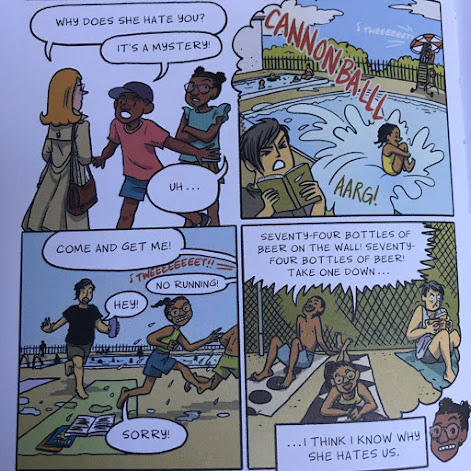 Fungipedia: A Brief Compendium of Mushroom Lore by Lawrence Millman 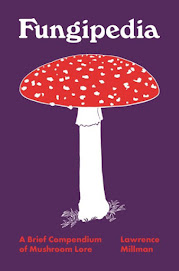 Have you been longing to become more conversant in mycological facts and lore? No? It doesn‘t matter! This is the funny and informative compendium you didn‘t know you were missing! You‘ll learn that a mushroom stem is called a stipe and that a sloth‘s hairs have grooves that serve as hydroponic gardens for fungi! And so much more! Amaze and amuse your friends with trivia about mushroom sex, deification of fungi and poisonings!

Fairy rings can be quite venerable. Purple-spored puffballs (Calvatia cyathiformis) can form fairy rings that survive for 400 years or more. One particularly large fairy ring near Stonehenge in southern England is estimated to be at least 1,000 years old.

Also, lysergic acid diethylamide, otherwise known as LSD, is an ergot derivative accidentally discovered in 1943 by Swiss chemist Albert Hofmann when he was investigating the pharmaceutical properties of ergot.

Upon seeing a specimen of Phallus impudicus, Thoreau wrote in his journal: “Pray what was Nature thinking of when she made this? She almost puts herself on a level with those who draw in privies.”

Recently, the wood of several ordinary violins was inoculated with Xylaria polymorpha mycelia, and the sound ended up very close to that of Strativarius violins.

A typical mushroom in the prime of its life might produce upward of 30,000 spores per second. Certain spores can remain viable for 100+ years, so when they walk into a bar, they can simply sit down on a stool and wait, then wait some more, until a compatible mating type also walks in.

The mating types of spores are sometimes called genders. To ensure their survival, most fungi have many genders, but the split gill (Schizophyllum commune) takes the proverbial cake by having 28,000 genders.

At Le Pré-Saint-Gervais outside Paris, German composer Johann Schobert picked a batch of mushrooms and brought them to a restaurant so the chef could cook them. “Poisonous,” the chef said. Schobert left in a huff and brought them to another restaurant, whose chef said the same thing. Whereupon Schobert went home and cooked the mushrooms himself … with the result that he, his wife, and all but one of his children departed this world. 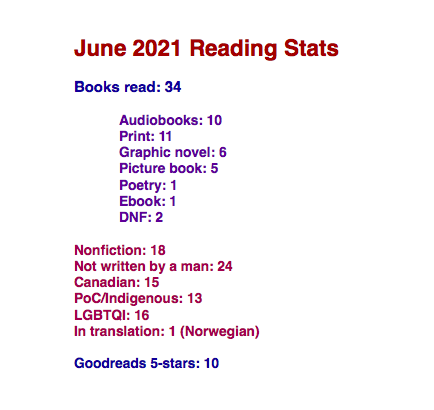