The Heavy Bear by Tim Bowling

"After making a press of dark roast, I slipped in the DVD and watched The Railrodder. Then I watched Buster Keaton Rides Again, the documentary shot simultaneously with the filming of The Railroader, which is even more haunting in its depiction of a dying legend and a vanishing nation. And I stepped straight out of linear time - just like Keaton as the projectionist in his classic 1924 film Sherlock Jr., who leaves his own body and enters the story he is showing on the screen - and arrived in the past where the light animates the dead and every shadow is a snarl of tape on the cutting-room floor."

Just like Keaton does, as the protagonist in the silent film Sherlock Jr., Bowling seems to step out of his life into a dream. The protagonist in Tim Bowling's latest book happens to be named Tim Bowling. He happens to be a writer living in Edmonton (where I also happen to live). He has a family and sometimes must make ends meet by taking teaching jobs... just like the real Tim Bowling. However, there are other elements that make it immediately clear that this is fiction. Bowling wakes up really early (or is he still dreaming?) on the morning that he is to begin teaching an English class. He cannot bear the thought of surmounting his introversion and standing in front of his students. What to do? What to do? His companions during his day-long existential crisis include the ghost of Buster Keaton and a large, but invisible, bear-poet. 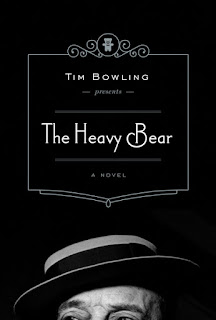 "I had an imaginary bear who wept, a silent film ghost who remained true to silence, and my own sense of reality, which might either have been slipping away or speeding straight at me like an express train, depending on how you define reality. One fact was clear enough: the more I taught, the less I would write. And if I did not write, what would keep me out of a straitjacket? Yet what I wanted to write didn't pay me enough to support a family of five."

Bowling is someone best described as a writer's writer, and, with phrases like: "I pointed my heavy compass to campus," it's evident how much he enjoys playing with words.

"I checked my watch. It was almost one o'clock. I checked my pulse. It was still quick, but not alarmingly so. I checked my mood. It had sped through a few phases since the morning, and now had slid down toward where it started. Much had happened, but little had changed."

Tim's chance encounters on the streets of Edmonton lead him to an unlikely source of wealth and unwitting involvement in criminal activity. There's enough humour and narrative action to keep the storyline compelling even as it meanders through thoughtful interludes.

"I looked around at the cages and tanks. There were at least a dozen, and all were grimy. Some sort of a large lizard - perhaps a Komodo dragon - blinked up at me with its bulbous, Peter Lorre eyes. The sandpaper of its skin seemed to cast sparks against being. I could relate, too much so."

"For some strange reason, the depressing shop comforted me. Despite the filth and gloom of the place, the presence of other species, even these poor specimens, always lifted my spirits. I remembered my Whitman:

I think I could turn and live with animals: they are so placid and self-contain'd;
I stand and look at them long and long.
They do not sweat and whine about their condition;
They do not lie awake in the dark and weep for their sins;
They do not make me sick discussing their duty to God:
Not one is dissatisfied - not one is demented with the mania of owning things;
Not one kneels to another, nor to his kind that lived thousands of years ago;
Not one is respectable or unhappy over the whole earth.

It's a bizarre, twenty-first-century form of comfort, but you hear it from time to time: the earth and its life existed before us, and it will survive us. Even when you don't hear someone articulate the thought, you can feel it."

The Heavy Bear is an inventive, introspective and thoroughly rewarding novel.

Thank you to publisher Wolsak and Wynn for sending me a review copy.
Posted by Lindy at 5:45 PM