In July last year, I started doing a monthly summary of my reading, which I then posted on my Litsy account. I've decided to start sharing it here too. 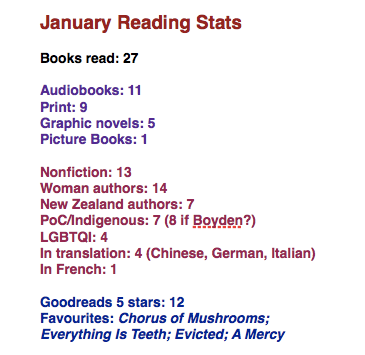 I spent over two weeks in New Zealand last month, which is reflected in the number of authors from that country.

There was a side trip to Australia during that time as well, which adds up to many hours in airplanes. I had expected I would have listened to more than eleven audiobooks, because that's how I prefer to pass the time when flying, but I guess it's because some of these were really long: I listened to 118 hours worth of audiobooks in January.

If you are looking for an outstanding audiobook, I gave 5 stars to three of them this month: 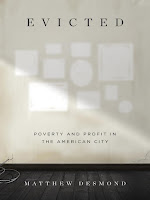 Evicted: Poverty and Profit in the American City (Matthew Desmond) - [Narrated by Scott Aiello; 11h 27m]
I first heard about this about a year ago from Michael Kindness on the Books on the Nightstand podcast and have been wanting to read it ever since. It's such an important, eye-opening book, and so full of heart. Please read it! I guarantee you will not feel the same way about poverty afterwards.

The Hidden Life of Trees: What They Feel, How They Communicate: Discoveries from a Secret World (Peter Wohlleben) - [Narrated by Mike Grady; 7h 33m; translation from German]
Quirky and fascinating. Scientific fact and fanciful musings. Some of the new research about how trees communicate with each other was also in Hope Larson's fabulous memoir, Lab Girl, one of my favourite audiobooks of 2016.

Claire DeWitt and the Bohemian Highway (Sara Gran) - [Narrated by Carol Monda; 9 h]
"With each day that passed something ugly was growing in me. I watched it grow. I fed it cocaine. I loved it and held onto it, kept it alive."
Gritty hipster noir set in San Francisco that's more about the deeply-troubled bisexual detective than the solving of her cases. Claire strives to help every underdog except herself, disregarding her own safety and wellbeing. Start with book 1, Claire DeWitt and the City of the Dead, then this. Then pray that Gran will write a third in the series.

The Three-Body Problem (Cixin Liu) - [Narrated by Luke Daniels; 13h 26 m; translation from Chinese by Ken Liu]
At about the 3-hour mark, I considered abandoning this when I got a little bored. Then I got swept up in its epic scope. Wow. Harsh lives in mid-20th century China and folks who think maybe it would be a good idea for aliens to wipe out human civilization. Thought-provoking science fiction. The Remembrance of Earth's Past trilogy, Book 1.

The Reader (Traci Chee) - [Narrated by Kim Mai Guest; 12h 31m]
Fantasy adventure in a world where nobody reads. Except there is one magical book. Three storylines. Strong roles for women, including pirates and assassins. Love that the young people reject roles laid out for them and choose their own paths. Entertaining! Sea of Ink and Gold, Book 1.

Becoming Fluent: How Cognitive Science Can Help Adults Learn a Foreign Language (Richard Roberts and Roger Kreuz) - [Narrated by PJ Ochlan; 5h 34m]
I love learning languages and am currently refreshing my knowledge of Slovak. This excellent audiobook has reinforced what I already know works for me: a) learn spoken and written at the same time; b) short, daily time blocks of learning; c) practice remembering and using vocabulary while handling daily objects instead of labelling everything in the house. What I need to add: more visuals of people speaking the language. A cool thing I learned about was the McGurk effect. Watch this video and see how your brain does interesting things when sight and sound don't add up: Seeing Is Believing.

SPQR: A History of Ancient Rome (Mary Beard) - [Narrated by Phyllida Nash; 18h 30m]
"Many of our most fundamental assumptions about power, citizenship, political violence, empire, luxury and beauty have been formed and tested in dialogue with the Romans and their writing"
"The only genre of mainstream Roman literature that can claim an origin outside of the elite is the animal fable."
"A crucial aspect of any organized community is its ability to structure time. [...] The modern western calendar remains a direct descendant of this early Roman version, as the names we give our months show."
"Adoption in Rome had never been principally a measure for a childless couple to create a family. If anyone just wanted a baby, they could easily find one on a rubbish dump."
An engaging, often surprising, thousand-year chunk of Roman history. Beard makes many connections between ancient history and our modern era, like: "Then, as now, the easiest tactic for a government trying to reduce the pension bill was to raise the pension age."

Born to Run (Bruce Springsteen) - [Narrated by the author; 18h 16m]
"People don't come to rock shows to learn something, they come to be reminded of something they already know and feel deep down in their gut: that when the world is at its best, when we are at our best, when life feels fullest, then 1+1=3. It's the essential equation of love, art, rock 'n roll, and rock 'n roll bands."
I considered bailing on this early on because I was annoyed by Springsteen's overuse of cliche. For example, his father is such a misanthrope that he has no friends, so he "pours his heart out" to his teenaged son, because Bruce is "the only game in town." I'm glad that I stayed with it, however, because he's had an amazing life. I was particularly interested in what he shared about his own and his father's struggles with mental illness.
"My dad would explain to me that love songs on the radio were part of a government plot to get you to marry and pay taxes."

On Trails (Robert Moor) - [Narrated by Jason Grasl; 10h 38m]
"On wild land, wild thoughts can flourish. There, we can feel all the ragged edges of what we do not know and we can make room for other living things to live differently. We must learn to infuse this sense of the wild back into the human landscape. For instance, to see even the trees in our backyards as wild things, and to reframe our understanding of the wilderness so that it can contain us within it."
Environmental journalism, contemplative and wide-ranging. Understanding how humans interact with landscape and how social organization relies on physical ways to connect, from ancient pathways to contemporary long-distance hiking to Internet networks. Fascinating. 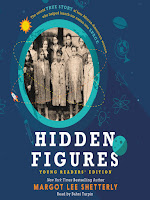 Hidden Figures Young Readers' Edition (Margot Lee Shetterly) - [Narrated by Bahni Turpin; 4h 11m]
Stories of African American women who have worked in aeronautical sciences since the 50s. Inspiring and enlightening. Suitable for the whole family, if you are planning a car trip.
Posted by Lindy at 3:00 PM