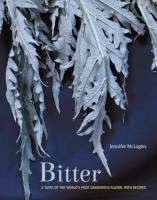 I appreciate the taste of bitterness and so I was excited when I first heard about Bitter: A Taste of the World's Most Dangerous Flavor, with Recipes when Jennifer McLagan was interviewed by Shelagh Rogers on The Next Chapter. (You can hear the episode online here.)

I've since read it cover to cover and tried some of the recipes. The Tea-infused Prunes are already a favourite. (Earl Grey tea and orange peel--so simple and so good.) I combined two different recipes, Grapefruit Tart and Grapefruit Curd, to make lovely dessert tartlets for guests at Easter. Some of the other recipes I'd like to try include: Bitter Greens Ravioli, Beer Soup, and Homemade Tonic Water.

McLagan's vegetable recipes often include lard, duck fat, ham, anchovies or other such ingredients that don't come into my vegetarian house. It doesn't matter, because I'm used to making substitutions. In fact, I often go off onto such tangents that the original recipe is unrecognizable. Today I made dandelion and smoked cheese quesadillas. They were totally my own creation, but inspired in general by McLagan's recipes for bitter greens.

Bitter is the kind of cookbook I love to read because it's full of fascinating information. For example:

The only complaint I have is that most of the information pages are laid out in white font on a celadon green background, which doesn't provide enough contrast to be easily read. The photo pages are plentiful and drop-dead gorgeous, especially the ones with plant materials displayed against a dark backdrop.

There are lots of quotes from other sources, such as:
The introductory notes with each recipe are just great:
McLagan's information about phytochemicals reminded me about another food book I like: Eating on the Wild Side by Jo Robinson.