The Strange Library by Haruki Murakami

I'm comparing two editions of The Strange Library by Haruki Murakami. I received the UK (Harvill Secker) edition as a Christmas gift and I borrowed the North American (Knopf) edition from the public library. The text content is the same, translated by Ted Goosen, but the book designs are very different.

The tale begins when, on a whim, a boy on his way home from school asks at the public library for books about tax collection in the Ottoman empire. Then he is held captive in a labyrinth while forced to memorize them. A man in a sheepskin and a mute girl look after him. The story unfolds like a dream--or possibly a nightmare.


"But, hey, this kind of thing's going on in libraries everywhere, you know. More or less, that is."
This news staggered me. "In libraries everywhere?" I stammered.
"If all they did was lend out knowledge for free, what would the payoff be for them?"
"But that doesn't give them the right to saw off the tops of people's heads and eat their brains. Don't you think that's going a bit too far?" 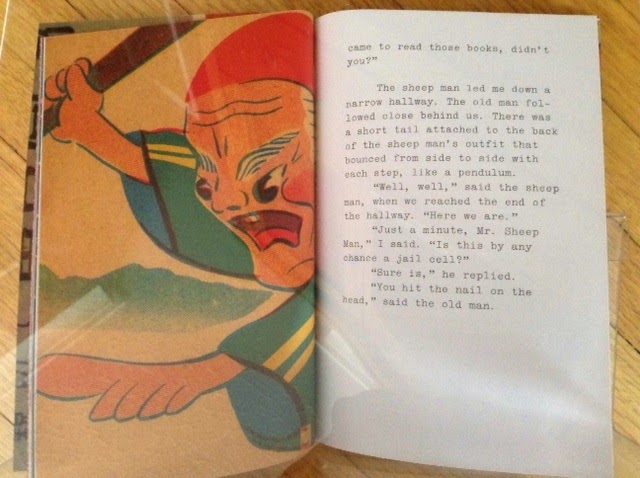 Designer Chip Kidd (for Knopf) combines magnified, brightly-coloured Japanese paper miscellany, and photos, with text in oversized Typewriter font. The mute girl's dialogue is printed in blue ink.
An effective series of illustrations begins with the close-up of a dog's eye, then incorporates a bird image that becomes increasing larger in the pupil of that eye. The moon is an important story element and I like the way Kidd includes it throughout. The overall effect is playfully moody in a fun-house-horror kind of way.
Designer Suzanne Dean (for Harvill Secker) has opted for a standard serif font (maybe Dante? which, now that I think of it, would be appropriate for the name alone). The size of the text changes to emphasize words and sometimes is incorporated into illustrations. The lens of vintage eyeglasses magnifies a few letters on one page, for example. The mute girl's dialogue is in angled brackets, like a foreign language.
According to an article* I read online, Dean selected old images from the British Library. As with Kidd, some of the images are greatly enlarged. In both editions, experimentation with size contributes to an Alice in Wonderland-like feeling of disorientation.

The heavy use of black, plus pictures of insects, looming black dogs, and angled walls of books, give it a surreal, sinister atmosphere. Together with the marbled endpapers and an actual date due book pocket stuck to the front cover (brilliant!), the effect is of an arcane volume, unearthed from the stacks.
In their own way, each edition does a good job of emphasizing one of the central themes: coping with fear. I cannot choose which one I like better. I'm a huge fan of Chip Kidd, yet the UK edition may become my favourite simply because I will read it more often.


"The kiss had shaken me up so much I couldn't think straight. At the same time, my anxiety had turned into an anxiety quite lacking in anxiousness. And any anxiety that is not especially anxious is, in the end, an anxiety hardly worth mentioning."

If you are already a fan of Murakami's writing, you won't need any encouragement to pick up this lavishly illustrated little gem.

If you haven't yet dipped into his still waters to discover the hallucinations lurking beneath, then The Strange Library is a good test to see whether examples among his works that lean towards the bizarre--like The Wind-up Bird Chronicles--are for you. If you prefer more realism, Murakami's Colorless Tsukuru Tazaki and His Years of Pilgrimage might be more to your taste.