She of the Mountains by Vivek Shraya 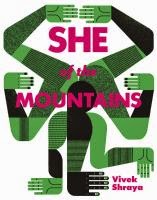 Edmonton-born author Vivek Shraya's complex exploration of queer identity in She of the Mountains layers Hindu mythology with contemporary life. Episodes from the life of Parvati, mother of the universe, alternate with scenes from the life of a South Asian boy coming of age in Canada.

I'll start with the book's striking design. Raymond Biesinger's stylized green and black artwork illustrates the text and emphasizes its quality of universality. Green is a colour of growth and transformation, so the bright green pages that divide the novel into sections also contribute a layer of symbolism.

Parvati is a goddess, yet she suffers in ways that humans understand: grieving over the death of her children; feeling conflicted loyalties; emotionally wounded by her husband Shiva. Her sections are told in first person, making her story fresh and immediate.

In her incarnation as the mortal Sati, Parvati yearns for blue-skinned Shiva:

"As the prayers continued, I gazed at the fire ahead, comforted by the only presence in the room that understood my burning sense of betrayal and disappointment.
[...]
Contemplating my misfortune, I became mesmerized by the streaks of blue in the flames until all I could see was blue.
Shiva! There you are! I knew you would come, I said. I stood up and walked into the fire, arms open. This was the end of my human life."

The contemporary sections are in third person, following an unnamed boy who grew up in a Hindu family in Edmonton. Gay is an invective used against him when he was too young to even understand the word. The way that bullying squashes human potential is made poignantly clear.

"[He] stopped seeking pleasure altogether. His world was reduced to bare necessity. Home was where he slept and ate, and school was where he learned.
He graduated from high school amorphous, his teenage body and its vast possibilities left on the unpaved field where it was first attacked."

At university, he comes out and and finds community at The Only Gay Bar in Edmonton. Then his life is once again in turmoil, because he falls in love with a woman. Bisexuality is not sanctioned. He is told: "Honey, we all liked girls at one point. But the Bi Highway always leads to Gaytown."

She has skin like his own and their shared browness is a revelation: "Falling in love with her brown had unexpectedly given his own skin new value, a new sheen."

"White was almost every interaction he had, and through this relentless exposure, he learned to value it, serve it, aspire to it, his white bedroom walls plastered with white famous faces. This was where the true power of white resided."

The new couple do not fit into the gay community, yet he cannot disavow the gay aspect of himself either.

(I've heard that last sentiment more than a few times.)

Being human is a complicated and lonely affair. This short, sensitive novel is a fine example of the way we can reconcile contradictions and establish a sense of self-worth.

Companion reads (with links to my reviews): God Loves Hair is Vivek Shraya's first book; Ramayana: Divine Loophole by Sanjay Patel, for another brief and informal retelling from Indic mythology, combined with stylized art; The Palace of Illusions by Chitra Banerjee Divakaruna, to get immersed in a longer retelling from Indic mythology; Boyfriends with Girlfriends by Alex Sanchez, for another exploration of bisexuality.

Thank you to Arsenal Pulp Press for providing me with a review copy of She of the Mountains.
Posted by Lindy at 11:22 AM