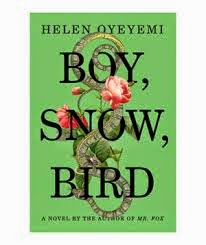 Helen Oyeyemi amazes me with every new book. I admired The Icarus Girl and adored Mr. Fox.  Now, I wonder how Oyeyemi could possibly get any better. Boy, Snow, Bird is perfectly brilliant. It's an inspired re-imagining of Snow White, set in 1950s Massachusetts, exploring racism and gender identity.

A girl named Boy runs away from her violent father, a rat catcher in New York City. Boy eventually marries a widower named Arturo Whitman and becomes stepmother to his daughter, Snow. Arturo and Boy have another child, Bird.


Bird:
"Mom looks foreign, like a Russian ice skater; her backdrop ought to be one of those cities that has a skyline topped with onion-shaped domes. I can just see Mom whizzing around with her hands inside a huge white muff, bloody sparks flying up behind her as the blades on her boots dig up all the hearts she broke before Dad got to her."

"I couldn't make up my mind whether the baby was male or female; the only certainties were near baldness and incandescent rage. The kid didn't like its blanket, or its rattle, or the lap it was sat on, or the world... the time had come to demand quality."

"I was new to champagne, but as soon as I tasted it, spark after golden spark, I thought, well, there's magic in this water, no wonder Mia said to wish on it."

Alecto (owner of the bookstore where Boy works):
"[M]agic spells only work until the person under the spell is really and honestly tired of it. It ends when continuing becomes simply too ghastly a prospect."

I remain under Oyeyemi's magic spell.