The City and the City by China Mieville 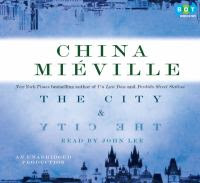 Gavin and a guest host, author Tom Pollock, talked about audiobooks in episode #79 of The Readers podcast (July 30 2013). Tom recommended China Mieville's The City and the City, narrated by John Lee [Books on Tape: 10.25 hours]. He reminded me of how much I also enjoyed this particular audiobook, although I never got around to blogging about it until now.

I listened to it back in December of 2011, so I don't remember many plot details. The intriguing premise is that two cities exist in the very same spot, in a sort of time/space overlap. It's the only place like it on Earth, and it is located somewhere vaguely Turkish or Balkan. A murder investigation is complicated by a question of jurisdiction. Did the death occur in one city and was the body then moved to the other place? (This problem of jurisdiction is a little bit like the crime committed in Erdrich's The Round House.) Anyway, it means that representatives of two different law enforcement agencies must cooperate, uneasily. Then, more complicated illegal activities come to light.

My listening experience was unique because I made a mistake when I downloaded the CDs to my computer, made a playlist, and then transferred it to my iPod. The tracks from CD 5 and CD 7 got interfiled, meaning that I listened to about 3 minutes from one part of the book and then 3 minutes from a later part and then back to the earlier part and so on, back and forth. Instead of waiting until I could fix the order, I was too caught up in the story and decided to continue with it as it was. It happened that events on CD 5 took place in one city, while events on CD 7 were in the other. That (and John Lee's narration) helped me to successfully follow both storylines. It also reinforced the setting Mieville created, with two cities simultaneously coexisting.

It's a fascinating book and I wholeheartedly agree with Tom Pollock's recommendation. (There's no need to replicate the weird order in which I listened to it, however.)
Posted by Lindy at 4:03 PM