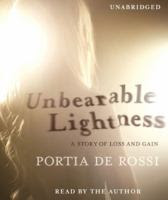 Even someone as uninterested in Hollywood celebrities as I am is familiar with Ellen Degeneres, who might be the most famous lesbian in North America right now. So a decade ago, when Ellen got together with actress Portia de Rossi, and later married her, of course I paid some attention. Still, when I listened to de Rossi's memoir, Unbearable Lightness: A Story of Loss and Gain, I had to search Google images. I only had a vague idea of what she looked like: tall with long, blonde hair.

Evidence of de Rossi's battle with anorexia and bulimia is there in the images online. In some, she looks almost skeletal. In Unbearable Lightness, de Rossi documents her dieting extremes. She subsisted on 300 calories a day for a long time, collapsing from starvation while filming Who Is Cletis Tout?. She went from 82 pounds to 168 pounds in 10 months.

When de Rossi was 12, she began modelling professionally in Australia. That is also when her problematic relationship with food began. She came to the US for an acting role in Sirens and ended up staying in California, where she could further her acting career. In addition to taking control over her body with extreme dieting and exercise, she changed her accent and was careful to remain deeply in the closet. She narrates her own story in the Simon & Schuster audiobook with no remaining trace of an Australian accent.

I was struck by the hateful force of the drill sergeant in de Rossi's head, the internal voice berating her for being a fat, lazy dyke. The voice ordering her to run up seven flights of stairs again and again in order to burn off the extra calories from a pack of no-sugar gum. It was painful, at times, to feel what it was like to be inside of de Rossi's illness. She had such a fear of consuming any fat, for example, that she hand washed fresh-out-of-the-dishwasher dishes before eating off them because they felt greasy to her.

The final CD, disc 8, is mostly epilogue; the long healing process. De Rossi gets rather mushy talking about Ellen, the love of her life. It is good to learn, however, that de Rossi is now accepting of her own self, not trying to be someone she is not.

Whether you are interested in lesbian lives, celebrity memoirs, or insight into eating disorders, I recommend Unbearable Lightness.
Posted by Lindy at 7:51 PM

Yes agreed... smart touching book that was a real eye-opener for me, I recommend it highly.

I love this book. I came across it when working on my own memoir of becoming bulimic as a result of struggles with my own sexuality and with coming out. Portia de Rossi offers the reader a stark look inside the tyrannical mind of the anorexic.

Thank you, Brahm and Natasha, for your comments. Natasha, I plan to check out your memoir soon.

Ooh, how thrilling! Thank you, Lindy. I published my book at the end of March and have not as yet featured on a booklover's blog, so even the thought that this might happen is pretty exciting. ... Gulp. The number of books you devour is quite staggering..

Natasha, I've yet to figure out how to get a copy of your book. Is it only available in e-format? Also, since you are interested in memoirs of eating disorders, you might enjoy Nadia Shivack's Inside Out: A Portrait of an Eating Disorder, which is told partly in drawings and comics that she created on napkins and other scraps of paper while receiving treatment.

Hi Lindy, Yes, it's a Kindle book at www.amazon.com/dp/B007NZRQAC, selling at 99 cents. I've roped myself into their 'Select' program till the end of September, so am not allowed to send out copies till that's over. I'm planning to go the Smashwords route after that. I'll be doing a free promo at some point soon, so can let you know what days this will be. I personally don't have a Kindle, but do read Kindle books on my netbook and on my Windows phone.

Thanks for the ED memoir tip-off. I'll check it out. 'Purge: Rehab Diaries' by Nicole Johns contains quite a few graphics from her time in a treatment centre too.

... I obviously haven't got my self-promotion hat on today, have I. ... Doh. My book is called 'Lesbian Crushes and Bulimia: A Diary on How I Acquired my Eating Disorder' and the website is www.lesbian-crushes-and-bulimia.com, which contains quite a bit of information about it. Thanks so much for your interest, Lindy.

Natasha, your self-promotion has been working from your first comment here because your name links to your book website. I read e-books on my iPod or laptop occasionally, but I don't have a kindle, so I look for epub and pdf formats. Smashwords is format-friendly. Do keep me posted!

I've made a note, Lindy. Once I'm out of the Select program and onto Smashwords, I'll send you a copy. Many thanks :-)
Natasha

That would be great! thanks.

Hi Lindy,
I'm now out of the Kindle Select programme and can email you a PDF or epub of my book if you drop me a line at natasha@lesbian-crushes-and-bulimia.com.
Thanks,
Natasha

Natasha, I got it! Thanks so much.