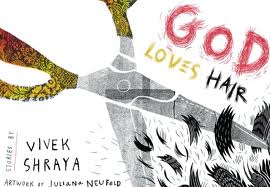 In a charming collection of vignettes about his childhood in Edmonton, Vivek Shraya explores the concepts of identity and belonging. His brown, South Asian skin and his pretty appearance made Shraya a target at school: "I learned which hallways to avoid (faggot) and which faces to avoid (if you ever look at me again, I will pound the shit out of you, you fucking fag)."

Shraya found weekly comfort when his family attended a Hindu place of worship. "No matter what has happened during the week or what I've been called, I am only a few days away from Sunday." Other members of the congregation recognize that Shraya's gender nonconformity sets him apart, but on Sundays, he basks in their approval of his religious devotion.

Shraya survives it all and demonstrates a great compassion for his younger self. Each brief story is introduced with artwork by Juliana Neufeld, adding piquancy and fleshing out this little 90-page gem. The book was selected for this year's ALA Rainbow Project of GLBTQ Books for Children and Teens and has also been shortlisted for a Lambda award. It is available through Shraya's website.

Note added November 2014: God Loves Hair was republished this year by Arsenal Pulp Press.
Posted by Lindy at 10:42 AM

Thanks for the wonderful review, Lindy - I've been looking forward to grabbing a copy of this.