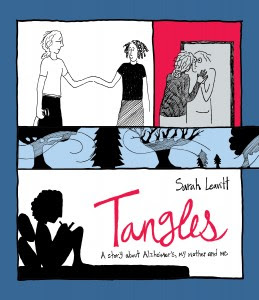 Sarah Leavitt's mother Midge was only 52 when she first exhibited signs of dementia. Alzheimer's disease was diagnosed a couple of years after that and Midge died when she was 60. In graphic novel format, Leavitt documents the progression of her mother's illness and the effect it had on their entire family.

Leavitt is a lesbian and lives in Vancouver, which is on the opposite coast from her parents in Fredericton, NB. Spending time with her mother meant a long day of air travel; this wasn't something she could do often. Leavitt took notes and drew pictures so that she would remember details of their time together. She also found herself collecting tangles combed from her own and her mother's ultra-curly hair, drawing emotional comfort in keeping it near her while she slept.

I was touched by Leavitt's honesty. She is sometimes irritable, selfish and unreasonably angry - in other words, she's human. At one point, Leavitt's father tells her she has the same quality as her mother: a radiant bitchiness. He says "It's a good quality to have." I agree. Leavitt is also a compassionate woman with a strong and tender love for her mother. The sketch-like artwork helps to keep emotion from overwhelming this touching memoir.

Readalikes: Mom's Cancer by Brian Fies and Fun Home by Alison Bechdel. Tangles is on the longlist for the Alberta Readers Choice Award, along with White Shirt, Too Bad and other great books published in this province.