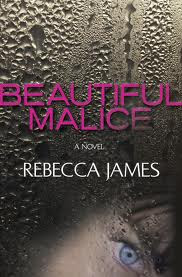 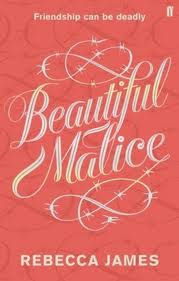 There was a lot of buzz earlier this year in the online book world about first-time Australian author Rebecca James and her psychological thriller, Beautiful Malice. The manuscript was turned down by a large number of publishers before finally being pulled from a British slush pile and sold for big money at the Frankfurt book fair last year. I looked forward to hearing James at the writers fest in Vancouver and was excited that a library copy of the book came in on hold for me just days before I left for Vancouver.

It was quickly apparent that the copy I was reading had been heavily edited. For reasons I don't understand, Edmonton Public Library purchased the U.S. (Bantam) edition of the novel. All of the references to the original Australian setting had been expurgated and replaced with generic locations like "city" and "countryside." Setting is important to my reading experience and helps me to see the story screening like a film in my head. I puzzled over which American cities might actually fit with the bit of description left (it was on a coast or lakeshore) and also accessible to a weekend getaway in the mountains for the rare treat of seeing snow. I could guess that Sydney and the Blue Mountains were part of the original setting, but where in the U.S.A. could this same scenario play out? All this wondering detracted from the plot and I found the story disappointing.

Then I heard James read at the festival. The passage was riveting. I loved the immediacy that came through with the original words which included Aussie lingo and place names. Afterwards, I purchased the U.K. import edition (Faber and Faber) that was available at the festival bookstore and read the book a second time. What a big difference! It was great.

The novel is about a toxic friendship between two teens in their final year of high school. Katherine Patterson changed her name and moved to a new city in order to escape the sorrow, guilt and notoriety connected to the death of her younger sister. At first, Katherine was grateful when popular Alice Parrie chose her as a special friend. All is not as it appears. The first line of the prologue - "I didn't go to Alice's funeral" - reveals the outcome, but it is the journey there that is increasingly horrifying.

At the festival, I asked James about the editing process. She said the U.K. editor asked her about making a single change: semi-trailer to lorry. The editor of the Canadian edition considered changing doona to duvet, but decided to leave it in for the Australian flavour. (I noticed that lorry was switched to eighteen-wheeler in my U.K. import edition.) James said the American editor did not consult her on any changes. Tim Tams switched to Oreos and a boyfriend with an American accent switched to one with an Australian accent are examples of the changes sprinkled throughout. More follow.

Sydney and its landmarks - Circular Quay, the Rocks, Bondi beach - in the U.S. edition just become 'city,' harbor,' and 'water.'

Alice "speeds along, weaving in and out of lanes much faster than any P-plater is officially allowed..." (The U.S. edition cuts reference to driving with learner licence plates.) Katherine feels silly when her boyfriend sees her in her school uniform. (Also cut from U.S. edition.)

Katherine's parents worry for her safety and insist on replacing her old car, a Volvo, with a Peugeot. (U.S. edition substitutes a Honda - car with a very different status implication than a Peugeot.)

Coffs Harbour is rejected by Alice as a getaway destination. "No good restaurants." (U.S. edition doesn't refer to any specific place, just "I don't want to go there" because "there's no decent food.") In the end, the friends choose a four-hour drive to Merimbula. (U.S. edition simply calls it 'the beach' without any reference to distance.)

A trip to Jindabyne after the mid-winter rush becomes simply 'the mountains' in the U.S. edition without any reference to season.

References to the upcoming Higher School Certificate exams and the importance of studying for them are downgraded entirely to "I probably should be at home studying" in the U.S. edition, without specific mention of any exams.

When asking a stranger for a ride home from a party in Melbourne, Katherine says, "We live in Toorak." The driver replies, "Toorak. Yeah. Nice place, that. Real nice place. [...] Wouldn't mind a drive out that way." (U.S. edition removes the original context of a wealthy neighbourhood: "We don't live far away, just east of town." And the driver replies, "Not far, huh? Sure. I bet you two live in a nice place. A real nice place. [...] Wouldn't mind a drive.")

That's enough. Cutting out all the Australian references and a tighter layout reduced the number of pages from 353 in the U.K. edition to 256 in the U.S. one. I don't know what the American publisher was thinking. That Americans are too insular to be interested in stories set outside their borders? That unfamiliar place names and products will alienate readers? Please leave your comments below. Read this book, but avoid the bland U.S. edition if possible.

Wow. I had no idea the editing was so extensive for the US edition. Another Aussie one that got (slightly less) vandalised is Michael Gerard Bauer's _Don't Call Me Ishmael_; after reading it you might be forgiven for assuming there is a roaring American football tradition in Australian schools.

Incidentally, Rebecca James sister's (Wendy James's) book, Where Have You Been, is published by an Aussie press and I don't think has US rights - so you could read that in unadulterated form.