Behold the Awesome Books of March 2017 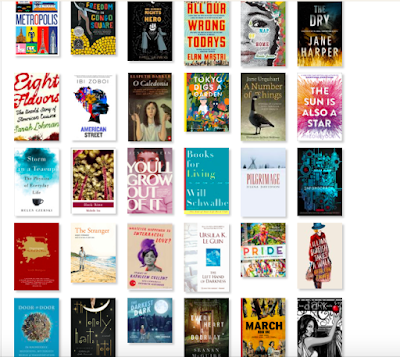 March might have been my best reading month ever. Out of 30 books, I gave five stars to 15 of them. So many great books! Do I know how to pick them, or what? Read on for highlights.

(Strangely, titles and authors beginning with the letter "O" have been prominent in my reading life.)

If I describe this as a coming-of-age story set in mid-twentieth century Scotland, that sounds kind of ho-hum. It was Ali Smith's glowing recommendation that inspired me to pick it up, and then, as soon as I opened it and began to read about a teenager found lying dead on the stairs in her family's crumbling castle, I was hooked on the tale of what brought her to that point. Unforgettable.

"Pudding today was pink junket, the delicacy so relished by Miss Muffet; it reminded Janet of the blanching rabbits in the kitchen bowl, but she had perfected a way of ingesting it with almost no physical contact by tipping tiny fragments into the very back of her mouth and swallowing quickly. Soon the ordeal was over."

"Her name was dreadful too; all the others had names with some romance about them; even Rhona had a suggestion of inappropriate turbulence, a tawny river in flood rushing and foaming about its boulders. But Janet had nothing; its only possible association was with junket."

Best Essay: Ongoingness: The End of a Diary by Sarah Manguso

Will Schwalbe wrote that someone once told him that if you want to know what a book is really about, just read the last word. Manguso's thoughtful, gorgeous memoir is a chronicle of her journey through anxiety to mindfulness, and learning to trust in the future along the way. Last word of her main text: now- [with no further punctuation]. Last word of the afterword: faith. That worked! (Try it with something you've just finished.)

"And then I think I don't need to write anything down ever again. Nothing's gone, not really. Everything that's ever happened has left its little wound."

"Before I had the baby I remember feeling tired all the time. But after he joined me I could spend four days in two rooms, pyjama-clad, so tired I was almost blind."

Two women use storytelling to outwit cruel and rapacious men. Scheherazade, a creation myth, a moon mother, the 12 dancing princesses... Greenberg draws on tales from around the world in this funny, feminist graphic novel, illustrated in a wood-cut style.

"These women must be charged with sorcery, witchcraft, reading and sassiness! Their behaviour is INTOLERABLE!"

Cyberpunk. Political thriller. Global adventure. High-concept science fiction. However you classify this, it is compelling. If you like novels by William Gibson or Cory Doctorow, check this out.

"The Singapore hub was funded by the massive settlement accorded after People versus Coca Cola et al, the civil action when Americans realized that diet soda was depriving them of their right to be thin."

I've been meaning to read this for ages, then my YA book club picked it for March and also there was a "March in March" group project on Litsy, the social media app for readers (where I hang out a lot). It is outstanding. Early life and civil rights nonviolent activism of legendary American politician John Lewis. Emotionally difficult material, very well presented. Powerful artwork. Inspiring! There are two more volumes in this autobiography that I look forward to. 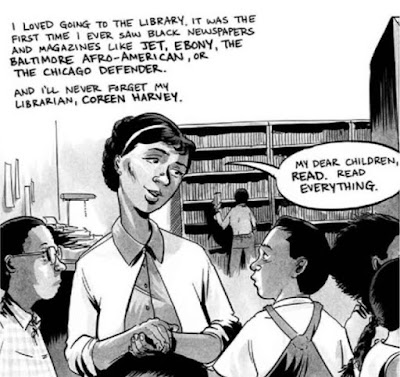 Warm and inspiring. Will Schwalbe is my soulmate. We grew up in the same era. We're both queer. We both read books in search of answers about how to live our lives. We've read many of the same books. I only wish I could write as well as he does about the effect books have on our psyches.

"Has any book saved my life? I think it would be more accurate to say that books like James Baldwin's Giovanni's Room helped me choose my life. If it hadn't been for the books I read, I would have wound up with a life very different from the life I now lead. Books saved the life I have."

"You can leave the books that you don't like alone, and let other people read them." [quoting ancient scholar Yuan Chunglang.]

"The greatest gift you can give people is to take the time to talk with them about a book you've shared. A book is a great gift. The gift of your interest and attention is even greater."

Tea is a longtime favourite of mine and she is at the top of her game in this one. Vigorous, generous, lusty prose - that alone is enough to charm me through the gritty alcoholism, promiscuous sex and - sure, why not - heroin too. Michelle is pretty much the same herself as in her memoirs and autobiographical fiction... except in third person. Then, in the second part, she moves from San Francisco to LA and it gets even better - all meta and how-do-you-write-your-own-story. And then the apocalypse began.

"Imagine, to stop worrying about money! Michelle was born into such anxiety, it had been her placenta, the water breaking between her mother's legs, dollars and coins scattered on the ground."

"'What's the book even about?' Quinn asked. 'If you've removed the main story.'
Michelle wasn't sure. Couldn't a book just be about life? Me, My Alcoholism, I think. The Nineties. Being Poor. The Feeling Of It All."

Loosely based on poet and advertising copywriter Margaret Fishback, the Lillian Boxfish of this novel is a character I adored: forthright and witty, yet also respectful and open-minded. Her life story unfolds of the course of a 10-mile walk through the streets of NYC on New Year's Eve 1984, when she's 85 years old. She has such great interactions with people along the way. Hooray for feisty old ladies!

"I thought at times that poetry might be an elegant way of screaming."

"For though I was raised Protestant, my true religion is actually civility. Please note that I do not call my faith 'politeness.' That's part of it, yes, but I say civility because I believe that good manners are essential to the preservation of humanity - one's own and others' - but only to the extent that that civility is honest and reasonable, not merely the mindless handmaiden of propriety."

I thought this Governor General award winner would be a retelling of Virginia Lee Burton's The Little House, because it starts off similar, but no. This is a much better version of happily-ever-after, because instead of having to leave an urban environment to find happiness, nature conquers the city. Yay! A subversive Canadian picture book that will make readers of all ages smile.
Best YA (tie): American Street by Ibi Zoboi
[audio 8 hr 38 min; narrated by Robin Miles] and
The Sun Is Also a Star by Nicola Yoon [audio 8 hr; narrated by Dominic Hoffman, Raymond Lee and Bahni Turpin]

For age 9 and up. It's especially nice that this Stonewall Honor* award winner includes lots of young people in historical and world contexts. For example, we learn that trans woman Sylvia Rivera, who was in the first Stonewall riot, was kicked out of home and living on the street at age 10. A contemporary 12-year-old Canadian has filed a human rights complaint arguing for removal of gender designations from all birth certificates. Lots of bright photos celebrate diversity.
*Awarded by the American Library Association for GLBT books. 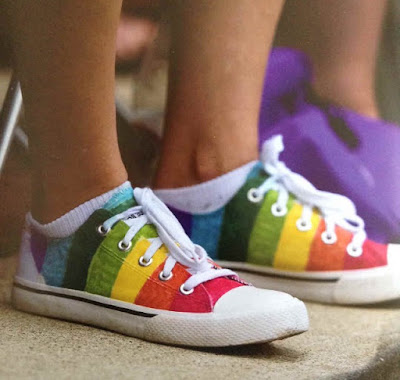 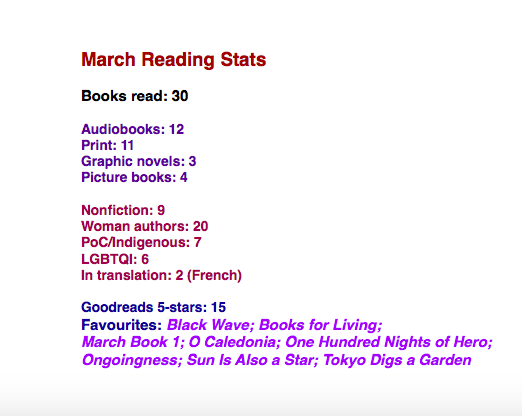 Black Wave will surely be one of my best reads of the year!

Oh wow! Thanks so much. I'm so glad that you enjoyed Lillian's amazing journey. Rooney wrote such a beautiful novel...